Watch Three Yellowtails Rub themselves On a Shark

For Southern California locals, it’s not uncommon to see sharks on the coasts, mainly because it’s their natural habitat. In fact, California is the third state in the United States with the most shark attacks. Yet seeing three yellowtails rub themselves on a shark is less common!

The presence of sharks is usually depicted as dangerous for humans and animals. However, this scene is different. Three yellowtails are using a shark to get a body scrub! All three yellowtails follow the white shark, trying to rub themselves on its skin.

Getting a body scrub from a predator is not one’s ideal spa day. These three yellowtails still need to be cautious and alert, ready to leave once the shark decides spa day is over. In the video, we can spot the moment the three yellowtails flee from the shark, just a split second before the predator whips its tail.

The video then cuts to the next scene—the shark is investigating and swimming dangerously close to paddleboarders. Luckily, the shark has no plans to attack. It is simply sizing itself against the paddleboard. Paddleboarders should always try to stay close to each other to make themselves appear bigger and discourage sharks from attacking.

The video demonstrates the surprising symbiotic relationship between sharks and other smaller fishes, mainly yellowtail fishes. What a fantastic display of nature!

What Is Shark Chafing?

Even sharks are known to demonstrate chafing against sand or rocks. However, shark chafing is an incident in which marine prey, such as smaller fishes, actively seek out sharks to rub against them.

Experts suggest several reasons for the new role of sharks as exfoliators for marine species. Chafing against sharks can help remove parasites and bacteria that live on smaller fish’s bodies because sharks have rough skin called placoid scales or dermal denticles.

Another possible reason is that rubbing against the sharks’ rough skin may give other fishes some pleasure. It’s similar to terrestrial animals who love to rub their bodies against rough objects to relieve an itch.

Watch A Jaguar Fight An Anaconda In Brazil 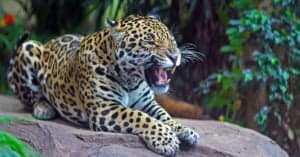