Written by Katie Melynn
Published: November 23, 2022
© Hit1912/Shutterstock.com
Share this post on:
More Great Content:
What Lives At The Bottom of The…
Discover 6 of the Clearest Rivers in…
How Deep is the Missouri River?
How Deep is the Mississippi River?
The 15 Largest Rivers in the World
What Direction Does the Nile River Flow?

Without sound, the video footage of a large tornado on the Mississippi River takes on an extra spookiness. Amid dark skies and heavy winds, the viewer watches as the tornado crosses over the river, leaving a trail of destruction behind it.

The Mississippi River runs right through the city before dumping into the Gulf of Mexico. The Mississippi is the second largest river in the United States, falling short of the Missouri River by 21 miles.

In the video, the funnel cloud begins near the river. David Mark Poindexter, credited with filming the tornado, is in an industrial-looking area overlooking the river. The swirling clouds gather speed and intensity as they move across the river.

Above the actual tornado is a dark storm cloud that takes up most of the sky in the video. Tornadoes begin when cold and warm air collide to create an updraft. Thunderstorms often come before tornadoes, just like in this video.

The winds are clearly high since the video is shaking. This is another common phenomenon that happens during tornadoes. High winds begin to rotate, causing the distinct funnel cloud that is a tornado.

Roughly halfway through the footage, a bright burst of lightning appears. The entire screen brightens to an eerie blue as the electricity crackles in the air. You can see the bolts radiating from the dark storm cloud toward the ground below.

The tornado crosses to the other side of the river, continuing on land as it goes. Some people think that tornadoes cannot cross rivers or other bodies of water but that could not be further from the truth.

In fact, this isn’t even the first time that a tornado has crossed the Mississippi. In 1840, a tornado in Natchez, Mississippi traveled along the center of the Mississippi River. By the time it was done, 317 people were dead and 109 were injured.

There weren’t any reported injured or dead during this footage, although damage and destruction can be seen from a distance. 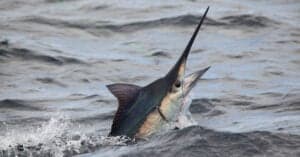