He’s tall and mature, and his name is Scot. Named after Nova Scotia, Scot was found just off W Ironbound Island in Nova Scotia, Canada. The ocean health group, OCEARCH, was able to sample, tag, and release him in September of 2021.

The video opens with a quick aerial shot of the boat that managed to pick Scot up. You can see the line going out toward him in the water as he floats along at the pace of the boat. Next, you see the enormity of Scott with a zoomed-in look at his face and teeth.

If you’ve never seen a great white shark get sampled and tagged before, the scene is confusing. It’s unclear exactly what’s going on and if Scot is okay. Don’t worry—we’ll explain.

There are several men on the deck with Scot—one is holding Scot in place while another uses a water pump placed directly into Scot’s mouth. Although it looks brutal, it’s actually meant to help Scot breathe better, reducing his anxiety.

The water pump essentially pushes crisp ocean water over Scot’s gills. This is only a brief interaction, while researchers gather a small blood sample. A tag is also placed on Scot to help understand him better, including his migratory patterns, which ultimately helps with shark conservation efforts.

The men work quickly and expertly, and you can see the moment when the tag is positioned over Scot’s first dorsal fin. These tags are designed to be inserted down into Scot’s muscle right by his dorsal fin. It should be inserted at an angle and is what allows researchers to track him after release.

The video shows Scot after he’s been tagged, still with the water pump in his mouth—he isn’t thrashing or trying to fight anyone off. He lays there as if agreeing to the shark conservation efforts. The next scene is of Scott swimming off under the water.

If you’re interested in learning more about Scot, the video shows a link where you can track him online. Some of the people in the comments share how they feel that Scot has become like a very, very distant pet that they enjoy checking up on once in a while.

Do Great White Sharks Normally Grow To This Size?

Though Scot’s bulk seems impressive, he is actually at the upper end of what experts would consider normal-sized for an adult male great white shark. And he would seem petite compared to some of the largest female great whites known to exist! Male great whites typically grow to be between 1,200 and 1,700 pounds. Some of the largest adult females of the species have tipped the scales at 5,000 pounds! Great white sharks build up all this heft with a steady diet of fish, crustaceans, seabirds, and marine mammals.

Scot is not the only member of the animal world whose size makes a big impression. Here are some of the other largest creatures that slither, swim, and crawl.

Discover the Biggest Shark Ever Caught Off Florida 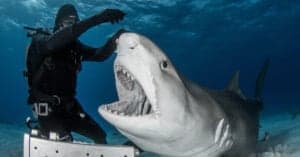 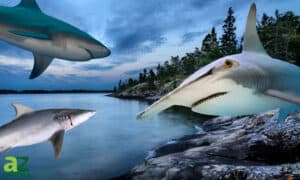 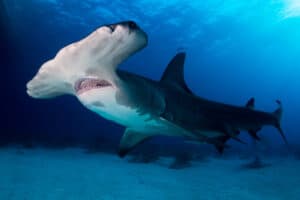