Yellowstone National Park is the world’s first national park. Established in 1872, it encompasses 2.2 million acres of an intact ecosystem that attracts visitors from all around the globe. In Yellowstone, you encounter active geysers, geologic wonders, and plenty of wildlife.

Yellowstone is home to several different carnivores, including black bears and grizzly bears. Grizzlies are currently listed as a threatened species and as of 2017, an estimated 728 grizzlies reside in Yellowstone.

These bears are massive creatures, with the males weighing anywhere between 200 and 700 pounds and the females weighing between 200 and 400 pounds. They can run up to 40 miles per hour, and their food sources include elk calves. They’re surprisingly agile, able to run up and down hills, swim, and even climb trees.

“Oh, here he comes!” you can hear a woman say in the background as the cameraman captures footage of a grizzly barreling down a hill toward a large group of elk. It takes a moment for the elk to spot it but when they do, they keep moving.

This video was taken in Hayden Valley, Yellowstone National Park.

The onlookers talk among themselves and watch as the bear makes it down the hill and then up the next hill toward the elk. When they spot it getting closer, they run off in unison, with some elk calves protected within the group.

The next scene shows the grizzly has made it up the hill—the speed with which it runs is startling. It keeps making its way down the hill, taking some moments to pause and stalk before charging again.

The next scene captures a grizzly scaling up a mountainside. It’s unclear if it’s the same one that was charging toward the elk earlier. It doesn’t appear to be particularly interested in a specific target as it makes its way up. It pauses and looks around, likely looking for prey.

The video cuts to a final scene where you can watch a group of elk atop a mountain running off. Fortunately for them, they’ve made it through another day.

The grizzly’s speed when charging the elk is undeniably disturbing. The visitors to Yellowstone were at a safe distance to be able to take in this incredible wildlife scene but the mere thought of a bear running toward you at that speed would make anyone reconsider a visit to grizzly territory.

There are several reason a grizzly might chase a group of elk out of its range. Females protecting their young are likely to want the elk out of the vicinity of her cubs. Grizzly bears also eat Elk calves and this bear was likely hoping to be able to separate one of the calves from the rest of the herd. Elk are fast and wary though, and not easy to sneak up on. It looks like this bear went away hungry on this day. Let’s hope all the tourist kept their distance!

Are You Fascinated by Grizzlies as Much as We Are? Check Out the Videos Below: 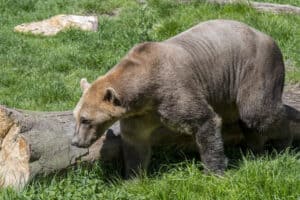 Discover the Pizzly Bear – A Hybrid Between Grizzlies and Polar Bears