iStock.com/VilliersSteyn
Share this post on:
More Great Content:
Cocky Jackal Bites Male Lion's Tail in…
Lions vs Tigers - 5 Key Differences…
How Long Do Lions Live: The Oldest…
Watch A Lion Hunt The Largest Antelope…
How Many Lions Are Left In The…
Animals That Can Kill a Lion

Crabs are cute little crustacean creatures. They mostly feed on algae, and you can usually spot them walking sideways as if making their way through a crowded bar. But interestingly, this is not the only way they can walk. Although you may not see it often, crabs can also walk forward and diagonally.

The thing is, walking sideways is the most comfortable and fastest way for crabs to get around. This is because they have stiff, jointed legs that prevent flexible movements. Walking sideways is just more efficient for them.

In this video, you can see a crab walking sideways, doing what it does—but there is quite the apex predator over to the right. A lion.

A woman can be heard behind the camera saying, “Brave little crab.”

The crab continues its sideways walk away from the lion who is lying down, watching it intently. The lion stands up to approach it and the crab reacts instinctively with a defensive posture. It turns to face the lion with its two front claws up high.

It’s putting up its fists, so to speak.

With this view of the crab next to the lion, you can see just how tiny it is compared to this predator. It’s much like a spider to a cat—and if you have a cat, you’ve likely seen a similar encounter unfold. The big cat is curious and approaches the crab non-threateningly. However, the crab can’t discern between curious and predatory behaviors.

As the lion walks forward, the boldest crab ever keeps its claws up in defense mode and walks backward, using the rest of its stiff legs, making sure they don’t get in the way as it maintains balance on the sand.

The lion, calm and curious, lies down in front of the crab again with paws spread forward. The crab backs up with its claws still up and turns to get away from the lion. Unfortunately for the crab, the lion is part of a pride that is just as curious.

The video continues to document the crab’s escape away from the lions. The lions, entertained by this small crustacean, perhaps don’t realize they are scaring the daylights out of it.

It’s a young lion pride and they stalk the crab closely, approaching it with menacing paws but never making contact with it. A single curious or playful paw could destroy the crab, but they just observe from a distance—a distance nobody would be comfortable with but a distance, nonetheless.

By the end of the video, you watch as five lions part ways with the crab as it finds some tall grass to hide in.

Up next, more lion encounters! 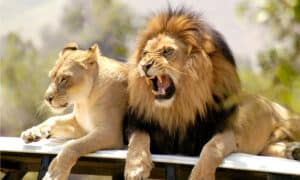 How Many Lions Are Left In The World?