Watch This Puppy Make an Unbelievable Escape From a Crocodile Pit

Certainly, there are few things more endearing than puppies. Even if you’re not much of a dog lover, a puppy undoubtedly inspires a protective instinct. They’re clumsy, innocent, and have boundless energy. And, no doubt, seeing a small pup in a life-or-death situation makes you hold your breath. It’s as if by sucking in air, they can somehow influence the situation for the puppy’s benefit!

This video starts with a split screen. It’s one of those reaction videos where you witness somebody else having an emotional experience as they watch the original video. These videos are fun to watch. They help you have a sense of connection with one another as you both watch something that may be a bit shocking.

In the center of the video, some subtitles say “crocodile vs. dog” with a crying emoji. It’s not long after the video starts that you start seeing a bit of commotion in the top video. This original video shows a brick wall and some water where a puppy is attempting to jump onto a pipe to get over the brick wall.

There’s a ton of splashing in the water at the bottom of the video and a crocodile appears, making its presence known. It’s barely a few feet from the puppy and rapidly closing in on that gap. The puppy manages to balance itself on the white plastic pipe coming through the brick wall. Already, the situation is tense. One slip-up on the pup’s behalf and, in this situation, that’s its last mistake.

As you continue to watch, you realize there are several crocodiles in the water. This is a perilous situation for the pup. The puppy has the will to live and momentarily balances itself on that pipe. Without wasting time, it attempts to get over the brick wall with a single jump. It first uses its back legs to keep stability on the pipe as it reaches up to jump over the brick wall.

The music playing throughout the video is emotional, tugging at your heart alongside the video. The young man in the reaction video is with an orange cat and his facial expressions likely match your instinctual response. By and large, he’s worried at first. When he sees the puppy make it over the brick wall, he has a smile on his face and throws his hands up to celebrate.

Up Next, a Few More Videos That Keep You on the Edge of Your Seat:

The Flag of Taiwan: History, Meaning, and Symbolism 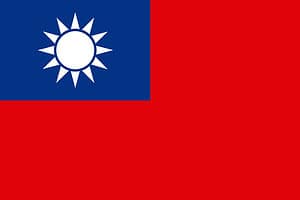