It almost sounds ridiculous. A woman swimming between the Hawaiian Islands is almost attacked by a shark. After all, most people would prefer not to know what is waiting for them under the blue waves of the ocean waters. In this case, though, one shark got a little too close for comfort.

The video starts by explaining the Kaiwi Channel Swim, calling it one of the most difficult open water swims in the entire world. This endurance swim occurs between the islands of Molokai and Oahu in Hawaii. It stretches along a 28.5-mile course and can take anywhere up to 20 hours to complete. Oh, and the area is home to sharks.

That means the swimmer must eat and drink in the water while they’re swimming, or they’ll run out of energy. Ranie Pearce, the swimmer in the video, was following all the right safety precautions. She had a team watching her from a boat, a support kayak staying close, and a drone watching out for anything unusual.

Ranie’s pace indicated she would finish the swim in about 17 hours, and the video shows her powering her way through waves. However, the captions then tell us that the kayaker spots a shark.

The video switches to the kayaker’s point of view and suddenly the terrifying Jaws theme begins to play. The video pans out again, highlighting the path of the shark as it follows the swimmer. The shark is behind her for a while, the preferred location for launching an attack.

For a moment, it seems like the video is setting up an encounter between the shark and the woman as the music persists. Fortunately, no attack comes. The kayaker puts their small boat between the swimmer and the shark, hoping to deter it until the larger boat gets to the area.

The boat travels around the swimmer in the water, trying to scare the fish with its size, noise, and wake. However, this shark was not going to be deterred. The team decides to end the swim rather than continue to risk Pearce’s life in the water. After all, the shark comes within a few dozen feet of her at one point.

Sadly, she had to pull out of the attempt. However, it was not worth the risk of getting attacked in the waters. Since then, Pearce has completed other swims like the Ice Mile and Cold Half Extreme Marathon Swim. She’s already renowned in the world of open swimming.

This video of a woman swimming between Hawaiian Islands and almost getting attacked by a shark is certainly unique. It’s a stark reminder that humans are just visitors in the water, and we’re often outnumbered and overmatched even before we know it.

Do you want to see videos of other times that sharks came too close for comfort? Then watch some of these videos: 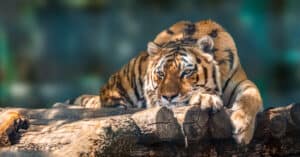