Written by Angie Menjivar
Published: October 5, 2022
© Keith Jenkinson/Shutterstock.com
Share this post on:
More Great Content:
See a Wildebeest Launch Itself Over Two…
Lions vs Tigers - 5 Key Differences…
How Long Do Lions Live: The Oldest…
Animals That Can Kill a Lion
This Lion Was So Big It Hunted…
Watch A Lion Hunt The Largest Antelope…

In the wild, tigers and lions don’t get along. But during those early impressionable years, baby lions and baby tigers can live together, sometimes displaying tenderness toward one another.

If these big baby cats were any bigger, you would have felt tension during the opening scene of this video. However, these are sweet little ones who display a playful nature and start with little smacks on each other’s faces and some gentle grunts as they enjoy one another’s company.

If you’ve watched kittens play, it’s just like that except you’re looking at a baby tiger and a lion cub. Just as cute and with much larger paws! These babes were filmed at an animal preserve called Kowiachobee, located in Naples, Florida. Both the baby lion and baby tiger are five months old in this video. Since they grew up together, they relate to each other as if they were brothers.

They house panthers, leopards, lions, and tigers and it’s not just the lions and tigers that sometimes share space. They’ve been established for over 15 years and sometimes take their animals off-site to special presentations and lectures, so others, including children, can learn about exotic and endangered animals. At first sight, you might think that these little angels could be perfect pets if they just stayed that size! But the truth is, they’re big cats and deserve a home in the wild or in an environment that protects them and honors their needs.

This video is just one example of how humans can create a safe environment for wild animals that need extra care. These two brothers (literally from other mothers) enjoy each other’s company as they continue play fighting, rolling about on the ground, and doing those sweet slow blinks that communicate how much they trust each other. It’s a short clip but one that gives you insight into how different species can coexist. Not just coexist, really, but bond.

Discover the Highest Point in Oregon 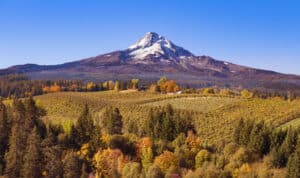