What Do Carpenter Ants Eat? Nope, Not Wood

Written by Jennifer Haase
Updated: October 13, 2022
© Eric Isselee/Shutterstock.com
Share this post on:
More Great Content:
What Kills Bed Bugs Instantly?
How To Get Rid of Roaches Overnight
Carpenter Ants vs Black Ants: What’s the…
Where Do Bees Go In The Winter?
The 10 Largest Grasshoppers In The World
Types of Beetles: The Complete List
↓ Continue Reading To See This Amazing Video

Carpenter ants nest in wood, but they don’t eat it. So what do carpenter ants eat instead? They have an interesting diet of sweet liquids and discarded parts of dead insects. Some carpenter ants also hunt live insects. And when these tiny foragers discover an abundant food source, they create a reusable trail of pheromones between it and their nest. This practice helps the ants live for many years.

Read on to learn more about what carpenter ants eat, plus some fascinating facts about their food sharing habits. We’ll also look at how the carpenter ant’s diet impacts the lives of humans and other species.

What Do Carpenter Ants Eat?

If they find their way into your home, carpenter ants will also eat sweets, meat, eggs, and animal fat.

Because dead insects are a great source of protein, these ants often forage for insect “roadkill.” Worker ants extract fluids from the dead insect parts they find, then leave the shell behind.

Like other ant species, carpenter ants have a sweet tooth. In addition to nectar and juice, they love sugary substances like tree sap and honey.

The carpenter ant’s preference for honeydew from aphids creates a strong bond between these two insects. Though they devour this sweet fluid every chance they get, carpenter ants don’t kill or eat the aphid itself. Instead, the ants stand guard over aphid colonies to protect them from predators like ladybugs and solder beetles. In return, aphids keep providing the ants with lots of honeydew for many sweet treats to come.

A carpenter ant can stimulate aphids to release honeydew by stroking their bodies with its antennae – an action called antennation.

What Do Baby Carpenter Ants Eat?

A queen’s first brood of carpenter ant eggs is fed secretions from her salivary glands. The queen survives only on her body’s stored nutrients pulled from fat and wing muscle during this time. After 60 days, the young ants become full-grown workers and begin scavenging for the colony’s food.

Here’s a fun fact: Once her first brood of ants grows up, they are solely responsible for feeding and caring for all the new eggs their queen lays.

Most carpenter ant species spend their day tunneling through trees and other wood sources to create the colony nest. Then the ants head out of the nest at dusk to hunt or forage through the night. However, they might sometimes look for food during the day in the spring and summer.

Feeding the colony is an act of collaboration. A special segment of worker ants does the foraging work. Together, they forage as a group and decide what food to bring back to the colony.

Black carpenter ants – one of the 10 largest ant species in the world – have a fascinating practice of food sharing. For example, worker ants tasked with foraging might extract honeydew from aphids. When they return to the colony, each forager can share the honeydew by regurgitating it from their mouth into the mouth of a fellow ant. This mouth-to-mouth feeding is a process called stomodeal trophallaxis. The ant receiving the food begins the trophallaxis process by showing its need for nourishment. They might do this via antennation, pawing, or twitching.

A carpenter ant’s role in the colony can influence how much food and what types of nutrients they receive or prefer. For instance, larvae don’t get as much food as worker ants, but they eat more amino acids. On the other hand, the worker ants (including hunters and foragers) eat more carbohydrates than everybody else. So who usually consumes the most protein? That would be the carpenter ant queen.

Who Competes with Carpenter Ants for Food?

When a carpenter ant forages for tree sap, it competes with other sap-sucking insects like mealybugs, whiteflies, and tree bugs. Aphids eat tree sap, too.

What Do Carpenter Ants Eat in Winter?

In colder climates, carpenter ants hole up in their warm wooden nesting grounds for the winter. Then, they enter a dormant phase called diapause and aren’t actively seeking more food until spring.

But not before bulking up on carbs in the fall. According to Northern Woodlands magazine, Carpenter ants observed during New England winters packed on 50% more fat than they store in their bodies the rest of the year. This extra padding helps keep them warm and nourished through freezing temperatures as low as 5 degrees Fahrenheit.

How Does Their Diet Impact Other Species?

Carpenter ants eat foraged insects and sweet fluids, but not structures made of wood. For this reason, you might think the ant’s diet doesn’t necessarily impact humans. Think again.

To see the connection, try answering this question: Which insect provides carpenter ants with one of their favorite sugary treats?

If you answered aphids who provide ants with honeydew, you’re right. We explained earlier in this article that carpenter ants fiercely protect aphids. But aphids suck the juice from a plant’s leaves and roots. Doing so can kill an aphid’s favorite plants, like garlic, coriander, petunias, and marigolds. In other words, aphids kill many of the plants humans grow in their vegetable and flower gardens.

So, yes – humans are impacted by a carpenter ant’s diet. Though you could argue that people benefit from their diet, too, because carpenter ants eat termites. As with many creatures in the ecosystem, carpenter ants impact our world with benefits that hopefully outweigh the detriments.

But if you hear sounds like crinkling cellophane in your walls, call the exterminator. Carpenter ants have probably moved in. 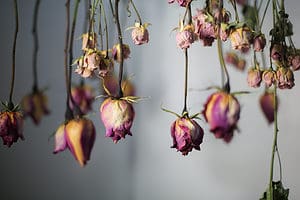