Written by Brandi Allred
Updated: January 24, 2023
© iStock.com/Hermis Haridas
Share this post on:
More Great Content:
Leopard vs Jaguar - The 7 Key…
This Young Leopard Hunting Has No Idea…
How Many Leopards Are Left In The…
10 Incredible Amur Leopard Facts
Next Level Leopard Somehow Catches an Eagle
10 Incredible Leopard Facts
↓ Continue Reading To See This Amazing Video

Leopards are known the world over for their distinctive spots and hunting prowess. Loved by some, feared by many, and recognizable to all; leopards live across Asia and sub-Saharan Africa. They are unique among cats in that they can survive everywhere from hot desert plains, to lush rainforest, to snow capped mountain peaks.

But just what is it about leopards that makes them so adaptable? Here, we’ll talk about what leopards eat, how they hunt, and even what zoos like to feed their captive leopards. Then, we’ll take a look at baby leopards, and what they live on for the first few months of life. Finally, we’ll touch on leopard conservation, and explore just how well this species is faring across the world.

Leopards eat a diet that consists of medium sized prey like jackals, impalas, warthogs, and hares. They are carnivores.

Leopards live across Africa and Asia. In many places they share territory, and prey, with lions, hyenas, tigers, African wild dogs, dholes, wolves, sloth bears, and cheetahs. Many of their competitors will eat only specific prey items (i.e. impala), but the leopard will hunt just about anything that makes an easy meal of itself. Because of this, leopards live in many different regions, and have a wider diet than almost any other cat. Some of the creatures leopards eat include:

Less commonly, leopards will eat larger game like giraffes and African buffalo. Leopards prefer medium sized game, and will eat almost anything of the right size. But they won’t say no to something smaller, like a hare or rat. Leopards living in the rainforest climates of southern Asia eat primarily warthog, deer, and small mammals. Leopards eat over 90 different species of animal.

How Do Leopards Hunt?

Leopards are nocturnal ambush predators. They are solitary hunters, and only come together to mate, though young leopards stay with their mother for up to 18 months. Leopards have excellent hearing and vision, and use these senses to spot prey.

Once a target is found, the leopard moves slowly in the direction of the prey. This behavior is called stalking, and cats of all kinds are well known for it. If you’ve ever seen a house cat stalk a toy mouse, you know the gist of it. The leopard stalks, using its spots for camouflage, until it is within 10-15 feet of the prey. Then, with lightning speed, the leopard pounces. If successful, the leopard clamps the animal’s throat or nose in its mouth and holds on until the unfortunate creature suffocates.

Leopards are unique among big cats not just for their spots, but for what they do with their prey once they’ve killed it. In order to keep their meal safe, and return to it in the coming days to snack, leopards drag the carcass into a tree for safekeeping.

What Do Captive Leopards Eat?

Captive leopards eat mostly carrion meat. Because they are obligate carnivores, they do not need to eat anything but meat. They don’t drink much water either, most of their moisture comes from the meat itself.

Captive leopards have no problem eating carrion meat. Most zoos feed their captive leopards locally abundant livestock meat like beef, pork, chicken, goat, or horse. Adult leopards need to eat between 6-8 pounds of meat per day, but only eat once every several days if they get a big meal.

Wild leopards typically live as long as 12 years, but captive leopards have been known to live much longer.

What Do Baby Leopards Eat?

Leopard kittens are born blind, furless, and toothless. They subsist solely on their mother’s milk for the first three months of life. The female leopard will often birth her kits in a den, rock overhang, or other protected, enclosed area. The kits don’t leave this protected den until they are months old, and even then, they don’t go far.

Once the kits are a few months old, the female leopard will start bringing them scraps of meat. As they get older, she will bring them small, live game. This encourages the kits to learn to hunt, and as they get bigger still, they will begin accompanying their mother on hunts.

Leopard kits stay with their mother until they are 12-18 months of age. At that point they start hunting on their own, often targeting weak or older animals that make easier kills. They are fully mature by 2-3 years of age.

There are nine distinct subspecies of leopard. Because of their broad diet and ability to adapt to many different climates, leopards are actually doing better than many other species of big cat. But, many species are listed as threatened, or, in the case of the Amur leopard, critically endangered.

Though widespread, leopards are locally extinct in many places, and their range has decreased by as much as 30% in the past three decades. Leopards are victims of poachers who hunt them for their furs, the illegal wildlife trade, and for use in traditional Chinese medicine. But perhaps the biggest threat to leopard populations is the loss of their prey to the bushmeat trade and habitat fragmentation.

Leopard’s can survive in almost any climate, but one thing they need to thrive is prey. As we’ve learned, they’re not picky, but they do need enough prey to survive on. 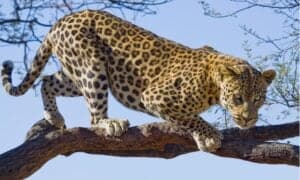