iStock.com/suefeldberg
Share this post on:
More Great Content:
How and Where Do Squirrels Sleep?- Everything…
Ground Squirrel vs Chipmunk: 5 Key Differences
Squirrel Teeth: Everything You Need to Know
Flying Squirrel vs Sugar Glider: What Are…
The 10 Largest Squirrels in the World
Baby Squirrel: 5 Kit Pictures and 5…

The small bushy-tailed squirrel is such an ordinary sight that it’s easy to forget they are extraordinary creatures. They have the amazing ability to leap some four feet in the air, parkour off objects, clamber up trees, and even land on their feet like a cat. Squirrels also have perhaps the most remarkable hoarding ability in the entire animal kingdom. The act of burying food for long-term storage is known as “caching.” This is done to save food for the harsh winter months. People often put up feeders in the backyard to help them prepare for this challenge.

There are dozens of different squirrel species distributed all over the world, including the eastern and western gray squirrels, the Japanese squirrel, the Eurasian red squirrel, and the American red squirrel. The flying squirrels are a closely related group that has skin membranes between the limbs to glide from high atop trees. This article will cover feeding and hoarding behaviors of all types.

What Does the Squirrel Eat?

Squirrels are true omnivores; they eat a combination of various plants and meats. Most of their diet consists of nuts, seeds, fruits, fungi, buds, and even green vegetables. They sometimes supplement this with meat from eggs, insects, young birds, small rodents, amphibians, and even snakes. Females often mate between the spring and fall and must then care for several baby squirrels as well. Baby squirrels are always fed on their mother’s milk for the first six to 10 weeks. After that, the baby squirrels are ready to start foraging their normal omnivore diet.

Flying squirrels, tree squirrels, and even ground squirrels have the amazing ability to hoard their food for the winter. Scatter hoarding, in which squirrels store their food far and wide (as much as seven acres away from their home), is by far the most common strategy, but some species store food in a big pile right next to their sleeping area as well. With their amazing sense of smell, they are particularly fussy about the quality of their food and reject anything that contains little nutritional value or hasn’t yet ripened. Once they’ve found an appropriate candidate, scatter-hoarding squirrels will collect the food in the mouth and find a nice patch of soil to bury it under. They will dig about an inch beneath the surface and then cover the buried food with dirt and soil again. Some studies suggest that squirrels will organize the food by size, type, and even nutritional value.

When winter approaches and other food sources become scarce, the squirrel will slowly draw down its supply of hoarded food. It has a prodigious sense of smell and an amazing memory (its brain size expands during this time) to help it relocate its small underground stores, even if they’re buried under layers of snow. Sometimes, if the squirrel has forgotten where it has buried its food, a seed will germinate into a new plant. This behavior plays an important role in the ecosystem by helping to support the spread of seeds.

With all this free food lying around, you may wonder: do squirrels steal food from each other? The answer to that question is yes. It’s estimated that around 20 to 30% of all squirrels resort to at least some theft. Sometimes, to throw off and confuse a thief, a hoarding squirrel will pretend to bury food but instead keep it. By the time the thief realizes what has happened, the other squirrel is hopefully long gone.

Flying squirrels tend to do most of their hunting and foraging at night, whereas tree or ground squirrels do their foraging in the day, often around dusk and dawn. Ground squirrels are more social and may forage in groups.

Why do squirrels eat nuts?

Nuts seem to provide a perfect mix of proteins and fats to support them during the winter. Despite their highly plant-based diet, they cannot digest some plant products (like cellulose) and rely on nuts for sustenance.

What foods do squirrels love?

Squirrels seem to love nuts and seeds most of all, but as opportunistic omnivores, they will eat almost anything they can find. Some of their favorite nuts include walnuts, hazelnuts, almonds, acorns, pine nuts, and hickory nuts.

What do squirrels eat in the winter?

Since food sources are relatively scarce, both squirrels rely heavily on their buried food stores in the winter. Despite a common misconception, squirrels do not hibernate in the winter, but they do reduce their activity level to conserve energy and rarely move around except to retrieve buried food.

What do squirrels eat in the garden?

Squirrels will sometimes eat a bit of extra fruit or vegetables in the garden, which can be a very annoying behavior. There are many ways to deal with them. You can put up a barrier, cover the ground with mulch or gravel, deploy a motion-activated device to scare them or put up a squirrel feeder to distract them. You could even discourage them by growing plants they don’t like such as mint or mustard. But squirrels are very determined and clever creatures. Sometimes, despite your best strategies, they will get in the garden anyway.

What can I feed my backyard squirrel?

People should strive to feed squirrels in the backyard their natural diet: things like walnuts, hickory nuts, acorns, and beech nuts are all perfectly acceptable. Human foods (even seemingly fine foods like bread) should never be fed to a squirrel; they often don’t contain enough nutritional value and sometimes may be actively harmful to the squirrel. Corn, sunflower seeds, pistachios, and pumpkin seeds are fine in smaller quantities, but they should only supplement the squirrel’s main diet. A simple squirrel feeder placed in the backyard should be enough to attract them when they’re hungry.

Yes, squirrels do sometimes supplement their diet with a bit of extra fruit in the wild. They enjoy things like grapes, apples, and plums.

A Complete List of the Top 10 Foods the Squirrel Eats

Squirrels love all kinds of foods, but it would be difficult to list them all here. These are the general types of foods they enjoy in their diet:

Next Up: Types of Talking Birds 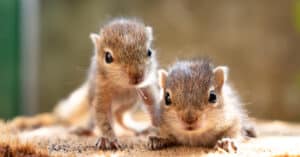