What is a River Basin?

Rivers are complex bodies of flowing water that can travel thousands of miles from their source to their mouth. Not only is it important for us to look at how rivers form, but we have to consider why they form and persist in a given area. Although precipitation and elevation are important and necessary, geological factors matter as well. Today, we’re going to answer a very important question: What is a river basin?

We’ll give you a valuable overview of river basins, show you how they’re formed, and provide a list of the largest river basins in the entire world!

What Are Other Names for a River Basin?

These terms are frequently heard when discussing the river basins. If you hear one of them in place of a drainage basin or river basin, especially a watershed, you’ll know what the other person is talking about.

What is a River Basin?

A river basin is an area of land where precipitation accumulates and flows into a river. These basins are separated from other river basins by geological features such as mountains, hills, and more. The term drainage basin may be applied when precipitation flows into any common outlet including a bay, river, or ocean.

River basins include water from groundwater, lakes, streams, and other sources that gain water from precipitation. A river basin funnels that water in its area toward a single point, a river in this case, by way of multiple streams or lakes that act as tributaries for the main river flow.

When you look at a map of a river basin, you’ll often see the main stem of a river that is fed by several streams. Looking upriver, the tributaries will form a large, branching area.

However, not all the water that falls in a river basin flows out of it. Some water seeps into the ground instead of joining the stream bank, some water evaporates, and people may collect and use the water as well.

Regardless, major river basins may not always drain directly into the ocean. The Ohio River basin, like many others, drains into another river. This basin covers over 204,000 square miles and forms a confluence with the Mississippi River.

The Ohio River basin is its own entity, but it’s considered part of the larger Mississippi River basin when considering the entire system.

River basins are complex systems, but you should have a good idea of what one looks like now.

How Are River Basins Formed?

River basins are formed by erosion from water flow and geological activity. For example, the Alleghenian orogeny was a major geological event, along with others, that led to the creation of the New River, Susquehanna River, and French Broad River and their basins in the United States.

As we have mentioned, river basins are low-lying areas relative to their borders which are usually mountains, hills, or other geological structures that lead to higher ridges surrounding a lower area.

The rise of mountains and subsequent water flows from precipitation create streams, lakes, and creeks that feed into rivers. The cumulative effect of all this water running to a single outlet results in the development of a river basin.

The formation of a river basin is a complex process that results in a well-defined area. However, river basins can meet and also transform over time.

What Are the 5 Largest River Basins in the World?

The Mississippi River Basin (also called the Mississippi-Atchafalaya River Basin) is a massive drainage basin in the United States, measuring 1,151,000 sq. mi. This river almost bisects the entire U.S. Its headwaters are located in Minnesota, and the river mouth is located in the Gulf of Mexico. The river basin drains 32 states!

The Nile is the largest river in the world. The Nile River Basin measures 1,293,000 sq. mi, draining vast amounts of water from Sudan and Egypt as the river flows north to meet the Mediterranean Sea.

The Congo River is the deepest in the world, with a point that is 720ft deep! Moreover, the river basin is 1,550,000 sq. mi. This massive river basin eventually flows west into the Atlantic Ocean after collecting vast amounts of water.

The Amazon River Basin is the largest drainage basin in the world, measuring 2.1 million sq. mi. This basin drains eight countries throughout South America, bringing tributaries to join the Amazon River from hundreds of miles away.

At the start of this article, we asked, what is a river basin? Although these areas may go by many names and have complicated origins, the concept is not that difficult to understand. Low-lying areas bound by mountains or other topographical features receive water, and that water follows the path of least resistance.

As a result, water ends up in large, flowing rivers that end in mouths in the sea or other rivers. You are now poised to discuss this concept with confidence! 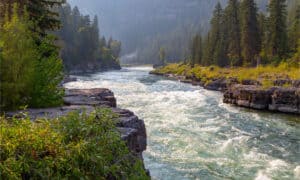 How Wide is the Snake River at Its Widest Point?