What’s The Largest Bay In The World?

All around the world, there are different bodies of water, particularly where seawater is concerned. Although seas and oceans are the best known, there are also bays, gulfs, coves, and straits. Bays are areas with a significant indentation of the coastline, creating a land-locked area of water. Although bays can vary massively in size, some can be much larger than others.  But just how big can they be?  Join us as we discover the largest bay in the world!

What is a Bay?

As we’ve just mentioned, bays are areas of water that are enclosed within an indentation of the shoreline. However, not every indentation can be classed as a bay. Instead, bays are only classed as bays when the area within it is as big as – or bigger – than a semi-circle. So if we draw a line across the mouth of the bay, then we can determine if it is a bay or not. Bays aren’t to be confused with gulfs which usually – although not always – have narrower openings than bays. Bays don’t always have to be formed along a coastline either – they can even be formed along the shoreline of lakes.

How are Bays Formed?

There are several ways that bays can be formed. The most obvious method is erosion. Coastlines are made from many different rock types, with some being much harder than others. The softer rock, mud, and clay wears away quicker than the harder rock from the erosion of the water. This then forms the indentation in the coastline. However, although this is the most obvious, it’s not always the reason that a bay has been formed. Instead, bays can also be formed by rivers and glaciers too. They can even be formed when the ocean simply overflows onto areas of the coastline as well.

Despite this, many bays are actually formed by the tectonic plates. Tectonic plates are the giant plates that make up the earth’s continental and oceanic crust (also known as the lithosphere), and they are made from huge pieces of solid rock. However, they don’t stay still and they continually slide over each other. This is because they sit on top of a layer of molten rock which is also known as the asthenosphere. Convection currents between the two cause the tectonic plates to move.

The tectonic plates can move anything between one and six inches per year and are responsible for the formation of many different land formations. Several mountain ranges and fault lines are caused by these plates, and so are many bays. Bays are formed because of the way the tectonic plates move over millions of years. This causes the continents to constantly drift together only to be pulled apart again and creates new coastlines as it happens.

The Largest Bay in the World

The largest bay in the world is the Bay of Bengal. It occupies a massive 838,613 square miles is 1,000 miles wide and 1,300 miles long. The Bay of Bengal is situated in the northeastern region of the Indian Ocean and is surrounded by India, Bangladesh, Myanmar and the Andaman and Nicobar Islands. The average depth is 8,500 feet, while the deepest part is 15,400 feet.

The Bay of Bengal is formed on top of the massive Indo-Australian plate, which is gradually moving northeast. This plate meets the Burma Microplate, where the Indian part of it is sliding underneath the Burma plate at the Sunda Trench. This movement causes pressure on the fault lines and results in there being a high risk of earthquakes. Earthquakes underneath the water can lead to devastating tsunamis.

There are many rivers that flow into the Bay of Bengal – including the Kaveri, Ganges, Brahmaputra, and the Hooghly. Vast amounts of sediment are deposited into the Bay of Bengal every year from these rivers. The sediment from several of these rivers – particularly the Ganges and Brahmaputra – creates the Bengal Delta. Deltas are triangle-shaped landforms that are created when the sediment is carried out of the mouth of the river into the slower-moving ocean (or other large body of water) which cannot carry it away.

The Bengal Delta is a vast area, covering more than 41,000 square miles. Within this area, there are many lakes, swamps, and floodplains which are some of the most fertile areas and are home to many different species of animals.

Wildlife in the Bay

The Bay of Bengal is an incredibly rich and diverse area that is home to many different animals – including many which are endangered. As there are so many rivers that drain into the bay, the water can be more brackish in some areas. In fact, the Bay of Bengal is well known for having low-salinity levels at the surface. These unique conditions add to the diversity of its marine wildlife.

The Bay of Bengal is home to thousands of different animals – from venomous sea snakes to whales and dolphins – and there are many animals that rely on the bay for their very existence. However, it’s not just the water itself that animals rely on, but the unique habitats formed by the Bengal Delta as well as the beaches and the habitats formed on the shoreline.

Threats to the Bay of Bengal

Unfortunately, like many habitats, the Bay of Bengal is under threat.  In addition to the problem of overfishing threatening many species, many critical habitats within the bay are suffering from loss or damage – such as seagrass meadows, coral reefs, and mangroves. This is due to things such as the construction of jetties and other structures, deforestation, and coral extraction. Within the Bay of Bengal, 26% of its coral reefs are under high threat and 11% under very high threat – with this figure estimated to rise to 23% by 2030.

Additionally, the Bay of Bengal is also threatened by major pollution, which affects its water quality. Pollution can come in many forms. Every year, tonnes of plastic waste enter the Bay of Bengal, which causes serious problems for wildlife. Some animals ingest the plastic, which can cause major health problems, while others can become tangled in it and die.

Other types of pollution include leaking oil and chemical waste into the water from ships. Also, the proximity of fertilizer and chemical factories to the banks of rivers causes pollution in the bay. This is because chemicals that leak into the rivers flow directly out into the Bay of Bengal. Additionally, there is often much sewage waste that flows directly into the bay too. All of these can harm any animal, from sea birds to fish.

Not only that, but natural disasters continue to threaten the Bay of Bengal. The constant threat of hurricanes causes storm surges, flooding, and further coastline erosion. Additionally, the continual movement of the tectonic plates underneath the bay regularly causes earthquakes and means that the layout of the bay is constantly changing. 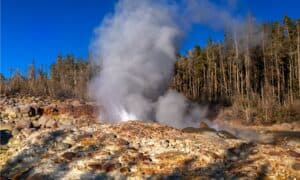