Written by Rebecca
Updated: October 14, 2022
© iStock.com/MirasWonderland
Share this post on:
More Great Content:
What Do Dolphins Eat? 10+ Foods in…
Discover the 10 Largest Dolphins in the…
Dolphin Teeth: Everything You Need to Know
Porpoise vs Dolphin: 5 Ways That These…
How Many Dolphins Are Left In The…
Baby Dolphin: 5 Calf Pictures & 5…

Have you ever watched a video of a group of dolphins swimming next to a boat? If so, you probably saw them leaping, diving, splashing and having a ball.

As you watched this display you may have wondered: Why do dolphins follow boats? Do they do it just for fun or is there another reason?

Discover why dolphins follow boats, how fast they can swim, and how they communicate with one another.

While dolphins are known for their intelligence they also have a strong sense of curiosity. This brings up the first reason why they follow boats. The motion of a boat, its sounds, and the disturbance of the water prompt dolphins to go check out the strange object in their habitat. They approach the boat and swim alongside it to study this fast-moving object and observe the people on board.

Maybe the people are playing loud music that creates vibrations.

These animals are curious and won’t be able to resist checking out the activity. While some other sea creatures would much rather hide or swim away from this commotion, dolphins do the opposite. They like to go investigate!

Not surprisingly, dolphins try to swim as fast as they can. When a dolphin swims in the wake of a boat, its body is carried along on the waves making them move even faster than usual. They burn less energy while achieving a higher speed. In a way, when dolphins follow boats, they are getting a free ride!

Food is another reason they follow boats. Sometimes people on boats are so entertained by these racing dolphins that they throw fish overboard. Once a dolphin gets a reward for following a boat, it is likely to repeat the routine every time it sees large boats, small watercraft, and everything in-between.

In addition, sometimes fish are stirred up to the surface by the wake of a boat. This is an easy meal for a dolphin that’s just out having some fun.

Did you know that dolphins have a competitive side? They do! This brings up another reason why they follow boats. Sometimes dolphins of different species are members of the same pod or group. Spinner dolphins and spotted dolphins have been known to congregate together. If they are following a boat, these different species may try to show off their jumping or diving skills to one another.

Call it a friendly competition. If the people on board a boat are clapping, calling out to them, and giving them lots of attention, the dolphins are likely to put on their best jumping, flipping routine. Dolphins are friendly animals that love attention.

Dolphins follow boats of all sizes. Boats that create a large wake are especially attractive to them because they can get up a lot of speed by following really close. Speedboats make a lot of noise and move through the water quickly, so they’re a favorite with these swift creatures.

A group of dolphins is not going to be as interested in a group of people floating in a canoe, rowboat, or other slow-moving boats. But, their curiosity may get the best of them if they notice the oars dipping in the water. If the people are talking or there is music coming from the watercraft, that is even more reason for these marine mammals to look into the situation.

Are Dolphins Ever Hurt When Following Boats?

Dolphins are sometimes hurt when following boats. They can swim too close to a boat’s propeller and sustain injuries. Also, sometimes dolphins are hit by boats when they cross in front of them. Some of these injuries are life-threatening while others leave scars on this marine mammal.

How Do Dolphins Communicate with Each Other?

Dolphins communicate with each other in lots of ways. They whistle as a way of alerting other dolphins of their presence. Marine biologists believe dolphins can recognize individuals by their unique whistle. Mother dolphins and their calves have been known to whistle to each other when they are separated.

CHAT or cetacean hearing and telemetry is a computer that can broadcast dolphins prerecorded whistles and other dolphin vocals. These were developed and are currently being used by many of the world’s leading dolphin scientists in an attempt to learn how to communicate with dolphins. Furthermore, one theory explaining why dolphins copy each other’s calls are a way to acknowledge another member of their pod.

These creatures make clicking sounds in connection with the process of echolocation. A dolphin makes a clicking noise that bounces off objects and other sea creatures all around it. The sound returns to the dolphin giving it a good indication of what is in its surroundings. A dolphin uses echolocation to look for prey, locate other dolphins and stay alert to predators in the area.

Additionally, dolphins communicate with their bodies as well. When a dolphin slaps its flippers onto the surface of the water it is signaling to others that there is danger in the area. They sometimes slap their tails onto the water when they want to play or are feeling hungry. When two males bump into each other repeatedly it is a sign of aggression.

A male that does this may be defending its young or its mate. One dolphin hitting or bumping its teeth on the back or side of another dolphin is also signaling aggression. It’s not biting the other dolphin; it’s just giving it a warning to keep away.

Leaping into the air is a sign that a dolphin is feeling happy, or they are feeling especially playful.

Spy hopping is another behavior of dolphins. When a dolphin spy hops it pushes itself about halfway up out of the water. It moves its tailfin so it can ‘sit up’ for several seconds.

They spy hop because they want to get into a position where they can see their surroundings better.

A dolphin may do this to look at the people or items on a passing boat. Furthermore, these animals may be seen spy-hopping if they are checking out their surroundings for predators such as great white sharks, bull sharks, or tiger sharks.

How fast can dolphins swim?

Dolphins can swim up to 37mph. But, when traveling along through the ocean they usually go at speeds between 6 and 10mph.

Yes, they are social animals. A group is called a herd or a pod. Some pods only contain three or four dolphins while others contain 30. They travel in pods as a way of protecting themselves against predators and sharing the food source they find. Plus, both adults and juvenile dolphins have a playful nature. So, they like being with each other.

When looking at a pod of dolphins it’s interesting to note that there are smaller groups within the pod. One of those smaller groups known as a subgroup is called a maternity band. This is a cluster of females along with their young calves. Another subgroup is made up of juvenile dolphins. These are young dolphins that have just become independent from their mothers. A bachelor subgroup consists of two or three males that have not yet found a mate.

When are dolphins active?

Dolphins are especially active around sunrise. They also ramp up their activity during mid-morning and mid-afternoon. So, people who are on boats are most likely to see them at these times.

Where are dolphins found?

They live in many places throughout the world. Different species live off the coasts of Australia, North America, South America, Europe, Africa, Asia, and even Antarctica.

With 49 species of dolphin, it’s no wonder they live in so many areas. Some can live in tropical waters while others live in temperate or arctic seas. The humpbacked, bottlenose, and common dolphins live off the coast of South Africa.

A few types are considered Endangered. Some of those are the Amazon River dolphin, South Asian River dolphin, Irrawaddy dolphin, and the Indian Ocean Humpback dolphin. These animals are Endangered as a result of an increase in water pollution. Also, their populations are at risk because they are often killed after becoming caught in commercial fishing nets set out to catch other types of sea life.

On the bright side, many dolphins are listed as Least Concern by the IUCN Red List of Threatened Species like the spinner, striped, common, hourglass, and white-beaked dolphins.

Why Do Elephants Hold Tails When They Walk? 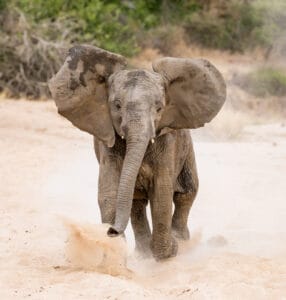