Yellow jackets and paper wasps are incredibly similar wasps, and it’s difficult for the average person to tell them apart.

They’re both yellow and black with thin bodies, slender wings, and similar behaviors. These wasps are both omnivores that hunt insects and eat plant nectar. They’re social, short-lived insects.

However, they do have their differences as well: yellow jackets are more likely to approach people, both to steal food and to sting. Their bodies and coloration are slightly different, if you can get close enough to check! They also nest differently.

In this article, we’ll discuss all there is to know when it comes to the differences between yellow jackets and paper wasps.

When you view photos of these insects side by side, it’s quite easy to tell the difference between them. Unfortunately, wasps don’t tend to sit in place right beside another species—making it more difficult to know what you are dealing with.

The following information can be useful for identification, but never approach a paper wasp or yellow jacket when trying to tell them apart.

Yellow jackets can be quite aggressive, and sometimes sting unprovoked—it’s better to watch out for your own safety first!

The 7 key Differences Between Paper Wasps and Yellow Jackets

Both wasps have a clearly defined head, mesosoma and metosoma. These are the three “sections” of their bodies.

Paper wasps have thin, pointed, translucent wings. The veins on these wasps’ wings are a yellow-orange color.

3.     The Wasps are Slightly Different in Color

Paper wasps dangle their legs in flight. If you can see the insect’s legs, it’s most likely a Paper Wasp!

Yellow jackets tuck their legs up as they fly, so you’re much less likely to spot them.

Yellow jackets have discrete nests underground. If you step on their nest, a yellow jacket—or a swarm if you’re unlucky—may fly out to defend their territory.

Paper wasps nest above ground, typically on structures. Their nests are shaped like honeycombs and made from wood.

6.     Paper Wasps are More Likely to be Found in the Garden

They’re beneficial to the garden too, because they help to kill pests!

Yellow jackets eat a similar diet of insects, nectar, and fruit. They are attracted to meat and sweet smells, and might be found buzzing around your picnic table at the local park.

Like we talked about above, Yellow jackets are prone to territorial behavior. If you’re nearby their nest or happen to step above it, they’re likely to swarm and sting.

Yellow jackets have also been known to sting unprovoked.

Paper wasps can sting, but they aren’t aggressive wasps. They’re most likely to sting when provoked, such as when you mess with their nest.

Are Either Paper Wasps or Yellow Jackets Dangerous to Humans?

Both of these insects can and will sting if threatened. However, only the yellow jacket will sting unprovoked.

Yellow jackets are also territorial and quick to react—you might not see a sting coming if you accidentally walk near their underground nest.

Paper wasps are beneficial insects, especially around the garden. They’re not typically dangerous to humans, and they kill garden pests which keeps plants healthier!

Most people will be just fine after a wasp sting. However, people who are allergic should seek immediate medical attention. You should also visit the doctor if you were stung by multiple wasps at once.

Every person who is stung should wash the wound as soon as possible. Apply ice and take an anti-inflammatory, such as ibuprofen, to reduce swelling.

Watch your sting for signs of infection in the days following the sting.

If you notice excessive redness, swelling, or other symptoms, contact your doctor. 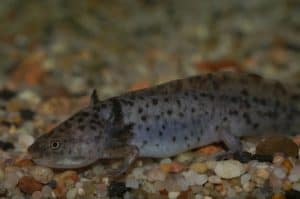 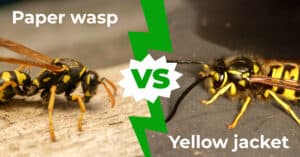