A baby horse, also called a foal, is one of the most adorable sights to see. They are amazing creatures with a host of interesting facts about them. Did you know that foals are born nearly as tall as they will be as adults?

Let’s check out five awesome facts about baby horses and see some adorable foal pictures along the way!

A baby horse is called a foal. Now, it should be noted that baby horses have many names. Some of the most popular are foal, colt (male), filly (female), and yearling. What’s more – baby horses aren’t the only animals that have these names. For example, baby donkeys are also called foals. A baby zebra can also be called a colt. However, filly and yearling are typically only used to describe the horse baby.

#2: Mothers Play a Huge Role in a Foal’s Life

It probably doesn’t come as a surprise that mother horses are extremely important in the lives of their babies. After all, few animals don’t depend on their mothers to some degree as babies. However, foals are especially dependent on their mothers for survival and beyond.

Of course, foals are mammals. This means that as newborns, they must depend on their mother’s milk for nourishment and sustenance so they can grow to be big and strong. Breastmilk is especially important for newborn horses since it provides them with the energy needed to take their first steps.

Father horses do not play a role in their babies’ lives beyond conception. Mother horses singlehandedly raise, protect, and eventually teach babies with no help from the other parent. Mother horses will teach their babies to graze, run, and even how to protect themselves from threats.

Chances are “tall” and “baby” aren’t words that you often use in the same sentence. After all, most babies are known for being tiny, shorter versions of the adults they came from. When it comes to the baby horse, though, short isn’t a word you can use to describe them.

When a horse is born, they are already nearly as tall as it will be as an adult. Yep, that’s right – baby horses are born with 80% to 90% of the height they will have in their legs as adults. Consequently, the tiny horses have a difficult time gaining control over their legs.

For the first thirty minutes to an hour after their birth, foals struggle to stand. Some foals may take longer. However, if a horse takes two hours or longer to stand, they are at risk, since they need to feed soon after birth to survive. For this reason, horse owners will feed babies colostrum if they have not begun to stand at the two-hour mark.

It may take a foal many tries before they successfully stand. Usually, they make their first attempt around 15 minutes after birth. They are no stranger to perseverance, though, and will try over and over again to stand until they eventually get it right. That’s some pretty hard work!

When you think of sleep, you probably imagine laying in a cozy, warm bed. However, for baby horses, this isn’t the case. Did you know that baby horses sleep standing up? They can sleep lying down, as well – which one they choose seems to depend on their mood!

Their sleep position isn’t the only thing that makes them unique. Unlike humans, foals do not sleep for long stretches. Rather than getting in eight to nine hours of sleep in a row, they instead sleep for shorter stretches multiple times throughout the day. Baby foals can be expected to sleep for around half the day until they are around three months old and sleep in around 30-minute increments.

As the baby horse grows up, it will sleep less and less. Foals who are over three months old are more likely to sleep standing up versus their younger counterparts. When the baby grows into an adult, they will only sleep for a total of around three hours in a single day, split up into multiple short naps.

Saliva plays an extremely important role in the survival of a baby horse. The salivary glands behind a horse’s jaw make the substance, which helps foals digest their food. Saliva also helps to buffer acid in a foal’s stomach, which can cause painful ulcers and require surgery.

Saliva is essential to foals. Since it plays such an integral part in their health, foals make a lot of it. Generally, they make around 3 gallons of saliva in a single day. One last fun fact, the first set of horse teeth are called their “milk teeth” which they keep until they’re about two years of age.

What are baby horses called?

How much do baby horses weigh?

Newborn baby horses can weigh anywhere from 35 to 55 pounds on average.

What do baby horses eat?

Baby horses survive on their mother’s milk for around the first year of life. After that, they enjoy an herbivorous diet of grass, fruits, and vegetables.

Where do baby horses live?

Baby horses can be found on every continent except Antarctica. 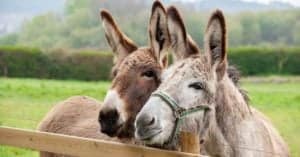 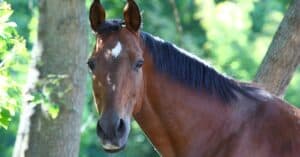