Written by Jennifer Gaeng
Published: November 23, 2022
© Peter Acker/Shutterstock.com
Share this post on:
More Great Content:
Is Hibiscus a Perennial or Annual?
Rose Of Sharon vs. Hardy Hibiscus
7 Extinct Trees
Are Mushrooms & Other Fungus Plants?
The 5 Best Annual Flowers For Zone…
Are There Any Plants That REALLY Keep…

The chili pepper or bell pepper is from a family of flowering plants known as capsicum within the nightshade family Solanaceae. They are indigenous to the Americas. English uses a number of European names, such as jalapeno, pepperoncini, and pepperoncino, to refer to commercially valued capsicum of various kinds, also known as peppers. The plant was given the name “pepper” by Europeans after Christopher Columbus brought it back to the continent. They go by a variety of names based on where they are and what type they are.

The spicier varieties are frequently referred to as chili peppers or just chilis. In Ireland, Malaysia, North America, South Africa, and the United Kingdom, the large, mild type is referred to as bell pepper. In Australia, India, New Zealand, and Singapore, it is sometimes referred to as a sweet pepper or simply as pepper. The plant’s cultivars produce fruits in a range of colors, including chocolate, green, orange, purple, red, white, and yellow. But the confusion is still there. Is a pepper a vegetable or a fruit? The answer might surprise you!

Botanically Speaking, Peppers Are a Fruit – Here’s Why

In terms of botany, peppers are unquestionably fruits. Given how peppers are used in the kitchen, many people might be surprised to learn this. Fruit is often anything that contains the plant’s reproductive seeds, even if it isn’t always sweet and juicy like many other traditional fruits are.

The plant’s flower gives rise to a fruit with at least one seed. Peppers grow from the flowers of plants in the Capsicum genus after the flower has been fertilized. Due to their origination from the pepper plant’s blossom and the presence of microscopic seeds in the center, peppers are classified as fruits in light of the foregoing description. Unlike many other fruits, their seeds are usually removed before eating or cooking.

As many of us know, peppers are widely used as a vegetable ingredient when cooking, despite the fact that they are really berries according to their botanical classification. Let’s look at this more.

Peppers Are a Vegetable in the Culinary World

The pepper is used as a fruit and a vegetable in the realm of cuisine. When eaten raw, peppers are satisfying, energetic, and snappy. We frequently classify peppers as vegetables since we often utilize them to prepare savory dishes like stews and fajitas.

How Peppers Are Used in the Kitchen

Peppers are regularly added to a variety of dishes as a spicy/sweet and crunchy component. To be thorough, it is essential to go over how it is used in various cuisine preparations. For instance, bell pepper bits are widely used in salads and as pizza toppings. There are many different types of stuffed peppers that may be created. Many people use bell peppers that are scooped out or split in half and fill them with rice and/or meat. Dark chocolate is pleasantly surprising to pair with hot chili peppers.

Whole or powdered chili peppers are often used as an ingredient in Cajun, Chinese, Creole, Korean, and Mexican cuisines, as well as most South Asian and Jamaican curries. The powdered version is a key component of many commercially made foods, including jerky, chili con carne, and pepperoni. A variety of powdered peppers are combined to create the widely used spice paprika.

In addition to being prepared in a variety of ways, such as sautéing, roasting, baking and grilling, bell peppers can also be eaten raw in salads and sandwiches. They can even be blended and added to sauces. Chili, dips, jellies, salsa, soups, stews, and many other dishes contain peppers as well. Some peppers are served as appetizers, while others are diced so finely you might not even realize they are peppers!

Peppers have many advantages. They are high in healthy nourishment and low in calories. They may perhaps lessen the chance of developing cataracts and macular degeneration, prevent anemia, guard against some chronic diseases, postpone age-related memory loss, and even lower blood sugar levels!

Is Squash A Fruit Or Vegetable?

Is An Olive A Fruit Or Vegetable?

Is Watermelon A Fruit Or Vegetable? Here’s Why

Is Orange A Fruit Or Vegetable? Here’s Why 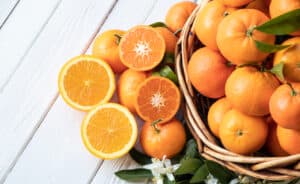