iStock.com/Beth Miller
Share this post on:
More Great Content:
What Do Giraffes Eat? Their Diet Explained
Giraffe Teeth: Everything You Need to Know
Do Animals Cry?
Why Do Giraffes Have Spots?
10 Incredible Giraffe Facts
Giraffe Lifespan: How Long Do Giraffes Live?

Baby giraffes are among the tallest baby animals on the planet. But did you know that they can run ten hours after birth and can moo like a cow? Let’s find out nine awesome giraffe baby facts and look at some pictures of these heart-warming mammals.

#9: Baby Giraffes Use their Bottoms as Pillows

When they lay down to rest, giraffe calves reach their long necks around their body to rest their head on their bottom to sleep. In other words, their bottoms are built-in pillows!

While it’s true that giraffes struggle to walk when they are freshly born, this stage is brief. After about 30 minutes of practice, giraffe calves are able to walk with enough stability to avoid too much stumbling or falling over.

In fact, within 10 hours of being born, giraffe calves can run at full force and keep up with the adults in their families.

If you’ve ever wondered what a baby giraffe sounds like, you might be surprised to learn that their voices are more familiar than you might think. That’s right: giraffe calves can moo like a cow. They usually only use their voices when they are distressed. As giraffes grow up, they will learn new noises that sound more like a whoosh to human ears, eventually communicating at a frequency so low, human ears can’t even hear it!

#6: When Giraffe Babies are Born, They Fall Six Feet!

You probably already know that adult giraffes are seriously tall. They are so tall, in fact, that they are the tallest animal in the world! When adult giraffes give birth, they do so standing up. This means that giraffe calves face up to a six-foot fall from their mothers to the ground when they are born. Miraculously, this fall rarely injures the babies, and instead, the fall breaks their umbilical cords and frees them from their natal sac, which allows them to take their first breath.

Baby giraffes are baby giants! When they are born, they stand at around six feet tall and weigh about 220 pounds! While they can walk approximately 30 minutes after they are born, it takes them several hours to start standing up straight. They are born with their eyes open, and their tiny horns, called ossicones, are flat against their head for a few hours before perking up.

#4: Giraffe Babies Get Their Spot Patterns From Their Mothers

Recent research shows that a baby giraffe’s spot pattern is similar to its mother’s. The spot pattern that a giraffe calf inherits has a direct effect on its survival since some spot patterns provide better camouflage, temperature regulation, and identification by older giraffes in their family. Giraffes’ spot patterns don’t change as they get older.

#2: Giraffes Double Their Height in The First Year

Imagine being double as tall next year than you are right now! For giraffe calves, this is a reality. They are born at about six feet tall and over the course of their first year of life, grow to be around 12 feet tall. Most of this height is in their neck. Growing taller rapidly allows giraffe calves to forage for their own food sooner, which increases their chances for survival and allows them to venture off on their own sooner.

#1: Giraffes Leave Their Mothers When They Are Two Years Old!

Even though two might sound young to humans, to giraffes, it’s perfectly normal to leave their mothers at two years old. At this time, giraffes leave their herd, called a tower, to fend for themselves. However, the bond that mother and baby giraffes form is strong.

Even after baby giraffes leave their tower, they are known for coming back and traveling with their mothers for days or even weeks at a time.

How tall are baby giraffes?

Baby giraffes are around six feet tall when they are born – that’s a tall baby!

What do baby giraffes eat?

Baby giraffes exclusively drink their mother’s milk for their first four to six months of life. After that, they eat foliage close to the ground like baby shoots and young acacia leaves.

What is a baby giraffe called?

Where do baby giraffes live?

Baby giraffes live on the savannahs in Africa with their families, which usually consist of multiple female giraffes and one male who travels with the tower for protection.

How long is the gestation period for a baby giraffe?

Mother giraffes are pregnant with their babies for 15 months before the baby is born. 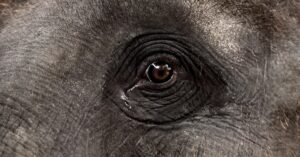