Click through all of our Giraffe images in the gallery. 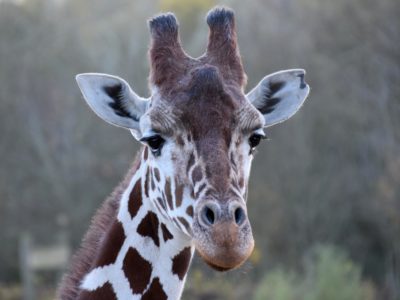 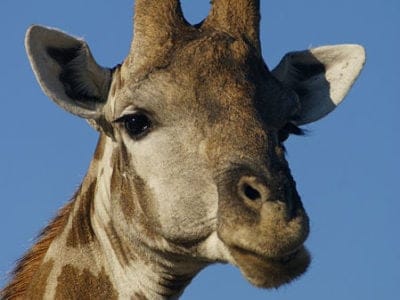 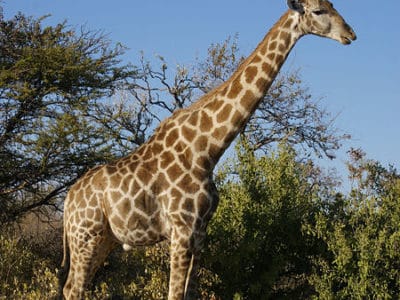 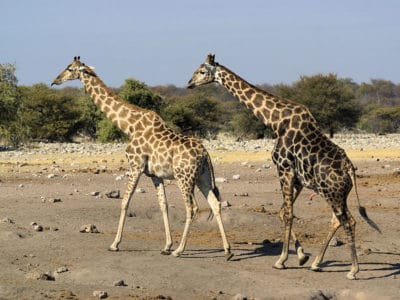 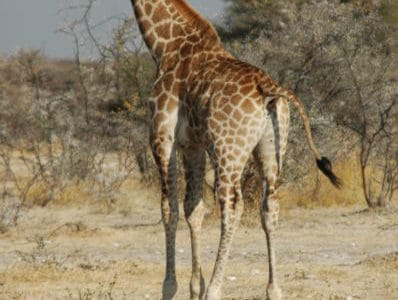 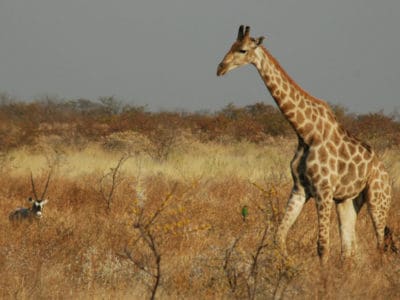 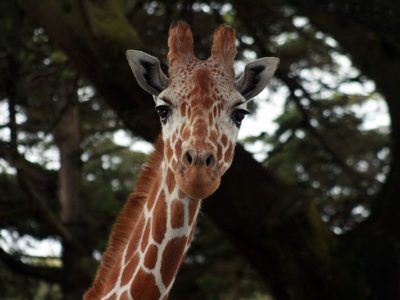 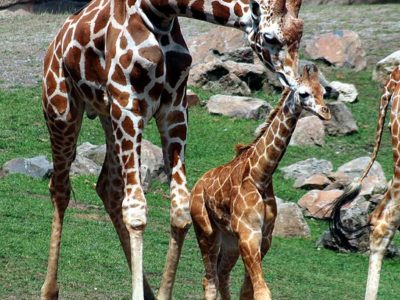 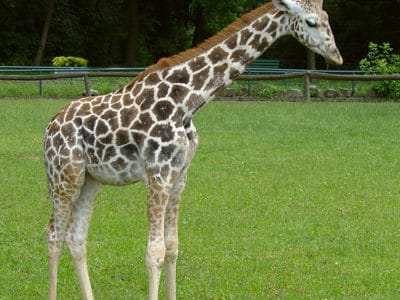 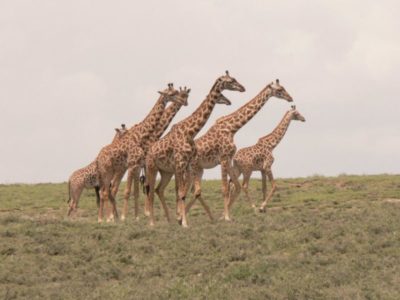 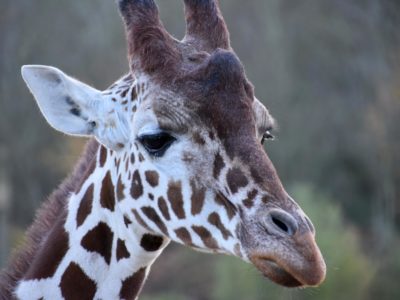 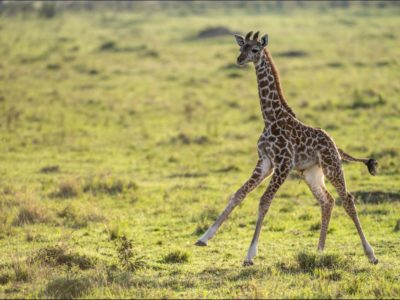 View all of the Giraffe images!

The Giraffe is a long-necked, hoofed mammal that is natively found grazing in the open woodlands of sub-Saharan Africa. The Giraffe is the tallest living animal on land and despite its height is mostly closely related to the much smaller and solitary Okapi, that is found elusively dwelling in the dense tropical forests. There are nine recognised sub-species of Giraffe that are found in differing geographic locations and vary somewhat in the colour and pattern of their spot-like markings. Although the Giraffe would have once been found across sub-Saharan Africa and even in parts of North Africa, today they are extinct from much of their historically vast natural range with only small, isolated populations remaining in a handful of regions in central Africa. Further south however, Giraffe populations are considered to be stable and are even growing in some areas due to an increase in demand for them on private ranches.

The Giraffe is an animal with an enormously long neck which allows it to exploit the leaves and vegetation that are too high up for other animals to find. Despite their length, the neck of the Giraffe actually contains the same number of bones as numerous other hoofed mammals but they are simply longer in shape. The Giraffe’s elongated neck leads into a short body, with long and thin, straight legs and a long tail that is tipped with a black tuft that helps to keep flies away. The Giraffe tends to be white in colour with brown or reddish markings that cover its body (with the exception of their white lower legs). The markings of each Giraffe are not only unique to that individual but they also vary greatly between the different Giraffe species in size, colour and the amount of white that surrounds them. All Giraffes though have large eyes that along with their height give them excellent vision, and small horn-like ossicones on the top of their heads.

As a ruminant, giraffes are an animal with multiple stomachs. They’ll often eat north of 75 pounds of leafs per day, with their four stomachs each handling different functions to aid in extremely efficient digestion of nutrients.

Previously found even in North Africa, today the remaining Giraffe populations are restricted to parts of sub-Saharan Africa with the largest concentrations being found in National Parks. Giraffes are animals that inhabit open woodlands and savannah where using their height they are able to see for great distances around them to watch out for approaching danger. The nine different Giraffe species are found in varying countries on the continent, each exploiting their local ecological niche. Due to the fact that Giraffes feed on vegetation that is high in the trees but also too woody for the mouths of smaller herbivores, they are also able to remain in areas where domestic grazing has obliterated the plant species close to the ground, forcing the species that feed on them to move on. Giraffes throughout Africa though have been drastically affected by the loss of vast regions of their natural habitats.

The large size of the Giraffe means that it must spend a great deal of time eating which it tends to do the most during the more tolerable heat of the morning and evening. During the hot midday sun, Giraffes rest in more shaded regions where they (like a number of their relatives) regurgitate their food known as cud, before then consuming it again. Small herds comprised of a number of females and their young spend both the day and night together to protect their offspring from predators, but male Giraffes are much more solitary often roaming over large areas in search of a fertile female. If however they come into contact with a rival male, the two will begin to bump heads and interlock their necks as a way of establishing a dominance hierarchy, with the winner earning the right to mate with the local females.

Giraffes only sleep one or two hours per day. More impressive is that they have adaptations that allow them to sleep in power naps while standing up.

Giraffes breed year round and after finding a female to mate with, the male Giraffe will resume his solitary ways. After a gestation period that lasts for 15 months, the female Giraffe gives birth to a single infant (twins are rare) that already stands at two meters tall and has its unique markings. Giraffe calves look the same as adult Giraffes but simply become even bigger and more elongated as the grow and mature. After birth, the female Giraffe will often keep her calf away from the rest of the herd for an average of 15 days and the calf will then be weaned when it is just over a year old. Male Giraffes are able to breed a year later than females, but are sometimes not successful until they are nearly eight years old. Although both male and female young Giraffes will join small groups males tend to become more solitary with age, where females remain together but will often wander between different herds.

The Giraffe is a herbivorous animal that has evolved to be the height that it is so that it has less competition for food on the higher branches of the canopy. Giraffes are known to eat up to 60 different species of plant throughout the year and do so by grabbing onto branches with their long, black tongue (that can grow up to 18 inches long) and using their tough prehensile lips and flattened, grooved teeth are able to strip the leaves off the branches. Giraffes most commonly eat from acacia trees but also browse for wild apricots, flowers, fruits and buds along with eating seeds and fresh grass just after the rains. Giraffes get 70% of their moisture from their food so need to drink very little but when they do come across clean water, they must splay their front legs (which are longer than the back) in order to get their head close enough to the ground to drink. Giraffes can survive for up to three weeks without drinking water. Learn more about the toughest animals in the world here.

Despite being the tallest land animal in the world, the Giraffe is actually preyed upon by a number of large carnivores that co-inhabit the dry savannah. Lions are the primary predators of the Giraffe. Lions use the strength of the whole pride to catch their victim, but giraffes are also preyed upon by Leopards and Hyenas. Giraffes rely on the vast open plains so that they can have the best view possible of their surroundings but if a predators does get too close, Giraffes kick their attacker with their large, heavy feet to defend themselves. Young calves however, are much more vulnerable and rely on the protection of their mother and the herd. Sadly though, around 50% of young Giraffes do not make it past the age of 6 months due to predation. All Giraffes are also threatened by hunting from Humans with populations having completely disappeared from certain areas.

Even though Giraffes feed higher than any other animal, males actually still feed at higher levels than females to avoid competing with each other for food. They stretch their necks higher up which also possibly gives them an advantage when watching out for predators. If danger is sighted, Giraffes will instantly sprint away and can run at speeds of more than 30mph for short periods of time. Interestingly enough though they are not actually able to trot as their body shape and size means they trip over and so must instantly go from walk to run. Due to the elongated height of the Giraffe and its large sensitive eyes, they are able to see for some considerable distance and have the greatest range of vision of any animal on land.

The Giraffe today is seen as a major tourist attraction and is one of many people’s must-see species when the go on safari. However, Giraffes have been hunted by people and also have been severely affected by their encroachment on their natural habitats which has led to vast population declines across Africa and even the extinction of the species in some countries. In southern parts of Africa though, Giraffe populations are even growing in some areas as they are becoming more and more popular as game on private ranches. However, due to hunting and habitat loss Giraffes have lost half of their once vast natural range with the majority of wild individuals found in a number of Africa’s large national parks.

Today, the Giraffe is listed by the IUCN as an animal that is of Least Concern of becoming extinct in its natural environment in the near future due to the fact that the majority of Giraffe populations are currently stable and are in fact increasing in some areas. They are however, still affected by both hunting and habitat loss with populations further north becoming sparser and more isolated from one another. A few of the nine Giraffe species are now listed as either Threatened or Endangered.

Are Giraffes herbivores, carnivores, or omnivores?

What Kingdom do Giraffes belong to?

Giraffes belong to the Kingdom Animalia.

What phylum do Giraffes belong to?

Giraffes belong to the phylum Chordata.

What class do Giraffes belong to?

Giraffes belong to the class Mammalia.

What family do Giraffes belong to?

Giraffes belong to the family Giraffidae.

What order do Giraffes belong to?

Giraffes belong to the order Artiodactyla.

What genus do Giraffes belong to?

Giraffes belong to the genus Giraffa.

What type of covering do Giraffes have?

Giraffes are covered in Hair.

Where do Giraffes live?

In what type of habitat do Giraffes live?

What are some predators of Giraffes?

Predators of Giraffes include lions, leopards, and hyenas.

What is the average litter size for a Giraffe?

The average litter size for a Giraffe is 1.

What is an interesting fact about Giraffes?

Giraffes have long, black tongues that can grow up to 18 inches long!

What is the scientific name for the Giraffe?

The scientific name for the Giraffe is Giraffa camelopardalis.

What is the lifespan of a Giraffe?

What is a baby Giraffe called?

A baby Giraffe is called a calf.

How many species of Giraffe are there?

There are 9 species of Giraffe.

What is the biggest threat to the Giraffe?

The biggest threats to Giraffes are hunting and habitat loss.

How fast is a Giraffe?

A Giraffe can travel at speeds of up to 30 miles per hour.