The 10 Most Stunning Apex Predators from Around the World

iStock.com/Ondrej Prosicky
Share this post on:
More Great Content:
Watch an Eagle Attack A Trespassing RC…
Discover the One Place on Earth that…
What Kills Bed Bugs Instantly?
Watch a Fierce Grizzly Battle Over Whale…
Is Mandevilla A Perennial Or Annual?
Are Brown Recluses in California?

Apex predators dominate the ecological niche they’re in and are important for keeping prey populations down.

Many have bright, colorful, or striking markings as a warning to prey animals of their danger. These markings also make them very beautiful, so determining the most stunning boils down to looking at the top apex predators of each type of animal.

Apex predators are famous for being successful hunters. They are fearsome because they are dangerous and have few to no predators.

However, an apex predator can also look incredible while being at the top of the food chain. Below is a list of the world’s most stunning apex predators:

Pythons, like constrictors, are primitive and don’t kill as venomous snakes do with biting and releasing venom. Instead, they use constriction, an ancient prey-killing method.

They are able to consume animals several times their size, including alligators and deer.

The Burmese python is the most beautiful of predatory snakes with its exotic coloring. It is also a testament to the possibility of invasive species becoming top apex predators, as is the case with escaped Burmese pythons in the Florida Everglades.

On the other hand, their population is decreasing in their native habitat of Southeast Asia.

Big cats are top apex predators due to their large size, sharp teeth and claws, powerful bodies, and hunting skills.

When comparing the tiger against its cousin the lion, the tiger is heavier, larger, and longer than the king of the jungle. It’s also the biggest cat in the world and popular due to its exotic stripes and striking colors which enable it to camouflage itself.

When tigers hunt, they use their senses of sight and hearing to locate prey, then stalk the prey from behind in an effort to get as close as possible.

When they pounce, they will bite the animal’s neck or throat. Animals they prefer to eat weigh up to 45 pounds or more like deer, horses, cows, pigs, goats, moose, elephant and rhino calves, and tapirs.

A mysterious big cat, it’s a solitary creature that meets only during mating season.

While there were an original 9 subspecies of tigers in the world, as of 2022 only 6 of these subspecies remain endangered.

The largest subspecies, the Siberian tiger, can weigh 660 pounds and be 11 feet long.

The eagle is a national symbol for several countries, popular for its appearance representing beauty, freedom, and dignity.

As one of the top apex predators, the bald eagle is the largest raptor in North America. Conservation efforts brought it back from extinction by pesticides and hunting, with its population increasing and listed as Least Concern.

Living near bodies of water, it hunts fish, water birds, and small mammals, but also eats carrion and steals other birds’ prey.

It hunts by observing prey from a perch or the sky and swooping down to grab the prey with its razor-sharp talons.

The adorable mascot of Coca-Cola is nonetheless one of the top apex predators. Its white fur enables it to camouflage itself while it waits by a crack in the ice for fish, seals, and other small mammals. It also scavenges carcasses.

The largest bear species and apex predator in the world, the polar bear can grow to 10 feet in length and weigh up to 1500 pounds.

It lives in the arctic regions of Norway, Greenland, Canada, Alaska, and Russia, but is listed as Vulnerable due to habitat loss, hunting, pollution, and severe weather.

Although the killer whale (also known by its more benign-sounding name the orca) looks cute and magnificent to watch while it leaps in the water, don’t be fooled: It’s very deadly, attacking sharks, whales, and other large sea creatures and eating 100 pounds a day.

Belonging to the oceanic dolphin family, it’s a toothed whale that is present in all oceans, but data on its populations is lacking.

It’s the fastest sea creature in the world with the ability to sail 30 miles per hour. Size-wise, it can grow up to 30 feet long and weigh up to 12,000 pounds or 6 tons.

It has a long lifespan too, with males living up to 60 years and females up to 80. Interestingly, its brain is 5 times larger than the human brain but is structured like one, making it one of the most intelligent sea creatures.

At the top of the apex predator list for insects, the praying mantis is the most stunning. Not only was it named for looking like it’s praying, but it’s also brutal and can easily take down beetles, crickets, flies, bees, wasps, and even lizards and frogs with its spiny forelegs, lightning-fast speed, and voracious appetite.

Most praying mantis species are originally from the tropics and the mantids most often seen in the U.S. are exotic species. They have amazing vision and can turn their heads a full 180 degrees and they are also closely related to cockroaches and termites.

Although praying mantis species are normally harmless to humans; females have been known to consume their male counterparty. She may even decapitate her mate before they even engage in mating.

Although spiders are its main predator, the larger the mantis is, the most likely it is to escape their webs. And it looks like it’s doing just fine, with its population listed as Least Concern.

Spiders in general are important apex predators which keep down pests. The black widow is the most stunning, featuring a black, bulbous body with a bright red hourglass-shaped mark on its abdomen.

The black widow spider has a deceptive size of 1.5 inches, and its venom is 15 times deadlier than rattlesnake venom.

This makes it deadly for immunocompromised people, the elderly and small children, as well as animals smaller than humans.

Achy muscles and nausea are the first symptoms, while the paralysis of the diaphragm causes respiratory difficulty. Another reason for its being one of the top apex predators is the fact that females sometimes kill and eat males after mating.

Read here to learn more about the black widow spider.

The saltwater crocodile is the largest crocodile and the largest living reptile around and is listed as Least Concern on the IUCN Red List. It also likely to win in a fight against its cousin, the alligator.

Although females are much smaller, males grow up to 23 feet in length and weigh up to 2,200 pounds. The average adult crocodile’s teeth number 66 and have the greatest bite pressure of all animals, while its average lifespan is 70 years and over.

As a top apex predator, it attacks prey including crabs, birds, turtles, boar, monkeys, and buffalos, hunting by stealth in the water with only its eyes and nostrils showing.

It lives near the coasts of countries ranging from northern Australia, New Guinea, and Indonesia to the Philippines, Borneo, Sri Lanka, India, and Southeast Asia.

The Komodo dragon is the largest living lizard on earth, measuring up to 10 feet in length and 200 to 360 pounds in weight. Boasting powerful legs and sharp teeth, it was a common belief for a long time that it killed with bacteria-filled saliva in its bite, but new research shows they actually kill with venom.

Native to Indonesia, it eats carrion but attacks large prey. Once it bites its prey and injects the venom, it pursues it until it succumbs to the effects.

It can eat 80 percent of its body weight in just a single feeding. While not necessarily fatal for humans, its bite can cause swelling, hypothermia, blood clotting, and paralysis.

Frequent fatalities from their attacks in their native Sunda islands of Indonesia inspired a “kill on sight” practice which made it vulnerable, and it has since been banned from being hunted.

The top apex predator in the world is the wolf, which was an easy choice. Hypnotic eyes, gorgeous fur, and a haunting howl make it jaw-droppingly astonishing for anyone fortunate enough to catch a glimpse of one.

This pack animal lives and hunts in a pack of anywhere from 2 to 15 wolves or more members led by an alpha male and alpha female, making it especially powerful in numbers.

The population of the type species the grey wolf is stable and listed as Least Concern.

Summary of the 10 Most Stunning Apex Predators

Here is a review of the apex predators that we have found to be the most stunning in the world: 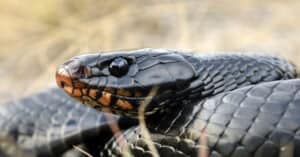 Eastern Indigo snakes regularly chase down and eat rattlesnakes and may be immune to their venom. 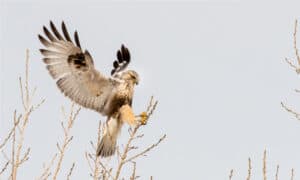