Layne VR/Shutterstock.com
Share this post on:
More Great Content:
See 76 Beavers Fly Into Idaho Wilderness…
Muskrat vs Beaver: 6 Key Differences Explained
Beaver Teeth: Everything You Need To Know
What Do Beavers Eat?
Beavers in Texas: Where Do They Live?
Woodchuck vs Beaver: 5 Key Differences

The beaver is a rodent from the genus Castor and the family Castoridae. Measuring about 31-41 inches long and 35-60 lbs in weight, it is the second largest rodent in the world, which means it would have the first spot if capybaras didn’t exist. It possesses some impressive abilities, one of which is its ability to create a dam out of sticks and leaves. These impressive traits and abilities are why it is considered one of the most special animals on the planet. As is the case with most animals and humans, beavers also poop. In this article, we will be examining beaver scat in a concise yet considerably detailed manner. Let’s ride.

Beaver poop has a round or cylindrical shape and it is usually about 1.5-2.5 inches long and ¾ to 1 inch in diameter. Their scat looks like a mix of sawdust and woodchips in a snowball shape. Also, beaver scat is usually hard and dry, although it can be broken apart with a stick. Their poop typically has a sawdust appearance that distinguishes it from other animals’ poop.

Many times, you can trace the cause of the appearance of a person or animal’s poop to what they most recently ate. For instance, the poop of carnivorous big cats always has hair and bone fragments, which suggests they most recently fed on a fleshy animal. In the same vein, beaver poop has a sawdust-like appearance because part of their diet is shrubs and tree bark.

How Do Beavers Poop?

Where Do Beavers Poop?

We mentioned earlier that beavers often poop by lowering their butts into water. This is because their preferred pooping location is in the water. They also sometimes poop in their underground burrows. Some experts believe they poop in water because they do not want to have to crawl through other beavers’ droppings on land. This is an actual concern for them because beavers in a particular area often use the same feeding pathways and they’d rather not make it all poopy. They’d rather just leave it around the same ponds they inhabit and while it may seem gross and illogical to humans, it makes total sense to them, especially since they are coprophagous animals.

Just as you might have guessed from our discussion so far, beavers have a strictly herbivorous diet. This means you probably will never catch them feeding on other animals, under any circumstances. They prefer leaves, grasses, and herbs during the summer and spring months and they typically switch to wooded plants and bark during the fall and winter months. Their diet includes leaves, woody stems, aquatic plants, twigs, shrubs, grasses, and crops. They have an interesting penchant for inner bark from trees including aspen, willow, cottonwood, maple, and poplar. That pretty much explains why their poop has a sawdust-like appearance. Some have even wondered in jest if beaver poop can start a fire and as interesting as the question is, the answer is a definite no.

Not only do they eat soft woody plants and inner bark from these trees, but they also deploy the hardwood from them in their various construction endeavors. They reportedly cut down as many as 200 trees every year, most of which they use to build lodges for food storage and as protection against predators.

It is important to note that beavers cannot and do not eat meat, fish, or leftovers and they certainly do not rummage through trash cans. They also do not eat stuff from alder and oak trees as they consider these trees strictly for construction purposes.

Do Beavers Eat Their Poop?

As we mentioned before, beavers are coprophagous animals, which means they often eat their feces. They are hindgut fermenters and in the process of their digestion, some nutrients often slip through as part of their fecal waste. By eating their poop, beavers get to regain these nutrients. This is a healthy practice for them. Oftentimes, they eat the soft droppings and leave the hard ones in the water to disintegrate.

Like some other animals, beavers often deploy scent markers but not with their poop or urine. Mature beavers often eject a yellowish fluid known as castoreum through their castor sac. They typically create a scent mound at the end of the water and deposit the substance on it as a form of scent mark. This is their way of protecting their territories and may be considered a note of warning addressed to other beavers to keep off.

Interestingly, the scent from this castoreum is nothing putrid; in fact, it smells very much like the vanilla flavor. Little wonder, castoreum has been used consistently as a major ingredient in vanilla flavoring for the past eight decades. We are talking cakes, cookies, lotions, candles, food, and even perfumes. Pretty intriguing, right?

Handling or coming in contact with beaver poop can be really dangerous to humans as they carry a number of diseases. The most common disease present in beaver poop is the Giardiasis infection, also known as beaver fever. Infected beavers spread this disease to humans through the droppings they leave in streams, lakes, and water reservoirs. Symptoms include slight fever, fatigue, nausea, severe discomfort in the abdomen as well as diarrhea, although about 10% of infected people show no symptoms.

One major way to avoid contracting beaver fever from the beaver’s poop is by not drinking water from public streams and lakes. Also, if for some reason, you have to handle beaver scat, you should wash your hands thoroughly after. 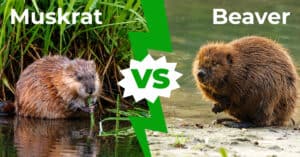