Click through all of our Capybara images in the gallery. 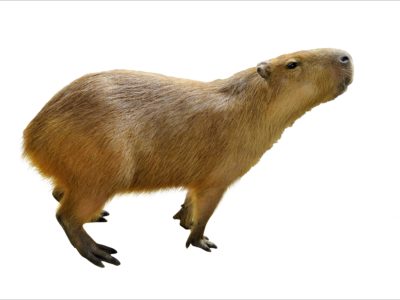 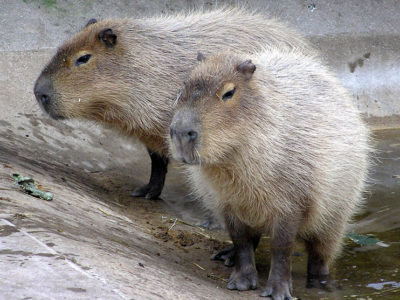 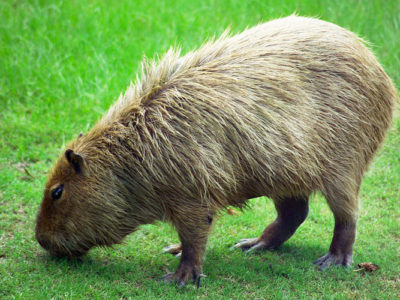 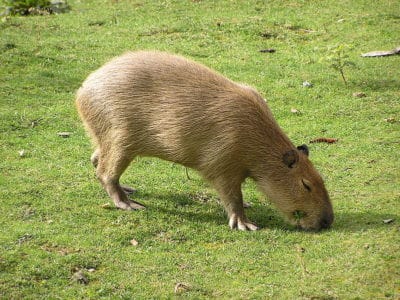 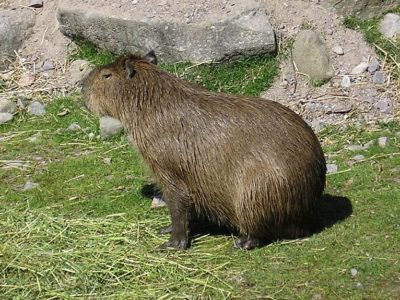 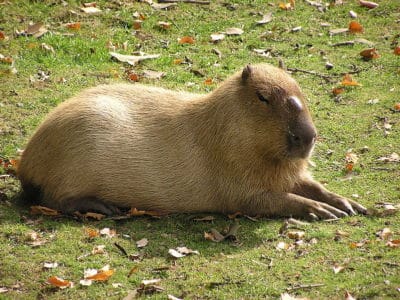 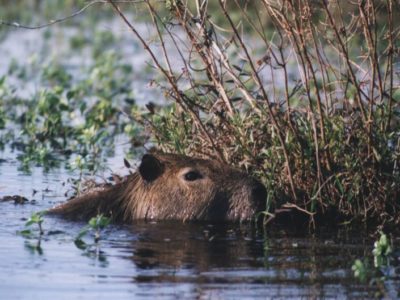 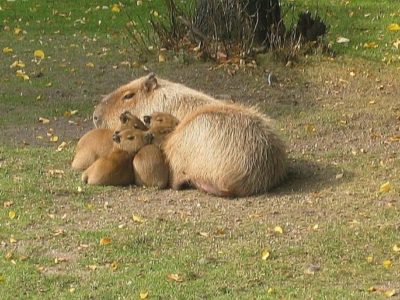 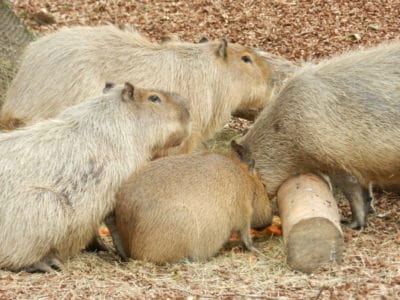 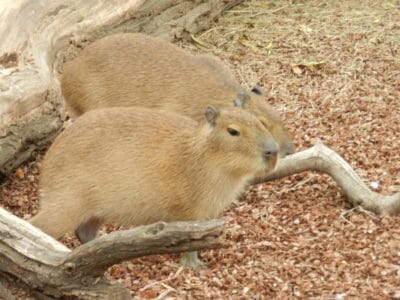 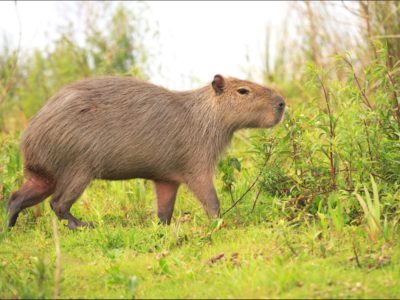 View all of the Capybara images!

The Capybara is a large, semi-aquatic rodent that is found inhabiting the water-logged regions of Central and South America. Closely related to other South American rodents such as Chinchillas and Guinea Pigs, the Capybara is the largest rodent in the world weighing up to 75kg and measuring nearly 1.4 meters long. Despite their enormous size though, Capybaras are animals that have adapted well to life in the water and have a number of distinctive characteristics that aid their amphibious lifestyle, including the webbed skin between their toes which is particularly helpful when swimming. Interestingly enough, the common name of the Capybara is thought to mean “Master of the Grasses”, whilst its scientific name comes from the Greek word for water hog.

The Capybara is a heavy, stocky-looking animal with a short head and muzzle in comparison to its body and hardly any tail at all. They have short but sturdy limbs and hoof-like claws on their toes which along with the webbing, helps the Capybara both when negotiating the slippery banks and with swimming and also prevents the Capybara from sinking too deeply into the surrounding mud. Their coarse, short fur is pale to dark brown in colour with varying tinges of yellow, red and grey and is perfectly designed to dry out quickly once the Capybara is back on land. One of the Capybara’s most distinctive features is the fact that their eyes, ears and nostrils are all positioned on top of its head meaning that they still have excellent sight, sound and smell whilst in the water. The placement of these features also means that when threatened, the Capybara can retreat into the water only leaving these parts of its body exposed to hide from potential predators.

The Capybara is an animal that is found throughout a variety of habitats in Central and South America providing that there is a constant source of standing freshwater. They are found in Panama, Colombia, Venezuela and Peru, down through Brazil and Paraguay and into northern Argentina and Uruguay where they are most commonly found in swamps, marshes, rivers and lakes. The Capybara can be found inhabiting grassy plains and even in rainforests where they occupy territories in herds, with these areas reported to be adequate territories year round even with the differing seasons. During the dry season the Capybara must have water and areas where they are able to feed (often small sandbars in the water), but in the wet season when the area floods they must still be able to graze which they often do on the grassy banks.

The Capybara is a very sociable animal that tends to inhabit densely vegetated areas close to water in herds of around 20 individuals, which are usually made up of a dominant male with a number of females and their young. Capybara herds occupy very stable home ranges that are known to vary in size depending on the size of the herd to ensure that there is enough food, and although small parts of their territory may overlap those of another herd, they will tend chase intruders off their patch. The Capybara actually sleeps very little, preferring instead to doze whilst resting during the morning in thickets on the banks, or wallowing in the mud and water when cooling down in the heat of the midday sun. They begin to emerge onto land in the early evening when they graze on grasses and aquatic plants which the Capybara will continue to do throughout most of the night.

In a Capybara herd it is only the dominant male that has the breeding rights to the females, and although it can occur all year round depending on the conditions, the breeding season tends to be during the rains in April and May. After a gestation period that lasts for around five months, the female Capybara gives birth to between 1 and 8 pups on land. Capybara young are very well developed at birth and not only have all their fur and can see, but are also able to run, swim and dive within hours of birth. The female rejoins the main group within hours with her newborn offspring, which begin to eat grass after about a week (although they will continue to suckle milk from their mother until they are around four months old). The Capybara tends to live for up to 10 years in the wild and slightly longer when kept in captivity.

The Capybara is a herbivorous animal that only eats plant matter in order to acquire all of the nutrients it needs. The diet of the Capybara is mainly made up of grasses and aquatic plants, along with fruits and berries and the occasional munch on soft tree bark. Despite spending a number of hours during the night grazing, the Capybara is quite fussy with around 75% of their diet involving between three and six different species of plant. Like all other species of rodent, their two front teeth grow continuously throughout their life meaning that they must gnaw and chew their food to grind them down which they do in a back and forth motion rather than from side to side. They are also known to both regurgitate their food in order to chew it again (much like a Cow) and also eat their own droppings which help to break down the cellulose in the grass, along with aiding their digestive system in general.

Despite the large size and secretive aquatic nature of this large rodent, their slow and gentle disposition makes them a rewarding meal for numerous hungry predators throughout their natural range. Wildcats including Jaguars, Pumas and Ocelots are the primary predators of the Capybara along with Caimans and Eagles that can hunt the younger ones from the sky above. The Capybara is also one of the best sources of food for the world’s heaviest snake, the Anaconda, along with other species of large snake. The Capybara is also hunted by Humans in parts of its natural range for both its meat and the hide which is prized amongst some. Although the global Capybara population is not considered to be under threat, numbers in these areas have declined. Habitat loss also affects Capybara populations through Central and South America as they are specifically adapted to life in their unique watery wilderness.

Capybara never stray far from water as when one senses danger it gives a short bark that encourages the herd to quickly scuttle into the water to hide. They are so well adapted to going unseen in the water that the Capybara is actually able to hold its breath for up to five minutes after diving in. Although Capybara herds tend to average between 10 and 30 individuals, larger groups are not uncommon with some numbering up to 100 members in home ranges generally larger than those of smaller groups. Capybara are known to communicate between one another using both scent (which is secreted by their glands) and sound, and have a number of different vocalisations including whistles, barks, grunts and squeals.

Due to their slow and generally gentle nature, Humans have lived alongside Capybara for hundreds of years peacefully. Learn about the most friendly wild animals in the world here. However, they may not be aggressive animals but are often killed in certain areas for their meat and skin which has led to population declines in these regions. The Capybara has also been affected by Human activity in their native regions in general including both growing Human settlements and land clearance for agriculture. It is in these areas particularly that when there is not an adequate supply of food available, some Capybara have been known to enter crop fields where they can cause a great deal of damage and can be seen as pests.

Today, the Capybara population throughout Central and South America remains fairly stable and it is because they are still common in much of their natural range, that the Capybara is listed as being of Least Concern from becoming extinct in their natural environments in the near future by the IUCN Red List. Population numbers in certain areas however, have declined due to hunting and others are affected by loss of their natural habitat both from deforestation and increasing pollution levels in the water.

Are Capybaras herbivores, carnivores, or omnivores?

What Kingdom do Capybaras belong to?

Capybaras belong to the Kingdom Animalia.

What phylum do Capybaras belong to?

Capybaras belong to the phylum Chordata.

What class do Capybaras belong to?

Capybaras belong to the class Mammalia.

What family do Capybaras belong to?

Capybaras belong to the family Caviidae.

What order do Capybaras belong to?

Capybaras belong to the order Rodentia.

What genus do Capybaras belong to?

Capybaras belong to the genus Hydrochoerus.

What type of covering do Capybaras have?

Capybaras are covered in Fur.

Where do Capybaras live?

In what type of habitat do Capybaras live?

What are some predators of Capybaras?

Predators of Capybaras include jaguars, caimans, and harpy eagles.

What is the average litter size for a Capybara?

The average litter size for a Capybara is 5.

What is an interesting fact about Capybaras?

Capybaras are excellent at both diving and swimming.

What is the scientific name for the Capybara?

The scientific name for the Capybara is Hydrochoerus hydrochaeris.

What is the lifespan of a Capybara?

Capybaras can live for 8 to 10 years.

How many species of Capybara are there?

There are 2 species of Capybara.

What is the biggest threat to the Capybara?

The biggest threats to the Capybara are hunting and habitat loss.

What is another name for the Capybara?

The Capybara is also called the water hog.

How fast is a Capybara?

A Capybara can travel at speeds of up to 22 miles per hour.