David Kay/Shutterstock.com
Share this post on:
More Great Content:
What’s a Baby Goat Called + 4…
Discover the 10 Largest Goats in the…
Goat Lifespan: How Long Do Goats Live?
What Do Mountain Goats Eat? Their Diet…
Do Miniature Goats Make Good Pets? Two…
What do Goats Eat? 20+ Foods in…

Goats (Capra hircus) have been domesticated for over 10,000 years. For some, they’re meat. For others, they’re milk producers. And for still others, they serve as adorable pets, or petting zoo staples. Goats have incredible variety, and can weigh anywhere from 50 pounds for the smallest, to 300 pounds for the largest. Goats have a wide range of colors–black, brown, white, and may even be spotted.

But no matter the size, color, or purpose–all goats share the same dental pattern. Here, we’ll learn all about goat teeth, what they do, how long they last, and the curious toothless part of a goat’s mouth. We’ll go into detail about each kind of tooth, and its unique purpose for this bleating, sometimes fainting, ruminant. And we’ll answer the question: do goats have upper teeth?

Baby goats (kids) are born without any teeth. In the beginning, they subsist solely on their mother’s milk. They don’t get their first set of deciduous (baby) incisors until they’re about a week old. The first teeth to come in are the lower middle incisors. These are followed by the first intermediate incisors (located at either side of the middle incisors) at about two weeks old.

The third set of incisors, the second intermediate pair, comes in at three weeks old. The fourth and final pair, sometimes called the corner incisors, erupts at about a month of age. By the time they’re a couple months old, kids have a full set of 20 baby teeth; eight incisors and 12 premolars.

Adult teeth: How Many Teeth Do Goats Have?

Like all ruminants (animals with four chambered stomachs, like cows and sheep), goats are diphyodonts, meaning they go through two sets of teeth in their lives. They don’t get their first adult teeth until they’re about a year old. The permanent teeth grow in below the baby teeth, pushing them out as they erupt.

The adult teeth erupt in the same pattern as the baby teeth, beginning with the central incisors. These teeth come in around a year of age, followed at 1.5-2 years by the next incisors. Goats get their third set of permanent incisors between 2.5-3 years, and their fourth set between 3.5-4 years.

Goats don’t have a full set of adult dentition until they’re at least four. By the time they’re eight, these teeth have severely worn, and may even be missing. Goats are browsers, and will nibble just about any green thing they find. They’re particularly keen on woody shrubs and tree bark and limbs. This diet is not easy on their teeth, and if they reach old age, they may have difficulty eating.

Goats have eight incisors in their bottom jaw. The primary role of the incisors is in grasping and pulling food into the mouth. This is done in conjunction with the lips, which are extremely sensitive and mobile. Food is first chewed with the incisors, which break the stems, leaves, and grasses into manageable pieces for the premolars and molars.

After the incisors, goats have a large, toothless gap where a canine tooth would sit in carnivores. Goats have 12 premolars; they sit far back in the cheek part of the mouth, and together with the molars, do the bulk of the goat’s chewing. The premolars have high crowns that grind against each other (bottom and top) to effectively shred and masticate anything the goat chooses to eat.

The largest teeth in a goat’s mouth are its molars. They have 12 molars altogether, and they are instrumental in chewing up the goat’s tough foods. Goats are ruminants, which means they swallow food, partially digest it in one of their stomach compartments, then regurgitate it to chew again. Goats spend much of their lives chewing this cud, and their molars have to stand up to the challenge. Like the molars, they’re specially designed with high ridges that make short work of cud, over and over again.

Do Goats Have Upper Teeth?

Goats do not have upper front teeth, however they do have teeth (molars) on their upper jaw in the back of their mouth.

Where goats would have incisors in their upper jaw, they instead have a “dental pad.” This dental pad is common among ruminants, and functions as a sort of single, large, tough tooth that occludes against the bottom incisors. Cows have a very similar dental structure to goats, for example.

Like all animals, goats are certainly capable of biting humans–especially if they’re hurt or provoked. However, with the dental pad, they’re not likely to do much damage. A goat’s bite is unlikely to break the skin, but may bruise or even mash tender body parts like fingers.

Goat’s don’t generally bite, especially if they’ve been raised around people. They don’t use their teeth for defense; they have horns and hooves for that. So, although you don’t have to worry too much about a goat’s teeth, you should keep an eye out for their horns–especially if you’re doing something they don’t like.

How to Tell a Goat’s Age From Its Teeth

Because goat’s teeth erupt in a regular pattern, no matter the breed of goat, it’s possible to determine their age by looking at their front teeth. First, if they have no adult teeth, they’re under a year old. If they have all of their permanent teeth, then they’re at least four years old. Worn, yellowed, or missing teeth indicate age; the more worn and discolored they are, the older the goat. 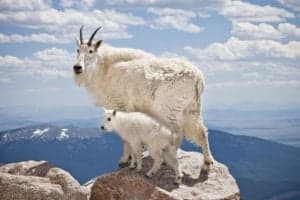 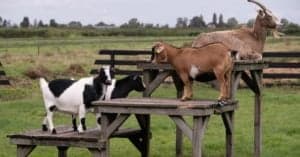 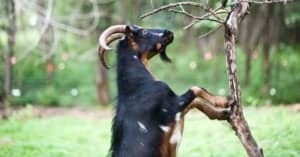