Written by Austin S.
Published: November 13, 2021
© iStock.com/savilleization
Share this post on:
More Great Content:
What Do Dolphins Eat? 10+ Foods in…
Discover the 10 Largest Dolphins in the…
Dolphin Teeth: Everything You Need to Know
Porpoise vs Dolphin: 5 Ways That These…
How Many Dolphins Are Left In The…
Baby Dolphin: 5 Calf Pictures & 5…

“Dolphin Tale’s” leading lady has passed away. The Clearwater Marine Aquarium in Florida announced today that Winter, the dolphin, had died due to an illness on Thursday night.

According to the Clearwater Marine Aquarium, Winter had lost interest in eating earlier this week and veterinarians suspected she had a gastrointestinal infection. She was being prepped for a procedure to help with this when her vital signs and behavior began to incline.

Clearwater Marine Aquarium said she died in the arms of her caretakers. Prior to her death, her caretakers had done everything possible to help her survive despite her declining health.

Winter has long been called a “medical miracle” within the veterinary community. The dolphin lost her tail after being caught in a crab trap line at two months old.

In 2005, she was rescued from the crab trap line. Despite attempts to keep her tail, the trap line had done its damage. The line had cut circulation to her tail flukes eventually leading to the tail’s deterioration and loss.

Winter did not let this stop her. With the help of marine biologists and veterinarians at Clearwater Marine Aquarium, Winter was able to adapt to her new physical form and relearn to swim. She was fitted with a prosthetic tail — a medical first for dolphins.

For years, Winter continued to inspire visitors to the aquarium with her persevering spirit and energy.

In 2011, the movie “Dolphin’s Tale” told the world Winter’s story. She was featured in the film as was her home in Florida. After the film’s release, the Clearwater Marine Aquarium became a center for conversation regarding wildlife interactions with fisheries and Winter became one of the world’s most beloved dolphins.

In addition to inspiring others due to her medical recovery, Winter has also spearheaded talks about conservation. By regulating fishing practices and keeping our oceans clean, we could reduce negative impacts on wild animals such as Winter.

Marine animals are highly susceptible to dangerous interactions with fisheries. They could become entangled in fishing lines or even ingest fishing gear. These cause injuries, illness, and potentially death.

Though impacted by these interactions, Winter was able to survive due to her own resilience and the staff at Clearwater Marine Aquarium.

Not every marine animal will be as lucky which is why we need to do our part to keep our oceans clean and advocate for the wild animals who call it home.

A memorial will be held for Winter at the Clearwater Marine Aquarium on November, 20th.

The aquarium will be closed Saturday, November 13th to give the staff time to grieve.

“Many are inspired by her resiliency,” the aquarium stated in a news release, “this amazing response reminds us of how deeply she has affected millions, including so many on their own health journey.

Texas Showdown: Who Wins a Rattlesnake vs. Coyote Battle? 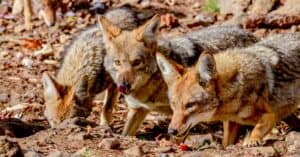