Hummingbirds are of the Trochilidae family and are among the tiniest birds, measuring 3″-5″ in length. The hummingbird family has about 330 species and 115 genera, with breeding ranges covering most of the United States.

Hummingbirds are magnificent organisms that benefit the ecosystem. Hummingbirds are superb pollinators that play an important part in pollination. Their long, slender bills and tube-like tongues allow them to consume nectar from vividly colored flowers, providing them with energy.

Hummingbirds appear to float effortlessly in the air as they fly. Their wings beat so fast (up to fifty-five times per second) that they make a “humming” sound. In fact, they’re the only birds that can hover, fly backward, and even upside down.

Do you know how long these wonderful micro birds live? The hummingbird’s lifetime and lifecycle are explained below.

How Long Do Hummingbirds Live?

The female assembles the nest with spider silk and tiny pieces of plant material, including lichens. The nest is built on a tree branch or inside bushes and plants. These creatures’ nests are so little and well-hidden that it’s impossible for predators to detect them. You may not even be aware that you have one if it is hidden amid your plants or bushes.

Hummingbirds most commonly lay eggs in May. Hummingbirds can have multiple broods per year. Its eggs are around the size of a jellybean or tic tac. A typical nest has two white eggs. The female incubates the eggs and feeds the new-hatched nestlings. The male hummingbird doesn’t help the female build her nest or raise her offspring. He simply awaits the next female.

Ruby-throat eggs hatch in 11-16 days. Ruby-throat nestlings or chicks weigh 0.62 grams when they hatch, which is about one-third the weight of a U.S. penny! Chicks need protein, not sugar, to grow. So, the mother hummingbird catches little insects and spiders for them.

Ruby-throated hummingbirds start flying at around 21 days. When they are ready to fly, they leave the nest, which is referred to as fledging. In the first ten days after leaving the nest, fledglings are fed by their mothers. A month or two in after hatching, hummingbirds are completely self-sufficient.

Adult hummingbirds have the greatest metabolism of any animal in the world! To keep it up, they must eat every 10 minutes or so and will visit up to 2,000 flowers daily! Flowers with red or orange stamens are preferred by ruby-throated hummingbirds.

A hummingbird’s diet contains two-thirds of its body weight in sweet nectar. Their large beaks and grooved tongues are used to explore flowers for nectar, ingest fruit juices, and catch insects. Eating is a hummingbird’s focus, apart from mating and reproduction.

At around a year old, hummingbirds start mating and reproducing. Male hummingbirds, like many species, have territory. Males will execute courtship displays to convince females that they are the best mate nearby. She’ll mate with him if she likes his show. If not, she moves on.

Hummingbird mates do not raise the chicks together. A male hummer will mate with any female he can attract to his area. These aren’t lovebirds!

How Old Is the Oldest Living Ruby-throated Hummingbird?

How long do hummingbirds live normally? Well, The oldest living recorded ruby-throated hummingbird was 9 years and 1 month old. She was discovered after being recovered and rereleased in West Virginia.

Male hummingbirds rarely live above the age of 5 years, but females normally do. Male mortality may be increased because of weight loss during the breeding season, high energetic needs of defending a territory, and migration.

How Do Most Hummingbirds Die?

Hummingbirds die from predators, flying into stationary objects, being hit by vehicles, difficulty during the migration or severe weather, disease or other ailments, or simply old age.

Common predators are small, fast raptors like sharp-shinned hawks and Mississippi kites. They are even hunted by outdoor cats, who will attack the hummingbird while it is sitting or sleeping on a perch or when it’s busy reproducing or foraging.

Other predators, particularly in its tropical wintering areas, include lizards and snakes. Bats, squirrels, and chipmunks are known to prey on nests as well. Also, artificial barriers like habitat degradation and pesticide use harm hummingbird populations. 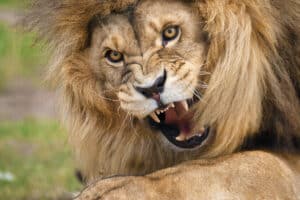