When it comes to comparing some of the fluffiest possible dog breeds, what are the differences between a keeshond vs samoyed? They are both covered in thick, warm fur- but what other similarities do they have, and what things set them apart from one another?

Key Differences Between Keeshond vs Samoyed

Let’s take a closer look at all of these differences now.

It may be difficult to tell at first glance, but there are some size differences between the keeshond and samoyed. For example, the keeshond is much shorter than the samoyed, but a few inches on average. Additionally, the samoyed weighs more on average than the keeshond. But by how much? Let’s take a closer look at these figures now.

The samoyed weighs anywhere from 35-65 pounds, depending on gender, while the keeshond weighs an average of 35-45 pounds. As you can see, the weight differences between these two breeds overlap slightly, but the samoyed is a larger dog than the keeshond overall.

Given their thick and fluffy coats, both of these dog breeds need consistent grooming and brushing to keep their appearances up. The keeshond and the samoyed are both high maintenance breeds for this reason, but their coats are simply too stunning to ignore!

Keeshond vs Samoyed: Ancestry and Breeding

Both the keeshond and the samoyed are fantastic companion animals for families with young children. These dog breeds are alert, relatively friendly, and eager to please. However, the samoyed exhibits more stubbornness during training compared to the extremely easy going keeshond. Given the background of both of these dogs, they need to be exercised frequently so that they don’t suffer from separation anxiety and nervous behaviors.

While it depends on the individual dog, the samoyed lives anywhere from 12-14 years on average, while the keeshond lives 13-15 years on average. However, both of these dogs require ample exercise and proper nutrition in order to live long and happy lives, so keep this in mind if you plan on adopting either of these two dog breeds into your home!

The 5 Biggest Spiders in New Mexico 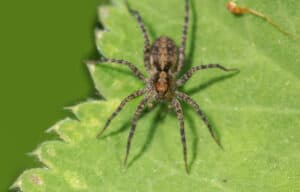