Did you know that not only are there dangerous spiders in Texas but one of them is considered one of the most dangerous in North America? Texas is home to many Texas-sized things, but the lone star state is also home to some of the world’s tiniest venom slingers. There are almost 1,000 species of spiders in Texas, but only four of those have enough venom to potentially hurt a human.

Here, we’ll learn about the four most dangerous spiders in Texas. We’ll find out what they look like, where they live, what they eat, and how they hunt. Then, we’ll take a look at where to find each species. By the end, you’ll know how to identify these deadly spiders and how to avoid them.

Black widow spiders just might be the most famous of the dangerous spiders in Texas. Females grow up to one inch long and have black bodies with characteristic red hourglass markings. Males grow to only ¼ inch long and look more brown than black. Black widows get their name from the females’ habit of eating the male after mating.

Black widow bites are often not very painful at the outset. But, their venom can produce intense nausea, muscle cramping, and even partial diaphragm paralysis, which can make it difficult to breathe. However, serious complications from black widow bites are rare in all but very young children and very old people. There have been no recorded deaths from black widows in the United States.

Where to Spot Black Widows

Black widows are outdoor spiders. They favor disused wood or debris piles and outdoor buildings, like sheds. They also live in or around animals’ burrows and foliage. The primary settings that draw black widows are those with insects to hunt and a suitable location for their webs.

Brown recluses are considered some of the most dangerous spiders in Texas, though bites are rare. These spiders grow up to one inch in leg span, with a ¼-inch long body. Brown recluses are also known as violin spiders because of the violin-shaped marking on their cephalothorax. They have long legs, large chelicerae (mouthparts), and tan abdomens.

Brown recluse spiders have very potent venom that has the potential to destroy the tissue surrounding the bite. The most common side effects of brown recluse bites are ulcers and tissue damage. Rarely bite wounds become infected and lead to the death of the victim. However, there have been few recorded deaths from brown recluse bites.

Where to Spot Brown Recluses

Brown recluse spiders don’t like high-traffic areas, but they prefer indoors. These dangerous spiders in Texas are most commonly found in attics, basements, closets, and pantries. Any little used part of a home, garage or other manmade structure may become home to a brown recluse.

Unlike some of the other dangerous spiders in Texas, yellow sac spiders do not spin webs. Instead, they actively hunt down and kill insects using their senses to detect the prey’s movement. Female yellow sac spiders are notoriously aggressive when it comes to defending their eggs, and will not hesitate to bite humans if they stray too close.

Where to Spot Yellow Sac Spiders

Yellow sac spiders commonly live indoors and have a habit of creeping into clothing or bedding that’s been left out. Unfortunately, when humans pick up the clothing, the yellow sac often bites in self-defense. Fortunately for victims, symptoms are mild, though the bite presents similarly to a bite from a brown recluse. Yellow sac spiders also live outdoors, particularly in gardens and low-lying foliage.

Brown widows may not be as famous as black widows, but they’re still one of the most dangerous spiders in Texas. Unlike black widows, brown widows range from tan to dark brown in color. Their legs feature tan, black, and brown segments, while their cephalothoraxes are dark brown. The most striking feature of the brown widow is its abdomen, which is cream-colored with distinct markings. The underside of the abdomen features an orange hourglass marking akin to the red hourglass of the black widow.

Brown widow venom is much more potent than black widow venom. However, brown widows inject almost no venom when they bite, and they’re nonaggressive, so bites are extremely rare. Symptoms of a brown widow bite include redness and mild pain; complications are exceedingly rare. No deaths have been attributed to brown widows in the United States.

Where to Spot Brown Widows

Brown widows live outdoors in a variety of locales. They may be found in garages or garden sheds, as well as empty mailboxes, or even on the insides of tires. Unlike black widows, who stick mostly under cover, brown widows come out in the open to build their nests and hunt. These dangerous spiders in Texas may also be seen in abandoned vehicles, brushes, or outdoor furniture. 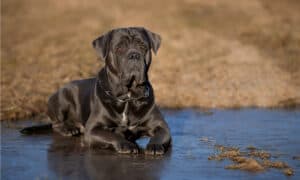