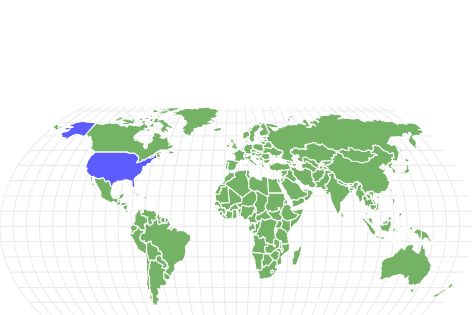 View all of our Yellow Sac Spider pictures in the gallery.

View all of the Yellow Sac Spider images!

A Yellow Sac Spider is a beneficial species of sac spider native to the United States, where it is found primarily in the northeastern to midwestern states.

Similar species to the American version are found in many countries across the world including Germany and Australia. These spiders are active hunters who do not wait in a web for prey to come to them, but rather go out in search of food. They are nocturnal, so they do build small “sac” webs or nests during the day, in which to rest.

There is some fear of these spiders because Yellow Sacs have been known to bite humans, however, there is little cause for alarm when encountering or even being bitten by a Yellow Sac Spider. Though they are somewhat venomous, mildly aggressive when provoked, and their bite can in extremely rare cases create necrotic tissue, Yellow Sac Spider venom is nowhere near as potent as that of a Brown Recluse and is not remotely potent enough to be fatal to humans. There is actually only one documented case of a Yellow Sac bite causing necrotic tissue.

The color of these spiders varies so much that it is not a good indicator of whether you have found a Yellow Sac Spider. For that, you will need to rely on other features. To begin with, a Yellow Sac’s legs are significantly longer than its quarter-inch body. The front two legs will be longer than the other six legs. They are typically very pale, sometimes even bordering on translucent, and the tips of their legs are much darker than the rest of their legs.

They will most likely not be found in their web, but if they are, the web will be very small and tunnel or sac-shaped. They have two rows of eyes, with four symmetrical eyes on each row. They tend to have a stripe from the middle of their body to the back, but this can be hard to see on some colorations. They will most often be seen at night.

Yellow Sac Spiders can be found in the woods, and also in homes and gardens. These spiders are hunters, but they tend to stick within a few yards of their resting webs. They like to make these under woodpiles and yard debris, behind clutter, and around baseboards. Inside the home, they like dark, damp places with lots of places to hide and prey to hunt.

Yellow Sac Spiders are carnivores, though they will occasionally drink nectar. They enjoy hunting insects that we normally consider pests, including cockroaches and insect eggs. They will also eat other smaller spiders and, when resources are limited, will even consume their own egg sacs.

Prevention: How to Get Rid of Yellow Sac Spider

Yellow Sac Spider Bites: What You Can Expect

A bite from a Yellow Sac Spider will most likely be red and swollen. Sometimes it is possible to see fang marks, but this is not common. As previously stated, Yellow Sac Spider bites are not deadly. If you are bitten, the bite may be quite painful for 90 minutes or so. After that, the most common symptoms will be redness, itchiness, and swelling. In some rare instances, the person may feel nauseated. There has only been one documented case of such a bite developing an ulcer, also known as necrotic tissue.

The most important thing to do if bitten by a Yellow Sac, as with any wound, is to keep the bite area clean and dry, perhaps with some over-the-counter antibiotic ointment and a bandage, to reduce the risk of infection. Recovery usually happens within just a few hours. If symptoms persist much longer than that, get worse, or in the unlikely event that the bitten person shows any signs of anaphylactic shock, seek medical attention immediately.

The easiest thing to do, if you live in an area where Yellow Sac Spiders are common, is to avoid a bite altogether. To do this, always wear gloves when gardening or picking up firewood or lawn debris, particularly in colder months. Shake out any clothing in closets that haven’t been worn in a long time. Keep your home as clutter-free as possible.

Is a yellow sac spider poisonous?

No, they are not poisonous. Yellow Sac Spiders are venomous however, though their venom is very mild and unlikely to cause any lasting damage

Where do you find yellow sac spiders?

These are found from the American midwest eastward to the New England states.

What does a yellow sac spider bite look like?

In some cases, there may be fang marks, but more likely it will be red and swollen. It will be easier to identify it by the pain and itchiness.

How do I get rid of yellow sac spiders?

Using a Bifenthrin-based insecticide and removing areas where they like to hide and make nests, such as clutter and debris is the easiest way, besides contacting an exterminator.