The 9 Most Crocodile-Infested Lakes in the Americas

While the world is full of grandeur, it also has its fair share of frightening features. Who fears nothing? While you may not have an active fear of crocodiles, let’s be honest: we won’t be swimming in crocodile-infested waters anytime soon! But that doesn’t change the fact that it mesmerizes the mind.

Crocodiles are enormous semi-aquatic reptiles that thrive in Africa, Asia, the Americas, and Australia. Crocodile is also a generic name that refers to all living members of the Crocodilia order, including alligators and caimans. Crocodiles and alligators belong to different biological families, despite their appearance. Compared to alligators and caimans, crocodiles have slimmer and longer heads and a V-shaped rather than a U-shaped snout. Crocodiles are also distinguished from other crocodilians by their significantly higher levels of aggression. So, here are the 9 most crocodile-infested lakes in the Americas.

The 9 Most Crocodile-Infested Lakes in the Americas

Lake Arenal (Spanish: Lago Arenal) is a lake located in Costa Rica‘s northern highlands. It’s currently Costa Rica’s largest lake, covering 21,000 acres (85km2), and its depth varies seasonally between 30 and 60 meters (100–200 feet). Locals have spotted crocodiles at Lake Arenal, situated between Tilarán and San Carlos, but it should not be worrisome.

According to Iván Sandoval, a biologist at the National University (UNA), they have had reports about the problem for years. He also stated that the location was not in their initial distribution because it was an artificial lake. However, it sets the conditions for the reptiles to flourish. They were probably released carelessly at some point, as happened at San José Lake in La Paz Park. Another theory says that crocodiles may have exploited the canals made by the irrigation project that connects the lake to Guanacaste’s lowlands.

Crocodiles live throughout the Americas, but the Everglades and the numerous swamps and lakes make Florida one of their most populated homes. In addition, only in South Florida can you see alligators and crocodiles living together in the wild. Bear Lake is a 107-acre man-made lake built in 1959 and designated a Fish Management Area in 1961. The lake comes highly recommended for its rich biodiversity: shrimp, fish, alligators, sea turtles, manatees, and other marine species breed in the brackish estuaries and canals of the mangrove habitat.

The American crocodile lives in the mangrove ecosystem, making it one of the rare sites where crocodiles and alligators coexist. While fishing is allowed, obtaining a permit is the least of your troubles. Gators and crocs lurk offshore, waiting for anglers to cast their lines. Then it’s a race to get their lines in before the opportunistic predators strip the fish. Therefore, successful fishing at Bear Lake requires patience and vigilance.

Nicaragua‘s Lake Nicaragua, sometimes known as Cocibolca or Granada, is a freshwater lake. It’s the largest lake in Central America, the 19th largest lake in the world (by area), and the tenth-largest in the Americas, with an area of 2,042,000 acres (8,264 km2). Although it’s a freshwater lake, it is home to sawfish, tarpon, and sharks. The sharks were thought to be trapped within the lake, but this was proven incorrect in the late 1960s when researchers discovered that they could jump along the rapids of the San Juan River, which connects Lake Nicaragua to the Caribbean Sea, almost like salmon. The San Juan River and Lake Nicaragua are also home to American crocodiles. While attacks do happen occasionally, fatalities are extremely rare. They frequent places along both Panama’s beaches and the Panama Canal, and it would be highly advisable to swim only in designated areas.

Gatun Lake, located south of Colón, Panama, is a vast freshwater artificial lake. The Chagres River was dammed in the early 20th century to create Gatun Lake. One beneficial outcome of this was the creation of wildlife pockets around the lake, which are home to crocodiles, sloths, and other monkey species. Some of these critters appear as your boat travels across the lake. Crocodiles should not pose a threat. Yes, after being placed under protection, their population doubled, and there have been recent attacks. However, these attacks are more likely to occur when someone immediately hits the water surface. All crocs congregate in the shallows, so you should be alright if you stay out of the water. To make your vacation safer, make sure you know when the crocodiles are at their most dangerous.

Panama is home to American crocodiles due to its tropical climate. Thankfully, they don’t have the same nasty temper like the rest of the crocodilian family. For the typical traveler, this doesn’t make them any less terrifying. During the mating season, crocodiles are at their most dangerous. That implies you must understand their reproduction cycle to determine the optimal time to avoid them.

Lake Izabal, commonly known as the Golfo Dulce, is Guatemala’s largest lake, covering 145,693 acres (589.6 km2) and reaching a maximum depth of 18 meters (59 ft). The lake is only 3 feet above sea level and drains into the Caribbean Sea’s Gulf of Honduras via the smaller Golfete Dulce and the Rio Dulce.

This lake is a perfect spot for birdwatching and is home to various fish, crocodiles, lizards, and a large number of herons, water birds, and mammals. Take pleasure in viewing nature, but always be cautious. A park on the other side of the lake safeguards wildlife and endangered species like the last remaining crocodiles and the famous manatees.

Ingraham Lake is a body of water in Monroe County, Florida, nestled within the Everglades National Park boundaries. Everglades National Park is home to around 75% of the estimated crocodiles in South Florida, and Ingraham Lake is the southernmost lake in the continental United States, measuring less than 1,000 acres (4 km2). Crocodiles and sharks abound in this area, and they sit at the bottom of the deep runs waiting for prey to swim or move. Being in the water up to your waist here is a terrifying experience. It’s not all doom and gloom, though. Numerous birds and other creatures preen the mudflats and prowl the murky waterways, salt or no salt.

The Coba Lake or Lake Coba (Spanish Lago Cobá) is a nearly circular lake on the Yucatán peninsula near the ancient Maya city of Coba. A reed zone surrounds the lake, which is home to crocodiles. Morelet’s crocodile is a crocodile known as the Mexican crocodile. It’s endemic to the Atlantic waters of Mexico, Belize, and Guatemala. It typically reaches a length of around 3 meters (9.8 feet). Coba is around one end of a beautiful lake that has shown to be a perfect area for croc-spotting. It’s a safe assumption that some residents feed the crocodiles from the pier to profit from tourists visiting Coba’s Mayan ruins.

Lake Azuéi, also known as Étang Saumâtre, is Haiti’s largest brackish water lake and Dominican Republic’s and Hispaniola’s second-largest lake, following Lake Enriquillo. The lake is a striking shade of blue, and its surroundings teem with brush and cacti. Over 100 bird species thrive here, including American flamingos and other animals found nowhere else in Haiti. The lake is also home to an abundance of American crocodiles, causing dread among the locals.

The average length of an American crocodile is 4 meters (13 feet), but specimens as large as 6.25 meters (20.5 feet) or 7 meters (23 feet) have been documented in Étang Saumâtre. The lake is notable for its high crocodile population, reaching 9.6 crocodiles per kilometer in some areas, with an average density of 6.3 crocodiles per kilometer for all size classes. Their diet consists primarily of birds and fish (Cichlid). Adults devour domestic animals like dogs and goats, as well as turtles.

The Dominican Republic’s Lake Enriquillo (Spanish: Lago Enriquillo) is a hypersaline lake in the country’s southwestern area. It’s the largest lake in the Dominican Republic, Hispaniola, and the entire Caribbean, measuring 92,665 acres (375 km2). With that in mind, it is home to the Caribbean’s largest population of American crocodiles and the sole natural habitat for crocodiles in the country. Crocodiles do not attack people in the Dominican Republic. They are relatively docile creatures, yet they must be respected and cared for because they are wild animals. A crocodile may attack if disturbed or tormented, and some adult male crocodiles can cause havoc in communities by attacking livestock and pets.

Moreover, the lake is home to three different fish species and two rare iguana species! Both the Ricord’s and rhinoceros iguanas live on the central island of Cabritos. When it comes to crocodiles and iguanas, Lake Enriquillo is the place to be. 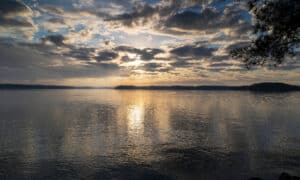 How Deep is Lake Lanier? 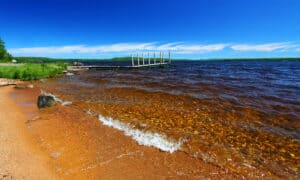 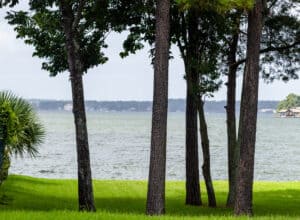 How Deep is Lake Conroe? Discover the Deepest Texas Lakes