Disney describes Magic Kingdom Park as a “land of endless enchantment, where your fantasy becomes a reality”. These lucky park visitors had some extra entertainment for their day out! A small black snake put in an appearance and stole the show.

The entertainment at Magic Kingdom does not normally involve snakes. Some of the top attractions include the Jungle Cruise boat tour, the Haunted Mansion labyrinth of haunted chambers and soaring high on Dumbo the Flying Elephant.

The parks are located southwest of Orlando, Florida and attracts hundreds of thousands of visitors every year. If you really want to see some snakes, you could take the Wildlife Express Train and visit the conservation station. Here you can see tarantulas, scorpions, millipedes and many types of snakes. But this little snake was not an exhibit!

We see the snake making their way across a pathway. Some of the park employees are helping it to find a safe path to the garden beyond the path. Despite their efforts, one man nearly treads on its tail! Once it reaches a group of children, they start to scream and run around but within seconds it has gone.

Florida is a great place for snakes to live and is home to many snake species. This is because Florida provides many perfect habitats for snakes to thrive – ranging from subtropical in the north to tropical in the south. It is rare for temperatures to drop below freezing.

Added to that, is all the vegetation that snakes love to hide in. They use it to ambush their prey, avoid their predators and regulate their temperature. Florida also provides an abundance of prey from tiny insects all the way up to goats and deer.

Some of Florida’s snakes are small but some are huge! There are venomous snakes here but many are nonvenomous. They come in all colors! One of the small snake species is the Brahminy blind snake which is also called the worm snake. Although they are not native to the area, there are now many of them living in the state. They rarely grow longer than 6.5 inches and are quite thin. Their color can be grey or purple and they are smooth and shiny. These snakes burrow into the soil and eat ants.

One to look out for is the Florida rattler – a venomous snake. They are one the heaviest venomous snakes in the world and are only found in the south east of the US. Luckily, the snake in this video is not one of these!

Discover the Highest Point in Missouri 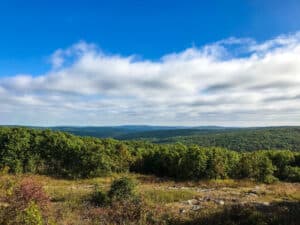