What Were the Largest Flying Dinosaurs?

iStock.com/Warpaintcobra
Share this post on:
More Great Content:
7 of the Largest Prehistoric Animals Ever…
Discover the 8 Smartest Dinosaurs Ever to…
Meet Every Dinosaur Featured in Jurassic World…
Top 10 World’s Largest Dinosaurs Ever
9 Dinosaurs With Long Necks
Meet the Largest Carnivorous Dinosaur in History…

Dinosaurs were rather scary reptiles. The massive T-rex could bring down other monstrous dinosaurs with a single bite. Even herbivores like Ankylosaurus could smash would-be predators with their tails. Although we like to think about the terrestrial dinosaurs as being frightening, other terrors of the ancient world roamed the air, ready to swoop down on prey. Today, we’re going to show you the largest flying dinosaurs that lived in the past. You’ll learn how large they grew and what made them so fearsome.

Pterosaurs vs Dinosaurs: Are They Different?

Strictly speaking, very few flying dinosaurs existed. The pterosaurs on this list are not dinosaurs. Pterosaurs may seem like dinosaurs, but they belong to different taxonomical groups. In essence, pterosaurs are flying reptiles, and they are distinct from dinosaurs. However, pterosaurs and dinosaurs share a common ancestor group called Avemetatarsalia.

Thus, when we ask, what were the largest flying dinosaurs, we’re actually asking about the largest pterosaurs. Sure, this is pedantic, but it’s worth noting the difference between the two groups. After all, studying dinosaurs and pterosaurs can be confusing, especially when you consider that many dinosaurs had feathers.

How to Measure the Largest Flying Dinosaurs

The second measure we could use is the height of the creature. The largest pterosaurs were also among the tallest. Third, we may consider the estimated mass of the dinosaur even though that may be hard to find. By using a combination of these three measures, we can determine which of the flying dinosaurs was the biggest of all time.

What Were the Largest Flying Dinosaurs?

We are about to embark on a nearly impossible task. The incompleteness of some fossil remains of these dinosaurs makes it hard to definitively state which one is bigger in some cases. However, we do have a good idea about some more pterosaurs with more complete fossil sets, so they are given priority.

Without further ado but with a bit of uncertainty, we will show you five of the largest flying reptiles ever and explain how large they were.

The first creature that we’re going to explore is called Tropeognathus. The fossilized remains of this pterosaur were found in South America. The maximum wingspan suggested for this creature was 27ft or 8.2 m, so it had a very large wingspan. The height estimate for this creature was about 5.5-6 ft tall, so it wasn’t as imposing as some other pterosaurs on this list.

Thanatosdrakon, aside from having an incredible name, also had quite the wingspan. This pterosaur is estimated to have a wingspan somewhere between 23 ft and 30 ft.

The Thanatosdrakon amaru is sometimes known as the dragon of death, and it could have stood between 10 and 12 ft tall based on estimates and reconstruction of fossils.  This carnivorous pterosaur is believed to be a carnivore and perhaps even an apex predator.

Fossils of the Cryodrakon, or cold dragon, were found in Canada. Experts discovered that the pterosaur had a wingspan of about 16 ft. Extrapolating that data to an adult version of the pterosaur revealed that it may have had a 33 ft wingspan. That would make this pterosaur potentially tied for 3rd place with Thanatosdrakon. Yet, it seems more likely that Cryodrakon would hit the 30 ft mark, so we’re sticking it in this spot.

Having this pterosaur at number two is bound to rile up some people. Some experts insist that the Hatzegopteryx had the higher wingspan, but it could have just as easily been the same or less.

The estimates of this pterosaur’s wingspan vary quite a bit. Scientists do know that pterosaur was shorter and stouter than the creature to whom we awarded first place. However, Hatzegopteryx’s skull was long and heavy, and evidence suggests this creature was powerful and deadly when it took flight.

After all, some sources claim that it had a wingspan up to 36 ft long. That could have been shorter than Hatzegopteryx’s. Yet, this was a tall pterosaur with a very long neck and stood 18 ft tall, about the height of a giraffe. Between the pterosaur’s height and wingspan, both of which are superior to Hatzegopteryx or potentially too close to call, we’re going to consider this pterosaur the biggest flyer of them all.

Challenges to Quetzalcoatlus as the Largest Flying Dinosaur

Although Quetzalcoatlus is staying in our top spot, a major challenger has emerged. This pterosaur is called Arambourgiania philadelphiae. Some estimates claim that this pterosaur had a wingspan that measured 39 to 46 feet or 12 to 13 meters.

If that was the case, this would be the largest creature. However, modern estimates claim that its wingspan was overstated. Present estimates have since been drawn back on that figure. This creature’s wingspan may have been as low as 21 ft or 7 m.

The fragmentary nature of this pterosaur’s bones along with the wild differences in size estimates makes it impossible to say this creature was the largest.

All in all, Quetzalcoatlus has the most consistently recorded wingspan. Yet, paleontologists are constantly making new discoveries. What we “know” about these pterosaurs could change rapidly, so keep a lookout for any updates! 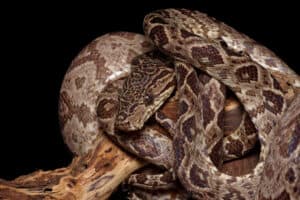