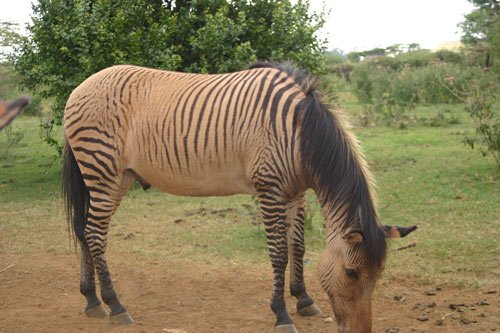 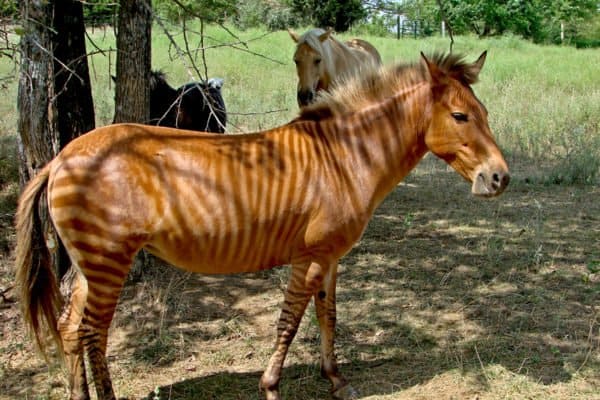 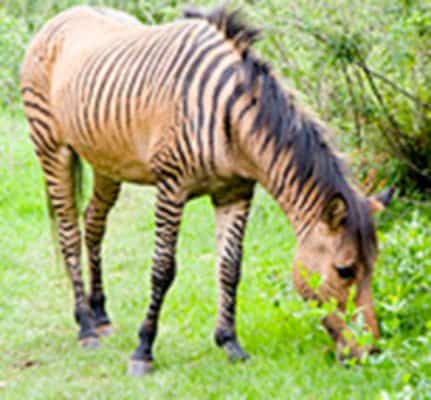 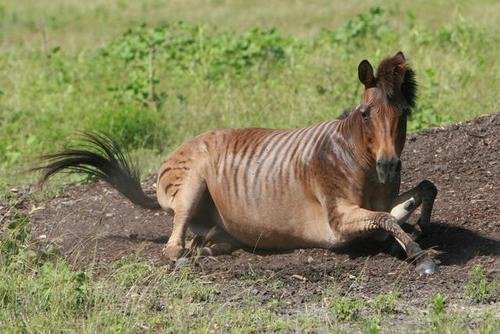 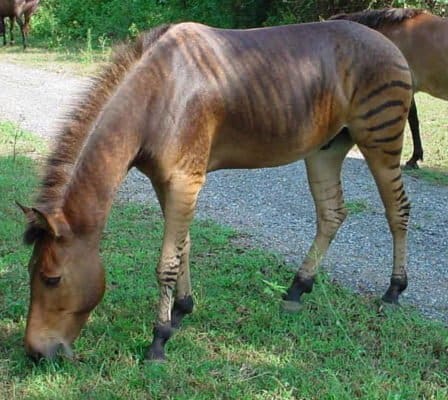 The offspring of a Zebra and Horse parents!

The Zorse is one of a number of equine hybrids that are known as Zebroids, which is the name given to an equine hybrid that has Zebra ancestry. The Zorse is the result of cross-breeding a generally male Zebra (stallion) with a female Horse (mare) to produce an animal that looks more like a Horse than a Zebra, but one that has stripes. The Zebra part also gives the Zorse resistance to certain pests and diseases that normally affect both Horses and Donkeys, meaning that they are not only sturdy but also very hardy animals. Due to the fact that there are not only three different sub-species of Zebra but also nearly 300 different breeds of domestic Horse, the Zorse can vary quite dramatically particularly in size and colour, depending on its parents.

The Zorse is very Horse-like in appearance as it inherits its shape, size, colour and temperament from its mother. One of the Zorse's most notable features is the dark stripes that are boldest on their legs and rear, along with also commonly being found on the rest of the body, neck and head. The Zorse tends to have short, coarse fur that can range in colour from tan to brown to black, with a darker mane and tail (although the exact characteristics of the Zorse are dependent on the breed of the female Horse). Zorses have a large head with a long muzzle, pricked up ears and large, dark eyes with long eyelashes that help to stop things from getting in their eyes. Zorses have long, thin legs that are incredibly muscular and end in generally black (but sometimes white) coloured hooves that are made from horn and allow the Zorse to be more sturdy when moving through various different terrains.

Unlike the case with the Zonkey where there have been a number of wild Zonkey sightings reported, it is almost impossible for a fully wild Zorse to occur without Human intervention of some kind. There are three different sub-species of Zebra that are found in eastern and southern Africa on the vast open grasslands and savannah, but the incredibly rare wild Horse is historically native to parts of Europe and Asia meaning that the two species would not come together naturally in the wild. In parts of Africa though where Human settlements are either close to or intrude on the Zebra's natural habitat, it is possible for a semi-wild Zorse to occur with the mating of a wild Zebra with a domestic Horse. Nearly all of the world's Zorses however, are found either in zoos or animal institutes around the world, with a number also being used as work horses particularly in parts of North America.

In the wild, both Zebras and Horses roam throughout their natural environment in herds that can contain anywhere from two to more than two hundred individuals, making Zorses relatively sociable animals that prefer to live with other equines. Their temperaments however, are generally similar to those of their mother, including their strong flight response which is heightened by their Zebra side. Zorses are strong and muscular animals that spend the majority of their lives grazing and along with the fact that they are known to have better night vision than people, they are known to have almost 360 degree vision with the exception of a blind spot in front of their nose and directly behind them. The Zorse's large, pricked ears give it incredible hearing and their large nostrils mean that they also have a keen sense of smell.

Zorses are produced when a male Zebra mates with a female Horse. After a gestation period that usually lasts for around 11 months, the female Horse gives birth to a single Zorse foal. Like the offspring of numerous other hoofed-herbivores, the Zorse is able stand up within an hour after birth and begins to canter a few hours after that. Although they are much smaller in size than their parents, the Zorse is born with incredibly long legs that are actually nearly their adult length already. As with other hybrid animal including both Zonkeys and Mules, the Zorse is sterile meaning that although they still display normal breeding behaviour they are unable to produce offspring of their own. Zorses tend to be very healthy and hardy animals that can live to be more than 30 years old.

Like other equines including both Zebras and Horses, the Zorse is a herbivorous animal meaning that it only consumes plants and plant matter in order to gain all of the nutrients that it needs to survive. They spend almost all of their time grazing and like Horses, the Zorse has an advanced sense of taste which allows it to sort through grasses and grains in search of its most favourable foods. The Zorse primarily eats grasses, herbs and flowers that grow on ground level, along with leaves, fruits and berries that it has to pull from the trees or finds on the floor. Zorses generally will not eat plants that are poisonous, but are known to resort to eating plants that contain toxins when there is not an adequate supply of more nutritious food. Oddly enough the Zorse's digestive system is designed to have food flowing through it almost continually, allowing them to graze nearly all day if they can.

On the African plains, Zebras are an important source of food for a number of large carnivores including large felines such as Lions, Leopards and Cheetahs along with Hunting Dogs and also Hyenas. Zorses tend to be slightly larger in size than Zebras (depending on the size of their mother) and so would be a bit harder for these powerful predators to kill. In their native habitats, wild Horses are preyed upon by Wolf packs or Bears that try to single out a generally smaller or weaker individual from the herd. The biggest threat to both wild Horses and Africa's Zebra populations though is habitat loss either in the form of growing Human settlements or to clear land for agriculture, with populations declining throughout much of their natural ranges.

The Zorse is a cross between a Zebra stallion and a domestic mare, but it is also possible to use a Zebra mare and a domestic stallion. This is not that common however because owners of valuable Zebra mares don't want to waste a year of their breeding life trying to produce a hybrid when they could be producing a Zebra foal instead. In Africa, Zebras and Horses are often cross-bred to create Zorses that are used as trekking animals to transport both people and goods up and down the mountains. As with their Zebra father, the pattern of the Zorse's bold stripes is unique to each individual animal (much like the fingerprint of Human), meaning that they can be easily distinguished between one another, and if they were found naturally in the wild it could give them some form of camouflage into their surrounding environment.

Due to the fact that the Zorse is a cross-bred animal and that it cannot continue a population, it is not listed by the IUCN. The three Zebra species though are all listed with the Plains Zebra as Least Concern, the Mountain Zebra as Vulnerable and the Grevy's Zebra as Endangered. The Przewalski's Horse which is the only species of wild Horse remaining, is actually Critically Endangered with populations falling so low that reintroduction schemes began reintroducing captive individuals back into their natural environment.