What is a hybrid animal? What are the different types of hybrid animals? Are they creatures that only exists in fables and myths? No! In fact, many crossbred animals are real!

Hybrid animals are usually the reproductive result of intercourse between two similar animals, like lions and tigers. Lab hybrid animals also exist. Scientists call the process is “somatic hybridization,” and it allows them to manipulate genes to create new species with useful traits from both parents.

Check out the list below for 12 real examples of incredible hybrid animals.

The offspring of a male lion and female tiger, the liger is probably the most famous hybrid animal of all and the largest of the big cats.

Ligers are usually much bigger than either parent. The largest non-obese liger in the world weighs 1,000 pounds, and the heaviest one ever recorded weighed an astounding 1,600 pounds.

Unlike some hybrid animals, it would be nearly impossible to find ligers in the wild because lions and tigers don’t naturally inhabit the same regions.

They usually look and behave more like lions than tigers, but they do show tiger traits such as a love for swimming and striped backs.

You can read more about ligers here.

Nobody could fault you for thinking a tigon should basically be the exact same animal as a liger. After all, they’re both mixes of lions and tigers.

However, when a male tiger mates with a female lion, the resulting offspring is a tigon.

Tigons are much smaller than ligers, and they tend to be smaller than both of their parents. They typically look more like their tiger fathers, but they possess traits from their lion mothers, such as the ability to roar and love for socialization.

These animal hybrids do not exceed the size of their parent species because they inherit growth-inhibitory genes from both parents, but they do not exhibit any kind of dwarfism or miniaturization; they often weigh around 180 kilograms (400 lb).

Wholphins are one of the rarest hybrid animals. They come from the crossbreeding of a female bottle-nosed dolphin and a male false killer whale (a member of the dolphin family that isn’t related to killer whales).

Citizen wholphin sightings in the wild are common, but concrete evidence still eludes scientists. Currently, we can only reliably see these animal hybrids in captivity.

Wholphins are an extremely interesting balance of their parents. Their skin is a dark gray — the perfect blend of light gray dolphin skin and black false killer whale skin. They also have 66 teeth, which is the precise average of dolphins’ 88 teeth and the false killer whale’s 44 teeth.

Leopons are beautiful and uncommon hybrids resulting from a male leopard and female lion union.

Leopons grow to be nearly as large as lions, but they have shorter legs like a leopard. The animal hybrids also have other leopard traits, including a love for water and climbing chops.

Did You Know? When a male lion mates with a leopardess, the resulting offspring is called a lipard. Male lions are typically about 10 feet long and weigh around 500 pounds, but a female leopard is usually only about 5 feet long and weighs about 80 pounds. Because of the immense size difference between a male lion and a female leopard, this pairing happens very rarely.

Beefalo are the hybridization of buffalo and domestic cattle.

In most cases, breeders create beefalo by pairing a domesticated bull with a female American bison. Unlike many other types of animal hybrids, beefalo are able to reproduce on their own, which is useful.

These animals were intentionally crossbred by humans to improve beef production and carry the best traits of both species. They produce leaner, more flavorful meat like bison, but are more docile and easier to raise like domestic cattle.

Typically, beefalo are 37.5% bison and mostly resemble cattle. Some breeds are 50% or more bison and sometimes called “cattalo.” In addition, any hybrid that resembles a bison more than a cow is usually considered an “exotic animal” rather than livestock.

Grolar bears, as you might expect, are a cross between a grizzly bear and polar bear.

These animals are also sometimes called “pizzly bears,” and some First Nations peoples call them “nanulak,” which is a blend of their words for polar bear, “nanuk,” and grizzly bear, “aklak.”

Grolar bears are interesting because, generally speaking, polar bears and grizzlies have a mutual contempt for one another and will rarely coexist in captivity or in their natural habitats. However, extreme situations and human interventions have produced more of these adorably shaggy, caramel-colored hybrid bears.

They typically grow to be slightly smaller than polar bears, averaging 60 inches tall at the shoulder and around 1,000 pounds, but they’re better able to survive in warmer climates thanks to their grizzly bear genes.

Another stunning and intriguing big cat hybrid is the jaglion, which comes from the mating of a male jaguar and a female lion.

Not much is known about jaglions simply because so few exist. However, an unintentional mating between a black jaguar and a lioness resulted in two jaglion cubs. One has the coloring of a lion and the rosette-pattern spotting of a jaguar, but the other sports a breathtaking dark gray coat with black spotting thanks to the dominant melanin gene found in black jaguars.

Offspring produced by the opposite pairing of a male lion and female jaguar are called liguars.

Technically, a zebroid is actually a hybrid of a zebra and any equine species. When paired with a horse, the result is called a “zorse.”

Zebra hybrids are usually infertile and pairings are rare. For example, we call the offspring of a male donkey and a female zebra a ‘hinny,’ but they’re extremely uncommon.

Zebra hybrids usually have the appearance of whichever animal they have been crossbred with while still retaining the striped coat of a pure zebra. Most of these hybrid animals don’t have fully striped coats. Instead, the stripes are usually found on just the legs or non-white areas of the body, depending on the genetics of the non-zebra parent.

One of the cutest and cuddliest hybrid animals is the geep, an endearing cross between a goat and a sheep.

Despite being absolutely adorable, the geep is exceptionally rare. Some experts debate whether or not the geep is a true hybrid or simply a sheep with genetic abnormalities. After all, since goats and sheep carry different numbers of chromosomes, cross-species conception is nearly impossible. If it happens, very few babies are carried to term, and even fewer survive birth.

Regardless, looking at pictures of these animals is sure to make you smile.

Like beefalo, the cama was created to produce an animal that was more economically viable than either of its parents.

Camas are hybrids of dromedary camels and llamas, typically via artificial insemination. This is the best and safest way to breed them since male dromedary camels can weigh six times more than female llamas, and the reverse pairing isn’t fruitful.

Camas don’t have camel humps and are covered in soft, fleecy fur similar to llamas’. They were bred with the intent of creating a mega-wool-producing animal that’s strong and docile enough to be used as a pack animal in desert climates.

Savannah cats may be house pets, but they’re also exotic hybrids — the result of breeding a domestic cat with a wild African serval.

Savannahs are striking animals that are around the same size as a large domestic cat. However, their tall bodies, slender forms, and spotted coats give them a wild, exotic appearance. Savannah cats with more serval blood can be twice as large as domestic cats! So anyone interested in owning one should do plenty of careful research.

Possibly the most unusual hybrid animal on this list is the green sea slug. It is a sea slug that incorporates genetic material from the algae it eats into its own DNA. The strange result is a plant-animal hybrid that can consume food like an animal or create its own nutrients via photosynthesis.

Scientists call these sea slugs “emerald green elysia.” Their ability to turn solar energy into food is what gives them their brilliant green hue.

Scientists acknowledge that they will have to do more research in order to determine how this phenomenon happens. But as of now, this is the only successful instance of gene transfer from one type of complex organism to another.

While we covered 12 hybrid animals, there are more. Others include:

The Deer Snake Hybrid: Does it Exist?

In the last year or so, a video surfaced on Tik Tok where an owner of a pet deer and pet king cobra claimed to have crossed the DNA of both animals, fertilized a set of eggs, and created a venomous deer snake hybrid animal. The video shows a deer with sharp fangs protruding from its mouth. So does a deer snake hybrid really exist?

While we have not found any clear statements made from an animal expert denying or affirming the deer snake hybrid, there is a type of deer that lacks antlers, but instead has sharp, protruding fangs. It’s called the Chinese Water Deer, sometimes called the Vampire Deer. This type of deer, which is related to a miniature musk deer, is native to China and Korea. What appears to be fangs are actually two tusks which can grow as long as 2 inches. But they certainly resemble fangs! This unique animal grows to an average of 2 feet tall and weighs from 20-31 pounds.

So is the deer snake hybrid a real animal? We think not! Probably, some social media influencer with a sense of humor concocted this story to get attention. But as far as a Vampire Deer (Chinese Water Deer) goes, they certainly do exist. But we would not classify them as hybrid animals.

From myth to reality! Some animals remain firmly in the realm of fairy tales and mythology. But fascinating hybrid animals do live among us!

Let’s take a look back at 12 fascinating hybrid animals:

Want to learn some more interesting facts and information about animals? Then read these posts: 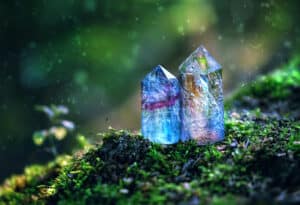 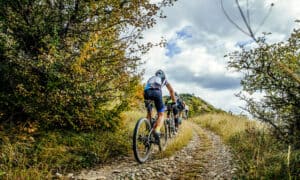