The offspring of Zebra and Donkey parents!

The Zonkey is a hybrid animal that is created by cross-breeding two different species of animal that belong to the same genetic group.

Technically though, an individual is only classed as a Zonkey if it is sired from a male Zebra and female Donkey, as one that has a male Donkey and female Zebra parents is known as a Zedonk. Like many other animal hybrids around the world including the Mule and the Liger however, the Zonkey is a sterile animal meaning that it cannot produce offspring of its own. Unlike the Liger though, it is actually quite possible for Zonkeys to live in the wild as Zebras and Donkeys are naturally found in close proximity to one another in parts of Africa. Although they are very rare, cases of wild Zonkeys have been reported but the majority of them today are found in zoos around the world and are bred as tourist attractions.

The Zebra and the Donkey are closely related to one another and both belonging to the Horse family means these two species share a number of similar characteristics including their size. The Zonkey tends to be of a similar size to these animals but takes on a more definitive Donkey-like appearance, with the obvious exception of inheriting the uniquely-striped pattern on their fur from their Zebra parent. Zonkeys are animals that tend to be either tan, brown or grey in colour with a lighter underside, and it is on the lighter parts of their body like their legs and belly where the Zonkey’s darker stripes are most prominent (they are much harder to see on the darker parts). The Zonkey also has a black mane which extends along the ridge of their back to the tip if their black tail, and a large head and ears which makes the Zonkey look much more like a Donkey than a Zebra.

Out of the three species of Zebra that are found living on the African continent, two are found in Eastern Africa whilst the other is found in more southern regions. Generally preferring to inhabit savannas and open woodlands throughout their historical range, Zebras are often found in enormous herds particularly on the Serengeti plains where they migrate thousands of miles following the rains that bring new grass. Some are also found in close proximity to Human settlements where they are known to have to compete with domestic livestock, such as Donkeys, for food. It is in these areas where Zonkeys are most likely to be produced naturally in the wild as it gives the two separate species the opportunity to mate. Sadly however, the world’s Zonkeys tend to be found in zoos and animal institutions where they are generally bred deliberately.

Despite being very similar animals both in appearance and behaviour, one of the biggest differences between the two is that unlike Donkeys which have been domesticated by Humans for thousands of years, Zebras remain to be wild animals and therefore have a naturally more aggressive nature. Along with their stripes, the other thing that Zonkeys seem to inherit from their Zebra parent is their wild streak as they too are known to be fairly aggressive towards Humans and sometimes other animals. One of the Zonkey’s most favourable characteristics is their sheer power which is made up of the stamina of the Donkey mixed with the speed and strength of the Zebra, which has led to them being used as work animals mainly to pull heavy loads.

For a Zonkey to be produced, a male Zebra must have mated with a female Donkey (if the parents are the other way round the offspring is known as a Zedonk). After a gestation period that can last for more than a year, the female Donkey gives birth to a single Zonkey foal that, like Zebra and Donkey foals is able to stand up just minutes after birth. The Zonkey foal would generally remain with its mother until it was between five and six months old when it would become independent and join another herd. This kind of behaviour however, actually happens slightly later with Zebra foals as they can take up to four years to leave the herd. Like numerous other hybrid animals, the Zonkey itself cannot produce offspring of its own, as the cross-breeding of two different species often results in their young being sterile and unable to continue a population.

Like Donkeys, Zebras, Horses and their other relatives, Zonkeys are herbivorous animals meaning that they survive on a diet that is solely comprised of plant matter. The majority of their food is made up of grasses and herbs that grow on the ground and like all equines, the Zonkey has flat, broad teeth which are the perfect tools for grinding down the fibrous grass. Along with grazing, Zonkeys also like to browse for other types of food including fruits and berries which are found growing more commonly in less arid areas. Due to the fact that Zonkeys are naturally found in the African wilderness there is always competition for both food and water from other animals inhabiting the same area and so they are always on the move in search of greener pastures.

Despite their large size and the fact that they are long-living animals, both Zebras and Donkeys (and therefore Zonkeys) are important prey to numerous carnivores throughout their natural range. Lions and Hyenas are their most common predators, along with African Hunting Dogs and large felines like Leopards and Cheetahs. Even though they remain a stable food source for these large predators, they are often hard to catch and Zebras particularly are known to protect wounded individuals to prevent them from being hurt any more. Although rarer today, one of the biggest threats to both Zebras and Donkeys in Africa has been the fact that they have been subjected to hunting for both their meat and their skins. They are also being pushed into more isolated regions of the natural habitats meaning a decrease in the likelihood of wild Zonkeys.

Although we often only think of Donkeys as being domesticated animals, wild herds of Donkeys can still be found living on the continent and in herds up to 100 strong in northern Africa, but this is an area that is not inhabited by Zebras and so the chances of a Zonkey occurring under these conditions would be extremely rare. Zonkeys have been mentioned by naturalists for centuries including Darwin who mentioned the possibility of a fertile female Zonkey that was being exhibited at the London Zoo. The Zonkey is thought to be a popular work animal as they have an apparent resistance to certain pests and diseases, something which is thought to have been inherited from their Zebra father.

Originally bred by Humans to pull heavy loads and thought to have appeared in zoos in the 19th century, the Zonkey first became really famous when one was accidentally sired in Colchester Zoo in the 1970s, and they have since continued to exhibit Zonkeys as a popular tourist attraction. Along with now being bred in zoos around the world, Zonkeys are also bred for riding and as work animals involved in transport and pulling heavy loads due to their strength and stamina. In the wild in Africa however, Zebras have come under particular threat from people due both hunting and loss of habitat for growing Human settlements or land clearance for agriculture.

Due to the fact that the Zonkey is a cross-bred animal and that it cannot continue a population, it is not listed by the IUCN. The three Zebra species though are all listed with the Plains Zebra as Least Concern, the Mountain Zebra as Vulnerable and the Grevy’s Zebra as Endangered. This means that the chances of Zonkeys occurring in the wild are becoming slimmer and slimmer, with the majority of them today found in zoos and used as work animals.

View all 7 animals that start with Z

Click through all of our Zonkey images in the gallery. 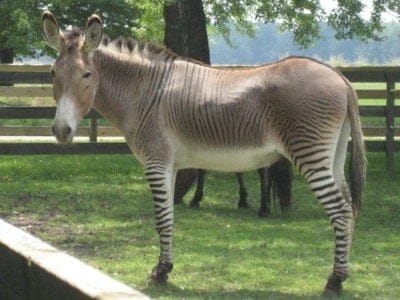 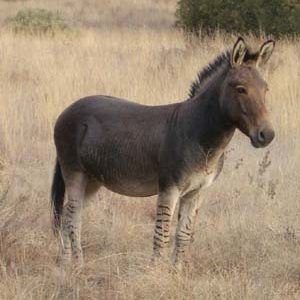 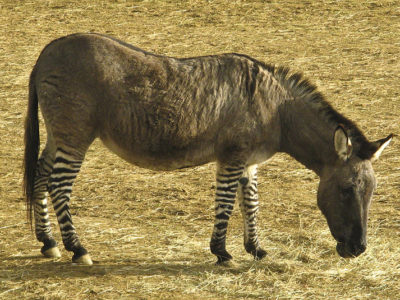 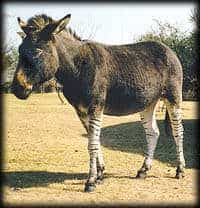 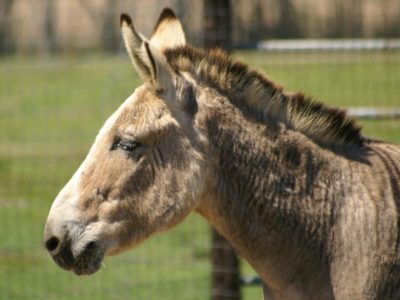 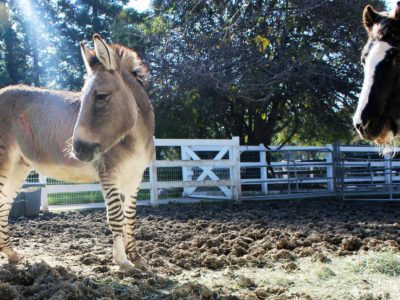 View all of the Zonkey images!

Are Zonkeys herbivores, carnivores, or omnivores?

What Kingdom do Zonkeys belong to?

Zonkeys belong to the Kingdom Animalia.

What class do Zonkeys belong to?

Zonkeys belong to the class Mammalia.

What phylum to Zonkeys belong to?

Zonkeys belong to the phylum Chordata.

What family do Zonkeys belong to?

Zonkeys belong to the family Equidae.

What order do Zonkeys belong to?

Zonkeys belong to the order Perissodactyla.

What type of covering do Zonkeys have?

Zonkeys are covered in Fur.

What genus do Zonkeys belong to?

Zonkeys belong to the genus Equus.

Where do Zonkeys live?

Zonkeys live in Africa and zoos.

In what type of habitat do Zonkeys live?

How fast is a Zonkey?

A Zonkey can travel at speeds of up to 35 miles per hour.

Why Do Birds Sing in the Morning?