Are Orchids Poisonous For Dogs or Cats?

Alexander Denisenko/Shutterstock.com
Share this post on:
More Great Content:
10 Extinct Flowers
Oak Trees in Texas
Are There Any Plants That REALLY Keep…
Daisy vs Chamomile: How to Tell These…
What Plants Keep Copperhead Snakes Away?
The World's Largest Potato Ever Grown

It’s a fascinating hobby for many plant lovers to cultivate orchids. And if you are a pet owner, you might be wondering: Are Orchids Poisonous to dogs or cats? According to the American Society for the Prevention of Cruelty to Animals (ASPCA), the phalaenopsis orchid is safe for pets. But, it’s also possible that your dog or cat will vomit or have diarrhea if he eats a piece of your orchid. Why? There’s more about that in this post. Keep reading to discover the answer!

Are Orchids Poisonous For Dogs or Cats?

Orchids, notably the Oncidium orchid and the Phalaenopsis Orchid (or Moth Orchid), are safe for dogs and cats to be around. These plants are one of the few ones that are considered non-toxic to both cats and dogs.

But note: One or more of the estimated 25,000 to 30,000 orchid species and hybrids may be harmful to pets. For instance, the Lady Slipper Orchid of the Cypripedioideae species is known to be mildly toxic to pets. Moreover, hybrids may contain a different compound that is absent in the pure breeds. So while pure orchids are not toxic to dogs or cats, the new compound in hybrids may be toxic to them.

Besides, insecticides, fertilizers, dyes with colorants, or redwood bark in the potting medium can often do more harm than the orchid itself. If your dog or cat ingests the plant that has been sprayed with any of these chemicals, your pet might get sick.

Take your pet to the vet immediately if any of these symptoms are present:

Orchid Pesticides and Fertilizers Can Harm Your Pet

The strong chemicals in pesticides and orchid fertilizers can endanger the stomach lining of dogs and cats if consumed. So, while inherently, orchids are not poisonous to dogs and cats, these chemicals are. Be on the lookout for overdoses of chemical fertilizers in some potting mixes. If your pet exhibits symptoms like fever, panting, hunching back, vomiting, or diarrhea, contact your vet.

Blue Orchid Dye A Potential Threat To Dogs And Cats

The only orchids that are truly dangerous to dogs or cats are the tinted orchids. Blue orchids, often found in supermarkets, are certainly eye-catching, but they are not natural. These are dyed Phalaenopsis orchids. The flowers will be light blue if the buds weren’t fully open when the dye was injected. The blue will be dark and captivating if the petals fully unfold. Either way, the dye used on orchids can hurt your dog or cat. While some orchid producers label their orchids as “pet friendly,” they never disclose what is in the coloring.

Orchid Potting Mix May Be Harmful To Your Dog Or Cat

Orchids typically use a safe potting mix, but many houseplants don’t. Houseplant potting soil contains many fungi and bacteria. These fungi can harm the lungs of you or your pets when potting plants. If you’re not sure, look at your potting mix for materials like peat moss, vermiculite, fir bark, tree fern, and perlite (Styrofoam). These are usually the main ingredients and are generally safe for pets to be around. However, although perlite is not poisonous, it can cause choking in puppies or kittens.

Redwood is another ingredient to watch out for in orchid potting mixes. Redwood is a typical potting mix that has been connected to rashes in people and dogs. Also, the tiny dust from the orchid potting mix can also induce respiratory and ocular problems. It is good for orchids because it reduces pH and regulates moisture. It was also thought to help deter pests and insects from thriving in an orchid planter. Although redwood is known to be potentially hazardous, it is still used in some mixes as bark or pieces.

Even though dogs and cats aren’t poisoned by orchids, it’s best not to let them around them. A pesticide may have been used on your orchids, and a dog or cat will normally vomit up everything it eats, including plant matter. To add insult to injury, these beautiful flowers can last for months and are pricey; why let a determined pet ruin its beauty when it can be kept safely out of reach. If you ever suspect that your pet ingested a toxic substance, remember to contact a vet immediately! 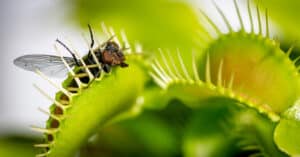