The word “cute” probably doesn’t come to mind when you think of a baby rat. Truth be told, newborn baby rats are not the most adorable things in the world. However, these rodents are extraordinary creatures that we can learn much about.

Keep reading to learn five awesome facts about baby rats and to check out some seriously cute kit pictures!

A baby rat is called a pup! Pups and kittens probably remind you of cats and dogs. But did you know that rats are also referred to by these names when they are babies? These tiny rodents also share their name with animals such as otters, skunks, and even foxes.

#2: There are No Baby Rats in Alberta

Rat pups are extremely hardy creatures. They can survive in pretty unfavorable conditions, which means they live nearly everywhere that humans do. However, there is one exception: there are no rats in Alberta, Canada. In 1950, the province passed a program to completely eradicate tiny rodents.

It might be hard to believe that an entire province in Canada was able to completely eradicate rat populations. However, it’s really true! However, the road to the rat-free territory has not been an easy one. Each time a rat sighting happens, it is promptly reported to local government officials and swiftly handled.

In case you thought government pest control alone was enough to keep rats at bay, think again. They go to extreme lengths to maintain its title as a rat-free area. It is illegal to own any pet rat in Alberta, which further ensures that the province stays free of rats.

Rats are known for their short, sometimes multi-colored fur, pink tails, and tiny feet. But as newborns, they look much different than you might think.

At birth, rat pups are completely bald. Though their tails are present, they are light pink and extremely short. Their heads are disproportionately larger than their bodies and their eyes are sealed shut. They are so small that they can comfortably fit within a teaspoon.

Rats are born in litters of around three to twenty babies, with an average number of four to eight being typical. Since they are born naked, it is not abnormal to see the rat siblings huddling together for warmth for the first few weeks of their lives. Rats are extremely social animals and love to play with their littermates – they can even play fight!

Rat kittens will begin to grow hair at around one week old. At this time, their body also changes from a pale white to a pink color, which makes them more recognizable. Their eyes open at around two weeks old, but their eyelids are extremely thin, so they will already be used to seeing changes in light.

The sheer number of baby rats that a single female rat can produce is astounding. On average, mother rats can have up to 12 litters in a single year. With an average litter size of around six up to a maximum of 20, that means that one female can birth anywhere from 72 to 240 babies a year.

A major reason why rat populations grow so quickly is due to the sexual maturity age of the animals. A rat pup can start having her babies once she is a measly five weeks old. That means that if a mother rat had an average of 6 babies and they were all female, there could be somewhere around 36 more rat kits within about 8 weeks. A rat’s gestation period is only 21-23 days long.

Rats are most likely to mate and have babies in their young and healthy years. As they grow older and weaker, female rats will mate less and have fewer babies. However, by the time a female rat is old enough to slow down on mating, she will have already had literally thousands of babies. Sounds like a lot of responsibility, huh?

#5: Rat Kits are Not Filthy Animals

Baby rats unfortunately get a bad rap for being filthy animals, when that’s truly not the case. Since they have been typecast as the type of animals that forage through dirty trashcans and live in sewers, many people believe they are inherently dirty as well.

The truth is that rat kits and adult rats are incredibly clean animals. They prefer to keep their nests extremely tidy and take time several times a day to groom themselves. When it comes to pet rats, their hygiene is highly comparable to that of a pet dog or cat.

What is a baby animal called?

A baby rat is called a kit or a pup. A group of baby rats is called a litter or a mischief. They are not the only animals in the world that are called that, either. They also share this baby title with cats, dogs, and even foxes!

How big are baby rats?

Newborn baby rats are extraordinarily tiny. They can comfortably fit inside a single teaspoon.

What do baby rats eat?

Rat kits only need their mother’s milk to survive for the first three weeks of their lives. After that, they enjoy a diet of insects, earthworms, fruits, vegetables, and grains.

Where do baby rats live?

Baby rats live everywhere that humans do, except Alberta, Canada. 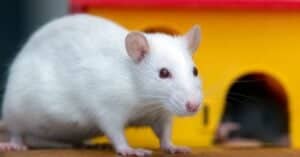 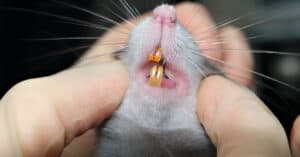 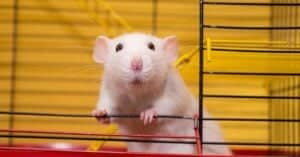