Sea lions… Many people think these adorable creatures are sweet, affectionate, loving animals. The truth is, they can be quite savage and one man’s viral video shows just what a sea lion will do when hunger strikes!

A new reality show called Chef On The Water was being filmed in Mexico by Mike “The Griz” Ritz and Chef Yvan Mucharrz from Capella Pedregal. During filming in Cabo San Lucas, Mexico, the two showed off a giant catch that made for great television. Little did they know, what happened next would be even better!

A local sea lion called Pancho decided he wanted an easy dinner. As The Griz and Chef Mucharrz pose for the camera with huge fish in their hands, Pancho sneaks up behind them and steals one right out of the Chef’s grasp! Thankfully, the pair took the loss with a grain of salt and laughed it off.

Sea lions have aerodynamic bodies that are nearly torpedo-like in shape, which makes it easy for them to move quickly through the water. They can swim up to 18 mph, so they can effortlessly grab even the swiftest prey. Additionally, they have a substantial coating of blubber on their body that helps keep them warm in the chilly water. These animals wouldn’t be able to stay in the water as long without this insulation, which would make it more difficult for them to catch adequate food.

In the slow-motion shot of the clip, you can see a pelican on the boardwalk behind the chaos, and looks as if he wants to say, “I was going to do that!” Pancho is a quick seal and is off with a tasty meal in the blink of an eye!

A comment under the video from user Bob3519 says, “Even though the guys could have made a cuss fest and thrown a fit about the theft, they kept their cool and kept it in perspective. Thanks, guys, for making lemonade from lemons and sharing the humor in this situation.”

It’s safe to say The Griz’s catch was large enough to feed a plethora of people. We’re glad the pair took the sea lion’s theft lightly and now it makes for a hilarious video. Check it out below along with other fun blogs and videos of animals you might like! 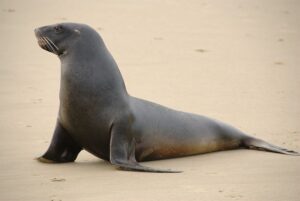 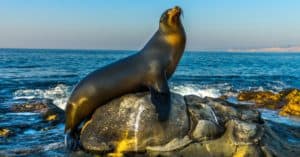 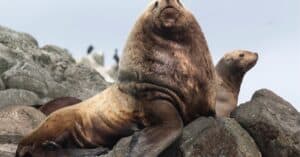 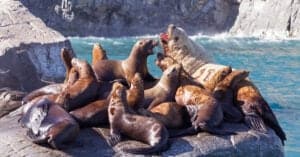 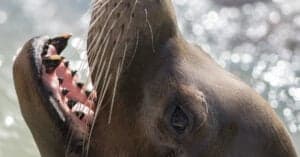 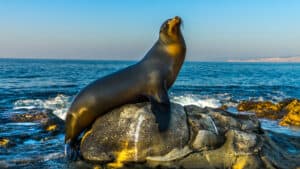 These Sea Lions Ride Waves Better Than Most Surfers