Written by Kyle Glatz
Updated: December 23, 2022
© iStock.com/emranashraf
Share this post on:
More Great Content:
The Absolute Best Camping Near Salt Lake…
The 10 Countries With Stars On Their…
12 Natural Home Remedies and Products For…
Discover The Highest Wind Speed Ever Recorded…
What's the Largest Planet in Our Solar…
Meet The Holy Grail of Ice Age…
↓ Continue Reading To See This Amazing Video

Bald eagles are known for powerful, fast attacks that overwhelm their prey before they have a chance to fight back. They are not the largest, deadliest eagles, but they are known for taking snakes as prey. That doesn’t mean they can kill any snake in the world, though. Today, we’re going to look at what would happen in an epic bout between a king cobra vs. a bald eagle.

We’ll break down the strengths and weaknesses of these two animals and show you exactly what would happen if this regal bird and deadly snake battled.

Comparing a King Cobra and a Bald Eagle

What Are the Key Differences Between a King Cobra and a Bald Eagle?

The most significant differences between a king cobra and a bald eagle can be found in their bodies and attacking methods. King cobras are the largest venomous snakes alive today with long, scaly bodies. They kill their prey by injecting them with venom, waiting for them to die, and swallowing them whole.

Meanwhile, bald eagles are raptors that typically hunt fish by performing a high-speed diving maneuver that allows them to dig their talons into prey and tear them to pieces in a sudden, deadly attack.

These differences will greatly impact a fight. However, these are not the only factors that will make a difference here. We’ll need more data before crowning one of these animals the winner.

King Cobras can be found in different areas of Southeast Asia, such as India, China and other countries in that area of the continent. They live in plains and rainforests.

Bald Eagles, on the other hand, live throughout the continent of North America. They are notably the national bird of the United States and a symbol of freedom.

What Are the 5 Key Factors in a Fight Between a King Cobra and a Bald Eagle?

The most significant factors in a battle between a king cobra and a bald eagle can be found in their size, speed, and offensive capabilities. To figure out which animal has the higher chance of emerging victorious, we’ll need to explore each of those elements. Yet, we also have to examine other related data as well, like defenses and how each animal initiates combat.

We’re going to examine five key factors in this fight, show which creature has the advantage, and then use that information to conclude whether the bald eagle or king cobra will win the battle.

King cobras are larger than bald eagles. The average bald eagle weighs between 6 and 14 pounds, grows 3.3 feet in body length, and has a wingspan that measures up to 7.5 feet. They can grow between 10 and 19 feet long. Additionally, they can weigh between 10 and 15 pounds. This weight range is important because bald eagles can only fly away with something that weighs about 5 to 6 pounds on average.

King cobras have the size advantage in this fight.

Bald eagles are much faster than king cobras when attacking. Bald eagles average about 30 mph when flying fast, but their diving speed is faster. When diving to attack prey, like fish, they can reach speeds of 100 mph. They can strike their prey before the animal knows what’s happening.

King cobras only move at speeds of about 5 mph over short distances. They’re not known for their speed. Yet, the speed of their strike is impressive, and they can successfully land bites on especially agile creatures like the mongoose.

Bald eagles have the speed advantage in this fight.

The king cobra and bald eagle have limited defenses. Neither of these animals are armored beings that can withstand a lot of punishment. Instead, the king cobra can squeeze into small places or hide in tall grass. Meanwhile, bald eagles can use their incredible senses to spot danger from afar and flee the area by taking to the skies.

Yet, neither animal has enough defenses to negate an attack from the other creature. So, whoever scores the first blow will have a better chance of winning.

The king cobra and bald eagle are tied for their defenses.

Bald eagles attack their prey from the air. They’ll dive at their prey and dig into them by using their 2-inch-long talons. They dig into their prey and hold it still while their beak tears into the animal’s body. Their beaks measure about 3 inches in total length and they’re capable of tearing flesh with ease.

The attack often cuts into small animals’ organs while the eagle bites the animal’s head. The bald eagle has very powerful feet, and it can lift a 6-pound animal off the ground and fly away with it.

Meanwhile, king cobras use their powerful neurotoxic venom to kill their foes. They can inject anywhere from 500 mg to 1,000 mg into their prey, causing them to go into respiratory failure. These snakes can lift upwards of one-third of their bodies off the ground, giving them the reach advantage over other animals when fighting on the ground. Incredibly, a single bite from this snake has enough venom to kill 11 humans.

Both animals have incredibly powerful offensive capabilities, but only the bald eagle can kill instantly.

Both the bald eagle and the king cobra are ambush predators. That means they wait for the opportune moment to kill their prey and attack with stealth. King cobras will wait in tall vegetation or in crevices to strike. Meanwhile, bald eagles attack from the air.

King cobras only need to land a single bite to put down prey, but their venom takes time to work. In contrast, the bald eagle can kill in mere seconds.

Who Would Win in a Fight Between a King Cobra and a Bald Eagle?

A bald eagle would win a fight against a king cobra. Bald eagles are used to killing snakes. While the king cobra is too large for the bald eagle to snatch up in its talons and fly away with, it can still land a devastating, oft-fatal attack from the air before the king cobra can respond.

If the bald eagle spotted the king cobra slithering through grass or down a dirt path, all it would have to do is divebomb the large snake and aim for its head. The last place a king cobra would look is above, and that’s where an eagle attack comes from. The bald eagle could then drive the bird’s talons into the snake’s vital areas and tear into its head.

Of course, if this attack was unsuccessful, the eagle would be in trouble. Likewise, if the eagle tried to carry the snake off, the king cobra could always retaliate and bite. If the bald eagle failed to secure the kill outright, it would probably leave after testing the snake’s speed and agility.

In contrast, the chances of the king cobra attacking a bald eagle from stealth are very small. Aside from the fact that the animals don’t share a habitat, king cobras don’t slither quite as high as bald eagles build their nests.

Thus, in this particular fight, the odds seem to favor the bald eagle landing a killing blow from above more than they favor the surprised king cobra turning the tables on its aggressor. 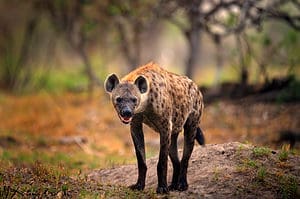