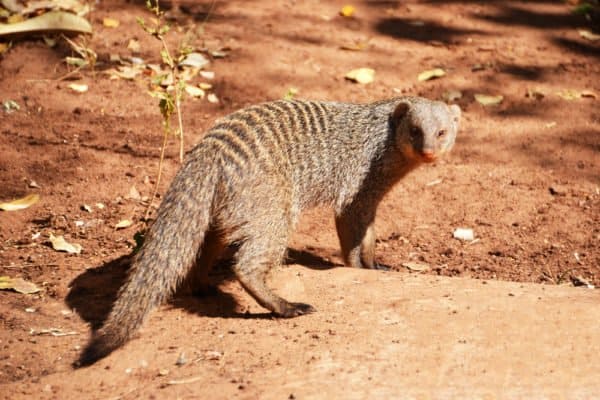 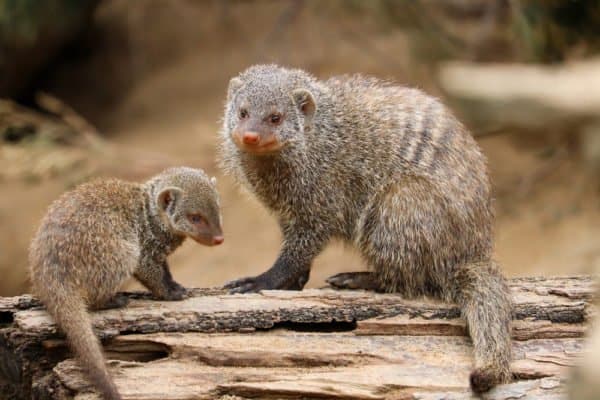 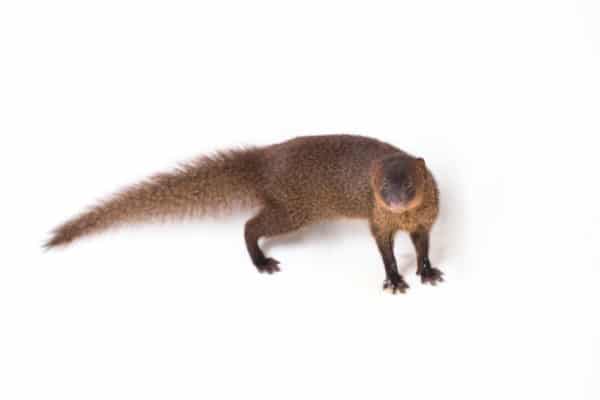 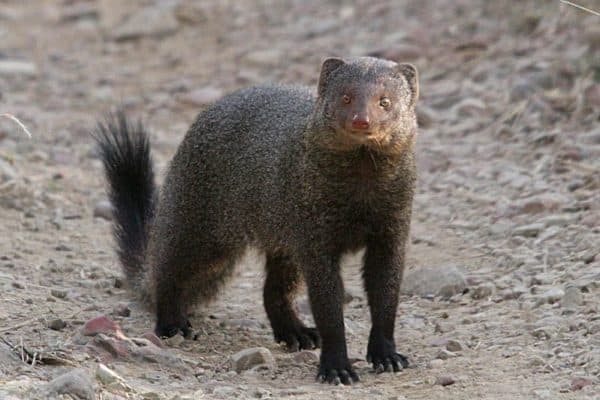 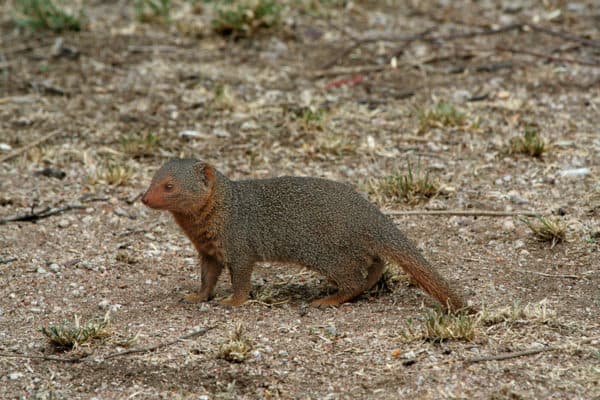 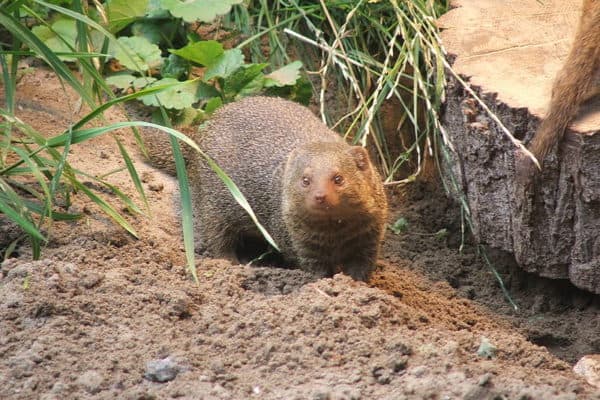 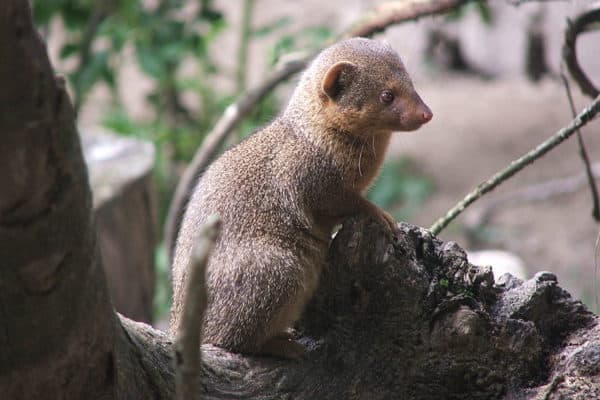 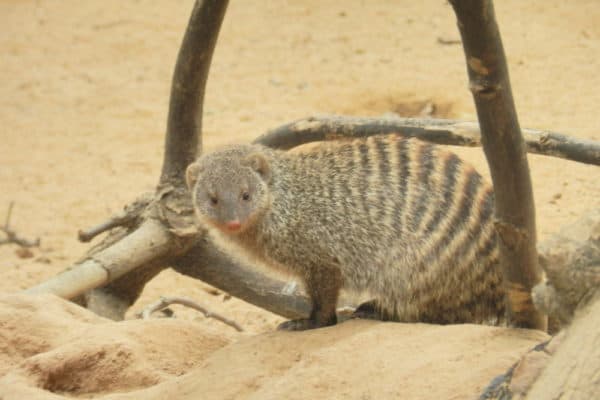 Fast and agile, the mongoose is an adept hunter that will feed on almost anything it can catch.

The mongoose is a small, sleek creature (similar in appearance to a weasel) that roams the forests and plains of Asia and Africa. Because of its rather bold temperament, the mongoose has been the subject of human myths and stories for thousands of years. However, the life of a mongoose is far more complex and interesting than these myths suggest.

Mongoose is the colloquial, or common, term for a group of similar species that belong exclusively to the family of Herpestidae. The scientific name derives from a Greek word for an animal that walks or creeps on all four feet. Mongooses occupy the same order — Carnivora — as cats, bears, dogs, seals, and raccoons. They are the most closely related to viverrids such as civets, genets, and linsangs. They are somewhat more distantly related to the hyena. The mongoose is an example of a feliformia, or a cat-like carnivore.

It is believed that at some point early in its evolution, these animals split into two different subfamilies: the Herpestinae and Mungotinae. A third subfamily called Galidiinae was once classified with the other two. Endemic to Madagascar, Galidiinae was sometimes known as the Malagasy mongoose for its similar appearance. However, this subfamily is now classified in the family Eupleridae instead of Herpestidae.

There are around 34 mongoose species still living. This includes 23 species of Herpestinae and 11 species of Mungotinae. A few extinct species are also known from the fossil record. Mongoose species are unevenly distributed across the entire family. Some genera only have a single species in them. The genus Herpestes, however, has approximately 10 living species, including the well-known Indian grey -, the Egyptian -, and the crab-eating mongoose.

These animals typically is a slender creature with an elongated body, short legs, thin snout, and small rounded ears. Coat color is almost always brown, gray, or even yellow, sometimes interspersed with markings or stripes. The tail may also have a unique ring pattern or coloring on it. Because of its appearance, some people mistake them for a weasel, even though their traditional range rarely overlaps.

The mongoose varies in size from one species to another. The body of this animal can range anywhere from seven inches on average for the diminutive dwarf mongoose to 25 inches on average for the massive Egyptian mongoose, while the tail adds another six to 21 inches. This makes the typical animal about the size of a house cat. The largest species can also weigh up to 11 pounds when fully grown.

Smell is an important part of mongoose communication. This is facilitated by the presence of large scent glands near the anus that they use to signal for mates and mark their territory. In fact, the scent gland is the primary characteristic that separates these animals from the civets, genets, and linsangs. Mongooses (the correct plural of mongoose) also rely on vocalizations to signal for threats, begin courtship, and convey other critical information to other members. They have an impressive range of sounds to communicate with each other, including cries, growls, and giggling. Each sound is accompanied by a different set of behavior.

The Herpestidae family in general exhibits a wide array of social structures and behavior. While some species thrive in solitude or small clusters, other species live in colonies of up to 50 individuals. The well-known meerkat, for instance, (which was made famous by a TV show) lives in large cooperative bands with a distinct social hierarchy. Individuals are sometimes responsible for specialized tasks such as guard duty, hunting, and child protection. The colony lives or dies based on the actions of each individual member.

The particular social arrangement of a species may be related to its physical size and type of animal. The larger and more physically intimidating Egyptian mongoose is a lone hunter, while the smaller dwarf mongoose is a more social creature that staves off predators by clustering together into large groups. Alone, an individual is vulnerable. But even smaller animals can be difficult to kill when it is part of a pack.

The mongoose’s small size conceals its rather bold disposition. The creature is able to hold its ground against dangerous predators much larger or more aggressive than itself. Being able to kill snakes (even venomous species!) is only one example. These animals can also sometimes evade or bamboozle deadly predators with its impressive speed and agility. Some species can run at an average of 20 mph.

These animals are most active during the day while they hunt and socialize. They tend to spend the night in their dens asleep. Mongooses can be quite intelligent and playful, especially in social settings.

The mongoose is an old world animal that thrives largely in hot or tropical areas. The largest populations can be found across sub-Saharan and Eastern Africa, including most species of Mungotinae and some species of Herpestinae. They are also fairly common throughout a long stretch of territory in southern Asia, from China to the Middle East. Other common locations include southern Iberia, Indonesia, and Borneo.

These are largely terrestrial mammals that roam the ground. They reside in a variety of different climates and habitats, including tropical forests, deserts, savannas, and grasslands. However, there are a few notable exceptions. Some species such as the crab-eating mongoose are semi-aquatic and spend a good deal of their lives in and around the water. They are quite adept at swimming with webs between their digits. Other species inhabit the trees, moving effortlessly between branches. The terrestrial mongooses, on the other hand, burrow into the ground with their big non-retractable claws. They spend much of their time within the complex system of tunnels they have created.

These animals are opportunistic carnivores that will feed on a huge variety of different foods, whether living or dead. These may include reptiles, small birds and mammals, amphibians, insects, worms, and crabs. However, some species will supplement their diets with fruits, vegetables, roots, nuts, and seeds. If the opportunity presents itself, then the animal will steal or feed on another creature’s kill.

A clever animal, mongooses have learned the ability to smash shells, nuts, or eggs against rocks to crack them open. It can pound the object directly against a hard surface or throw the object from a distance. This tactic is passed from one generation to another, which may represent a form of transmissible culture.

The mongoose’s diverse palate can be a problem for other species, however, and they are considered an invasive species in some areas.

The mongoose has only a few natural predators in the wild such as hawks and big cats. Larger mongooses can ward off predators through sheer physical size, but smaller species in particular are vulnerable to predation from large carnivores. The mongoose is also sometimes threatened by venomous snakes, but thanks to its agility and speed, the mongoose is more than a match for the fearsome reptile. Its sheer adaptability has enabled it to thrive across many different geographical regions around Asia and Africa. However, some types of mongooses are currently declining due to habitat loss from human encroachment. They require ample space for burrows and social arrangements.

In the 19th and 20th centuries, human settlers introduced mongooses around the globe — particularly to several oceanic islands such as Hawaii — to help with pest control on plantations and farms. Although mongooses rarely succeeded in this task, it did have the unintended consequence of driving much of the local wildlife — including many unique bird species — to the brink of extinction. For this reason, mongooses are considered to be one of the top invasive species in the world, and some efforts have been made to cull or limit mongoose populations in non-indigenous areas.

Mongoose reproduction varies widely between species, since it is often a reflection of their social structure. Solitary mongooses only meet up at regular intervals to reproduce, usually once a year. One or both parents may raise the young pups. Large colonies, on the other hand, tend to have a dominant member of the pack with almost exclusive breeding rights to several females — or sometimes there is a single male-female dominant pair.

Once mating is completed, the female will give birth a few months after conception. She can give birth to a litter of anywhere between one and six pups at a time. The mongoose pups tend to grow up relatively quickly. After they are weaned, the pups will remain dependent on the parent(s) for another several months. It can take between six months and two years for a pup to become fully mature.

Among more social mongoose species, pups are introduced into the colony from an early age. When foraging, several members will stay behind to protect the young. In some colonies, a pup will choose a specific adult to provide regular sustenance and attention. Individuals may even form lifelong bonds with family and/or fellow members of the colony or pack.

Lifespan depends greatly on the species, but a typical mongoose can live around 10 years in the wild and perhaps twice that in captivity.

Although precise population numbers are difficult to estimate, many Mongoose species across the globe appear to be in robust health. The Indian grey mongoose is perhaps the most widespread species. It is commonly found throughout the Indian subcontinent and southern Iran in a single unbroken range.

According to the International Union for the Conservation of Nature (IUCN) Red List of threatened species, the Liberian mongoose is the only species that qualifies for vulnerable status, while several other types of mongoose are near threatened. However, the Malagasy mongoose, though not a true mongoose, is under threat in its native habitat, since several species have fallen to endangered status. Habitat loss will need to be halted or reversed for some species to rebound again to their former levels.

What is the plural of mongoose?

The plural form of mongoose is simply mongooses, not mongeese as it’s sometimes assumed to be.

Are Mongooses carnivores, herbivores, or omnivores?

While certain types of mongoose will supplement their diet with vegetation, such as nuts or fruit, mongooses are generally carnivorous creatures who will eat a range of other animals – including birds, reptiles, insects, crabs, and even small mammals.

Mongooses are not a direct threat to humans, but they may fight back if threatened or startled. For this reason, wild mongooses should be approached with caution.

Can a mongoose be kept as a pet?

Although mongooses exhibit compassion and intelligence (they can even be taught to do tricks), they often make for poor pets. Unless socialized from an early age, they are completely unsuitable for a domestic setting and may exhibit destructive behavior. Due to national laws and the challenge of rearing them, it would be difficult to even obtain one. Many countries also prevent people from importing them from elsewhere in the world. Therefore, it’s very rare for people to keep a mongoose as a pet and not recommended.

However, they were believed to be a common pet in ancient Egypt, with some tomb drawings showing mongooses on leashes. Mummified mongooses were also found in tombs with their owners, since it was common to bury pets for company in the afterlife.

How did mongooses evolve?

Mongoose evolution is not well understood, but based on genetic evidence, the taxonomical family may have first evolved at least 20 million years ago. Some fossils found in the Siwalik formations of Pakistan may date back up to 10 million years.