Bald eagles have 20/5 vision, which is much sharper than a human's 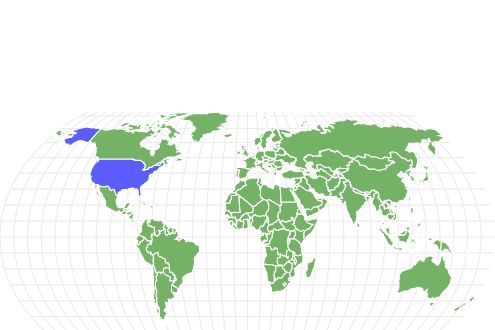 View all of our Bald Eagle pictures in the gallery.

View all of the Bald Eagle images!

An endearing symbol of strength and power, the bald eagle is one of the most popular animals in all of North America. It soars majestically in the air, enthralling bird watchers and enthusiasts alike. While it was once on the brink of extinction, today it has recovered sufficiently to represent an astonishing conservation success story. This article will cover some fascinating facts about the appearance, behavior, and life history of the bald eagle.

Where to Find the Bald Eagle

The bald eagle is the only member of the sea eagle genus to live exclusively in North America. There have been sightings as far south as Belize and Bermuda and as far north as the Arctic. The most common habitats are mature forests with a large source of water nearby.

The bald eagle pair prefers to construct its nest in the canopy of tall trees. If that isn’t available, then it may choose a cliff face, an artificial structure, or the ground. Sticks are woven together and lined with lichen or moss to construct the nest. Measuring some five to six feet in diameter, it is perhaps the largest nest of any American bird.

The scientific name of the bald eagle is Haliaeetus leucocephalus. Haliaeetus is the Greek term for the sea eagle, while leucocephalus is the combination of two words: leukos, meaning white, and kephale, meaning head. This species is closely related to the African fish eagle, white-tailed eagle, and Steller’s sea eagle.

The identification of this American bird is a relatively simple matter. Measuring about 28 to 38 inches tall from head to tail, it easily ranks among the largest birds in all of North America. When its wings are outstretched as it soars gracefully in the sky, the bald eagle can sometimes reach more than seven feet from one tip to the other. Most of the body is covered in dark brown plumage, but the head and tail feathers are both covered in white feathers. They also have strong yellow talons and sharp beaks, specialized for killing prey. It’s estimated that the female is about 25% larger than the male on average, but otherwise, both sexes look the exact same, which makes identification very difficult unless they’re standing side by side.

Bald eagles are extremely strong fliers that seem to glide effortlessly above the ground on thermal currents and strong updrafts for miles in all directions. While they mostly hunt and sleep alone in the non-breeding season, bald eagles do form strong pair bonds with each other to raise a new brood every year; they communicate through a series of high-pitched chirps, whistles, and chattering sounds. When nesting sites are particularly scarce, bald eagles may start dangerous or deadly fights with each other to challenge the territory.

Northern populations from Canada and the upper United States tend to migrate south for the winter. Some eagles may only travel a few miles for better foraging opportunities, while others may travel hundreds of miles to escape the cold.

The bald eagle is a carnivorous bird. The diet consists entirely of meat.

What does the bald eagle eat?

As an opportunist predator, the bald eager feasts on a diet of fish, waterfowl, and small mammals. It sits on a high perch or glides in the air searching for prey on the ground or water below with its exceptional eyesight. When it spots something, it will dive down and grasp the prey in its talons.

Bald eagles have been long threatened by hunting, trapping, accidents, and dangerous chemicals. Throughout the course of the 20th century, they were nearly driven to extinction by pesticide use, which made adults infertile and thinned out their eggshells. The banning of the pesticide DDT in 1972 and the hard work of conservationists have led to a revival in the fortunes of the bald eagle. It is currently listed as a species of least concern by the IUCN Red List.

What eats the bald eagle?

An adult bald eagle does not have any natural predators in the wild. However, the chicks are preyed upon by bobcats, wolverines, black bears, foxes, raccoons, and large birds.

The bald eagle is believed to form lifelong monogamous pairs that last until one partner dies. They reinforce their bond with extravagant courtship displays in which they lock their feet together while spinning toward the ground. They will also swoop down at each other in the air. The mating pair produces only a single brood of one to three eggs per year. The timing of the reproductive season often occurs from the late winter to early spring. Both parents take turns incubating the egg, while the other one hunts for food.

It takes an average of 35 days for the chicks to emerge from their eggs sporting a brownish-gray head and tail mottled with white. In the eight to 14 weeks it takes them to gain their full flight feathers, the juveniles spend a lot of time playing with each other, stretching their wings, and grasping objects with their talons for practice. They are among the fastest-growing birds in North America, but it still takes some five years for the juveniles to reach full maturity and gain their adult plumage. Since they look so radically different from the adults, it can make identification of the juvenile a little tricky. The typical lifespan of a bald eagle in the wild is 15 to 20 years, but one bird lived up to 47 years in captivity.

The bald eagle use to be among the most persecuted and endangered birds in all of North America. Numbers fell to a low of only a few hundred breeding pairs by the middle of the 20th century. Today numbers have rebounded to 250,000 breeding pairs, about 88% of them occurring in the United States alone.

Does the bald eagle migrate?

How many eggs does the bald eagle lay?

The mother lays one to three eggs per year, but most chicks don’t survive long enough to reach adulthood.

How fast does the bald eagle fly?

What is the bald eagle’s wingspan?

The size of the eagle’s wingspan is normally between 70 and 90 inches long.

Where does a bald eagle live?

How big is a bald eagle?

The bald eagle is about the same size as a lamp.

How much does a bald eagle weigh?

The average weight is nearly 10 pounds.

How tall is a bald eagle?

The size of the species is about 28 to 38 inches long from head to tail.

Few other birds of prey have a distinctive all-white head. The closest species in terms of overall shape and size is probably the golden eagle.