Written by August Buck
Published: March 31, 2022
© iStock.com/Prystai
Share this post on:
More Great Content:
Dogs With The Highest Bite Force
This Prankster Coyote Wasn’t Ready for a…
The 10 Most Dangerous Dog Breeds in…
Belgian Shepherd vs German Shepherd: 5 Key…
The Top 8 Oldest Dogs Ever
American Bully Vs American Bulldog: Is There…

While they may look similar upon first glance, there are many differences between the Irish Setter vs golden retriever. Both of these dog breeds are extremely popular for a variety of different reasons, but what separates them from one another and what makes them unique?

In this article, we will compare and contrast all of the differences between golden retrievers and Irish Setters so that you can learn to tell them apart. We will also discuss their behavioral differences as well as why these dogs were originally bred in the first place. Let’s get started and learn all about these two dog breeds now!

Both of these dogs are large dog breeds, but there are some vague differences in size between them. For example, golden retrievers weigh more than Irish Setters, but they are shorter in height and stature. This likely means that golden retrievers are not as slender compared to Irish Setters. Let’s go over these figures in more detail now.

While it may take a moment to determine the differences in physical appearance of the Irish Setter and golden retriever, you can tell a few things right off the bat. For example, golden retrievers honor their namesake and only come in yellow, cream, and red shades, while Irish Setters are notoriously red or rusty brown in appearance.

The original reason for the breeding of Irish Setters and golden retrievers is strikingly similar. Both of these dog breeds are hunting and gun dogs, though the golden retriever has an emphasis on waterfowl retrieval, while Irish Setters utilize their unique and powerful sense of smell to hunt other creatures.

Nowadays, golden retrievers are laid-back and comfortable family companions, while Irish Setters are more often used for hunting, even to this day. Both dog breeds work well as companions for a variety of family units, though they will also both need ample exercise, especially when you consider their hunting dog backgrounds.

The final difference between Irish Setters and golden retrievers has to do with their life spans. Irish Setters live longer than golden retrievers on average, especially since recent studies have shown that Golden Retriever lifespan is on the decline. However, both dog breeds are capable of living long and happy lives depending on their level of care in the home.

Irish Setters live an average of 12 to 15 years, while golden retrievers live anywhere from 10 to 12 years. Of course, this ultimately depends on the exercise and dietary routines that these dogs have in their homes, as well as healthy breeding practices. 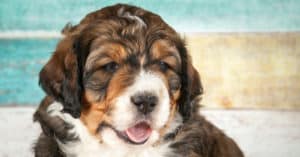