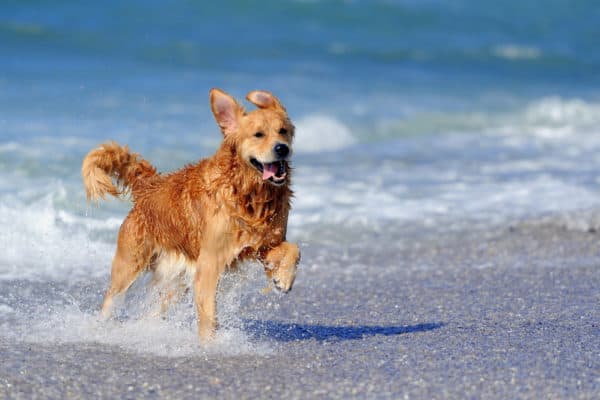 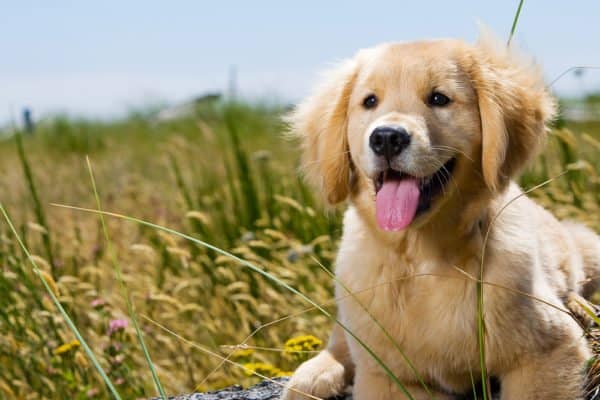 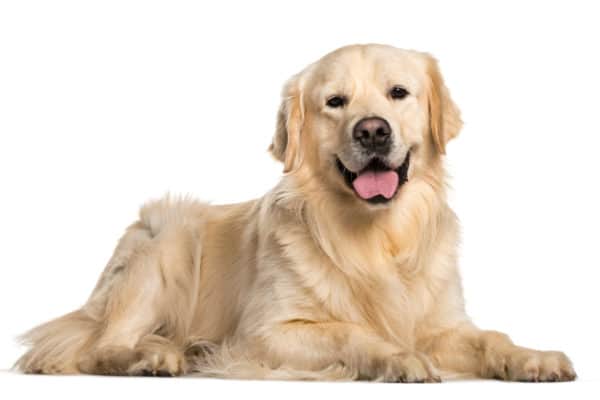 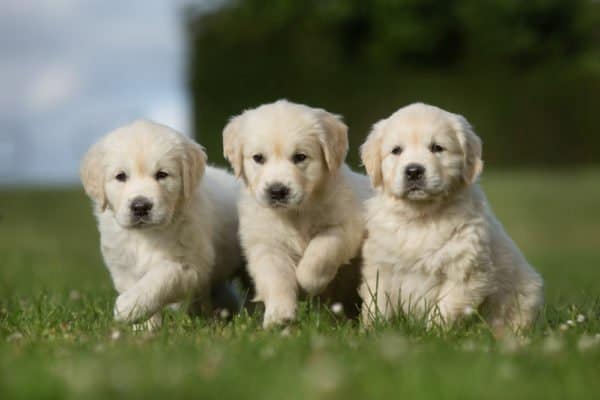 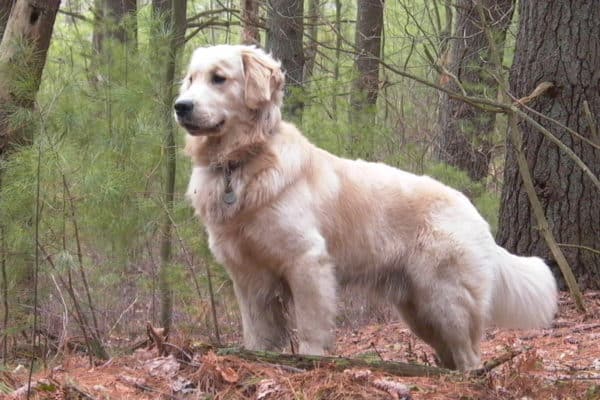 Originating from the serene and picturesque hills of the Scottish Highlands, the golden retriever is the very epitome of loyalty and affection.

The first major breeder was Dudley Marjoribanks, the Baron of Tweedmouth, who created the golden retriever in the 19th century by crossing a yellow retriever with the now-extinct tweed water spaniel, plus a mix of the bloodhound and Irish Setter. He intended for the breed to be a superior hunting dog which could retrieve dead game from all kinds of rugged terrain on land or water. The technical term for this type of retriever or hunter is a gundog. Its distinguishing quality is the impeccable and lustrous double coat of orange, golden, or light-colored fur. According to the American Kennel Club, it is one of the most popular breeds in the country.

The pure breed golden retriever, as opposed to a mix, is a medium-to large-sized dog with a strong and muscular frame. The typical member of this breed stands up to 2 feet high and weighs between 55 and 75 pounds. Males are slightly larger than females, but otherwise they are similar in appearance. Due to the exact breeding standards, the golden retriever adheres to a very narrow range of sizes. Here are the basic facts:

Due to various genetic factors, the golden retriever unfortunately comes with a number of health problems, the most significant of which is cancer. As perhaps the most cancer-prone dog breed in the world, more than 60% of golden retrievers may eventually die from it.

The breed is also susceptible to eye disease, skin diseases, ear infections, hypothyroidism (low levels of thyroid hormones), heart disease, and hip and elbow dysplasia (a genetic developmental abnormality in which parts of the joint grow somewhat out of alignment with each other, potentially hobbling the dog). If you intend to purchase a golden retriever, then you should be aware of the common signs of distress or illness. For instance, infections and skin allergies, which can be caused by pollens, food, and fleas, generally appear as red skin and excessive itching. For dysplasia, you may notice a limp.

To reduce the possibility of long term health problems, you can request medical records from the breeder, store, or adoption agency from which you purchase the dog. You should also ensure that your dog has an annual checkup to catch health problem as soon as possible. Altogether, you should be aware of the following common problems: 1. Cancer 2. Joint Dysplasia 3. Skin Diseases 4. Heart Disease

Golden retrievers seem to positively radiate a friendly, trusting, affable personality with their warm and cheerful expressions. For this reason, they are sometimes held up as an example of the quintessential dog breed. Their keen intelligence and playful behavior make them very easy for all kinds of people to interact with, as they are always looking for ways to please people and meet new friends.

This has allowed them to thrive as good companions and hunting dogs but perhaps not so much as guard dogs. In modern society, this devoted and exuberant personality makes them well-suited for rescue work, therapy, some law enforcement work, and guides for the blind.

How to Take Care of a Golden Retriever

Because of their frequent need for exercise and grooming, golden retrievers require a large amount of work and effort to maintain. It is a good idea to ensure that there’s a constant human presence in the house to keep the dog company and take care of its needs. If the dog begins to show early signs of health problems such as dysplasia, then you should take it to a veterinarian as soon as possible.

Golden retrievers require high-quality food for medium or large dogs to support an active lifestyle. You can also feed the dog treats judiciously from time to time, but don’t overdo it. Because of the tendency to overeat, golden retrievers are sometimes prone to obesity. Hypothyroidism is a particularly worrying accelerator of weight gain. This can lead to long term health problems, including heart disease and arthritis.

A-Z-animals recommends Royal Canin Golden Retriever specific dog food for this breed. You can order some for your pet here.

With its rich coat of fur, the golden retriever is notorious for its semi-frequent shedding. You should therefore endeavor to groom the dog at least once per week, maybe more. In addition, when the dog is heavily shedding its double coat about once or twice a year, it may require almost daily brushes to stay clean and healthy.

The best way to groom the golden retriever is to use a specialty or heavy-duty brush. A-Z-Animals recommends the GoPets two sided dematting brush.

The brushing can be preceded by a very rigorous bath to loosen some of the fur, but make sure the dog is dry before attempting to groom it. The nails should be kept trim on a regular basis as well. And if possible, you should regularly clean out the ears to reduce the chances of an infection. For shampoo, A-Z-Animals recommends an organic oatmeal based shampoo good for sensitive skin.

One of the breed’s most appealing traits is the ease with which these dogs can be trained to perform tricks or tasks. Golden retrievers will want to do what they’re told, but the dog also needs a focused training regime or it could become distracted easily. If socialized and trained from an early age, meaning up to around four months, then they can be seamlessly integrated into the family with much less of a tendency to nibble or bark. But even adult dogs are trusting and friendly toward almost anyone it encounters and therefore might take easily to training. Since this breed is so loyal and eager to place, training often comes naturally and effortlessly.

The golden retriever is a good athlete and work dog, so it excels when given an objective to complete. The breed is especially proficient at sports and agility competitions.

The golden retriever is an active breed of dog that requires an outlet for all of that pent up energy. It is therefore a good idea to give your dog as much as 45 minutes of exercise throughout the day, plus additional mental and physical stimulation.

You should also try to keep the dog frequently entertained by toys and chewing items. If it does not receive an adequate level of activity, then it might engage in destructive behavior around the home. Before buying this breed, make sure you have plenty of indoor and outdoor space for activity. You can also take this breed with you on your walk, run, or bicycling.

If you have access to an open space for the dog to play fetch A-Z Animals recommends the ChuckIt ball launcher for golden retriever exercise.

A golden retriever puppy is very eager to work and play but lack a lot of discipline. If you obtain the dog from its time as a puppy, then you should immediately put it through training to form a strong bond with your dog and teach it the basics. Exposing the dog to many different people and situations early may make it better adjusted as an adult. It is also a good idea to take the dog to a vet and have it examined for possible joint problems, which can develop early in life.

Because of its friendly and kind personality, the golden retriever is one of the most popular breeds to keep around children. It will tolerate a lot of rough and playful behavior with immense patience and its good, loyal personality even around toddlers and adolescents.

This also provides a constant source of companionship and teaches kids a sense of responsibility. The American Kennel Club lists the golden retriever as one of the best dog breeds for kids.

Dogs Similar to the Golden Retriever

The golden retriever is just one of many breed that qualifies as a retriever. Besides some mix breeds like the goldendoodle and golden Aussie, here are some of the most similar dog breeds:

Some of the most popular names for a golden retriever include:

What is bad about golden retrievers?

Besides some health problems and a bit of rambunctiousness, golden retrievers don’t necessarily have bad qualities, but they do require quite a lot of care and maintenance, as well as open space and attention. If you foresee a problem with meeting this dog’s needs, then you might want to consider another breed with less daily effort.

Golden retrievers are born to be excellent family dogs. Because of the amount of attention they need, it is a good idea to have a family member around to look after them and care for them at most times of the day. If you’re the only member of a household, then you should think carefully about whether you have the time and inclination to take care of the dog.

How do you groom a golden retriever?

For most of the year, you will only need to brush the dog once or twice a week. During times of heavy shedding, however, you should brush more often, preferably once a day. Consider giving the dog a bath beforehand to loosen up some of the fur. A-Z-Animals recommends the GoPets two sided dematting brush, as well as this organic oatmeal based shampoo.

How much do golden retrievers cost?

The golden retriever is quite popular and in demand, but you can still obtain a dog at a good cost. At the lower end of the price spectrum, it may be possible to adopt one for $500 or less. From a specialty breeder, the cost can range from $500 to $1,000. For a dog with a good pedigree, it can easily exceed $1,000 or even $2,000. Due to the number of potential health issues, however, the golden retriever may be more expensive to maintain and care for than the typical breed, so you should factor that into your potential budget.

How long does the golden retriever live?

The typical golden retriever has a lifespan of around 10 to 12 years. With a bit of luck and a genetic propensity for good health, some dogs may live a few years longer.

The temperament of the Golden Retriever is a hallmark of the breed and is described in the standard as kindly, friendly and confident. They are not one man dogs and are generally equally amiable with both strangers and those familiar to them. Their trusting, gentle disposition therefore makes them a poor guard dog.

Any form of unprovoked aggression or hostility towards either people, dogs or other animals, whether in the show ring or community, is completely unacceptable in a Golden Retriever and is not in keeping with the character of the breed and as such is considered a serious fault. Nor should a Golden Retriever be unduly timid or nervous.

The typical Golden Retriever is calm, naturally intelligent and biddable, with an exceptional eagerness to please. They love pleasing their owners as well as getting along with strangers.