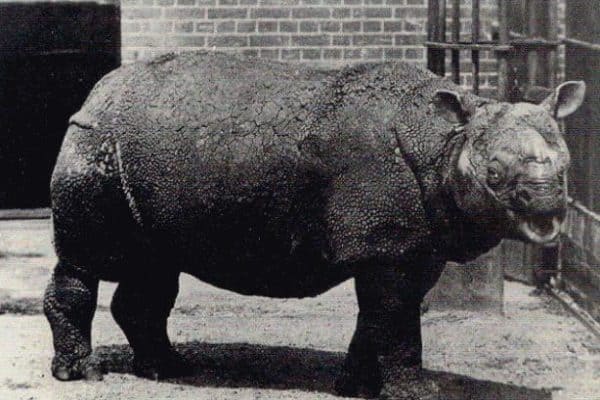 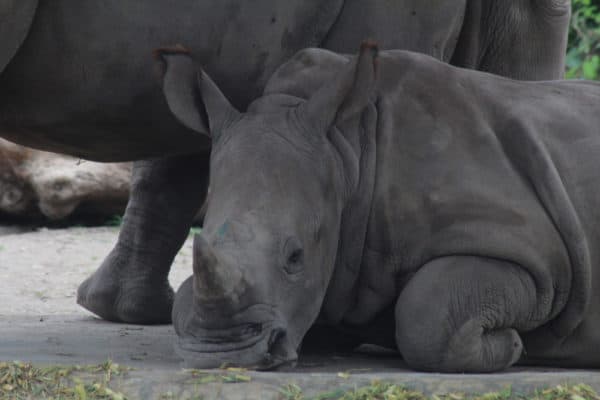 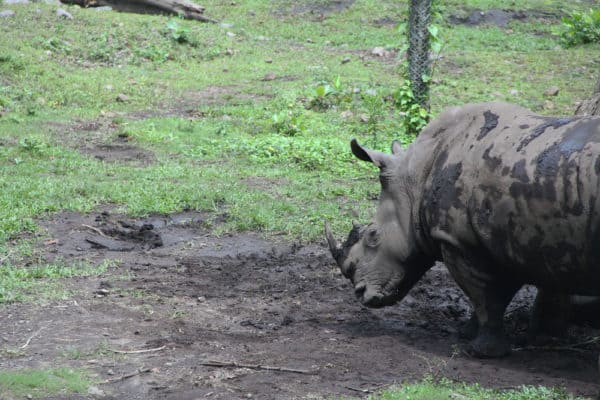 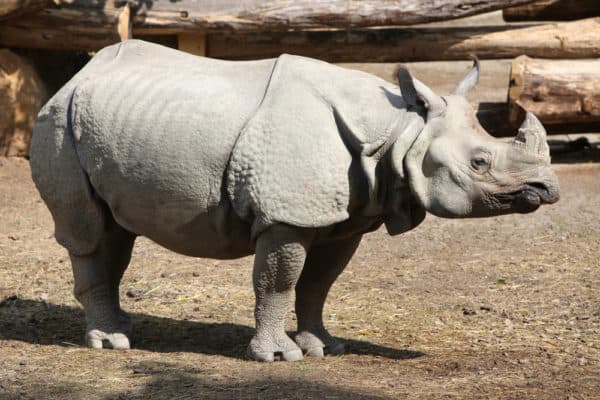 As of 2019, its estimated just 72 Javan rhinos survive in a single national park named Ujung Kulon on the Indonesian island of Java’s western-most tip. However, with no poaching of the species reported in more than 25 years at Ujung Kulon, there’s hope for the species’ survival.

The Javan rhino closely resembles Indian rhinos. Both species have a single horn, though female Javan rhinos often lack a horn or have a small “nub” on their nose. In addition, the Javan rhino’s skin folds aren’t as pronounced as the Indian rhino. This gives the species less of a look of having “body armor.”

Due to the extreme rarity of Javan rhinos, they’ve been studied the least of all rhino species. Today, few pictures are taken of Javan rhinos, with most study coming from camera traps in the dense forests it inhabits in Ujung Kulon National Park.

The Javan Rhino primarily inhabits dense lowland rain forests, tall grass and reed beds that are plentiful with rivers, large floodplains, or wet areas with many mud wallows. The range of Javan rhinoceros once stretched from Bengal, through Southeast Asia and down to Sumatra but today, the Javan rhinoceros is only found on the island of Java.

Where the Javan rhinoceros is found today: Ujung Kulon

Today, the Javan rhino is known to survive in just a single habitat, the Ujung Kulon National Park on the western edge of the island of Java. The national park measures only about 498 square kilometers (192 sq. mi), which means all Javan rhinos live in an area about the same size as the city of Tulsa, Oklahoma.

While Javan rhinos were either hunted into extinction or lost their habitat across Southeast Asia, they’ve survived in Ujung Kulon after unique circumstances. In 1883 a massive volcano named Krakatoa erupted off the coast of Indonesia and decimated surrounding areas. After the event, humans fled the area, but rhinos and many other critically endangered species began repopulating there.

Today, Ujung Kulon provides a protected environment that has allowed Javan rhino populations to stabilize, but it can only support a limited amount of rhinos within its borders.

Javan Rhino Population -- How Many Javan Rhinos Are Left?

The population of Javan rhinos was estimated at 72 individuals by the International Rhino Foundation in 2019.

While this population makes the Javan rhino one of the most critically endangered mammals on Earth, it has been stable for more than 30 years and their population has increased from an estimated 50 individuals across the past decade.

Today, both the Indian Javan rhinoceros and the Vietnamese Javan rhinoceros have been declared extinct. A small species of Javan rhinos were found in Vietnam’s Cat Tien park, but the last surviving member of the subspecies was found poached in 2010.

The Javan rhino is a herbivore that browses across shrubs, bushes, and saplings. Javan rhinos browse the densely vegetated sub-tropical forest for leaves, flowers, buds, fruits, berries and roots which they dig up from the ground using their horns.

Due to Javan rhinos being restricted to a small habitat, it’s hard to know how varied their diet was across their historical range. With Javan rhino populations having ranged all the way to the dense grasslands of India, it’s likely the species once grazed as well.

The Javan rhino faces few predators in the wild. Javan tigers existed in Ujung Kulon until the 1960s, but have been declared extinct. A small population of Javan leopards survive in Ujung Kulon and could prey on rhino calves and weaker individuals.

With no human poaching reported in the rhino’s surviving habitat in the past 25 years, its greatest threat today is a lack of genetic diversity that threatens breeding numbers.

With an extremely small population and long gestation periods, the birth of any Javan rhino is closely monitored. In December 2019, four new calves were spotted, increasing the population to an estimated 72 rhinos.

Like all rhino species, the Javan rhino has a long gestation period which makes repopulating challenging. Since no Javan rhinos are held in captivity, their gestation period isn’t precisely known. However, its believed to be roughly 15 to 16 months.

View all 9 animals that start with J

Why is the Javan rhino so endangered?

The Javan rhinoceros saw its population precipitously declines in the early 19thand 20thcentury from poaching that cleared the species out form much of its historical range.

However, today the greater threat to Javan rhino’s is habitat loss and the difficulty of rebounding from such low population levels. With an estimated 72 Javan rhinos left in just a single national park, the species is reaching the limits of its population growth at Ujung Kulon National Park. However, with few remaining habitats left in Java, conservation groups and the government of Indonesia have struggled to find a second viable environment for the Javan rhino. As of late 2019, the plan is to continue expanding Ujung Kulon to give the Javan rhinos more habitat to expand.