More Great Content:
An Absolutely Gigantic Moose Makes These Grizzlies…
See The Footage of The Rarest Bear…
Silverback Gorillas vs Grizzly Bears: Who Would…
Why Did Cave Bears Go Extinct?
5 Massive Bears Larger Than a Grizzly
Watch a Grizzly Drag a Moose Calf…

Written by Angie Menjivar
Published: August 10, 2022
Share this post on:
More Great Content:
An Absolutely Gigantic Moose Makes These Grizzlies…
See The Footage of The Rarest Bear…
Silverback Gorillas vs Grizzly Bears: Who Would…
Why Did Cave Bears Go Extinct?
5 Massive Bears Larger Than a Grizzly
Watch a Grizzly Drag a Moose Calf…

Katmai Country is a protected area in Alaska that was established in 1918. Across these breathtaking spaces, over 9,000 years of human history remain protected along thousands of brown bears and salmon habitats.

Throughout the national park, you can find several different mammals, including brown bears, gray wolves, and even humpback whales. The Katmai National Park service is clear about bear encounters. If you visit this area, you will likely encounter a bear.

They offer a full bear encounters guide to help you navigate these encounters with tips like “hike and travel in groups” and “do not approach bears.” If a bear attacks, they recommend you “fall to the ground face down on your stomach with your legs apart.”

This video starts with a shot of a man hiking through tall grass, approaching a small trail. In the background, there are several tall trees, and just behind those, you can make out some bears off in the distance, standing on that same trail.

The man looks over at them and keeps his pace steady as he makes his way out of the brush. Just as he’s passing by on the screen, you can see that the two grizzlies in the back have gotten spooked by something. They both jump backward and turn to run.

One of the bears runs up a grassy hill while the other follows the trail—straight for the man who has just made it onto the trail himself. “Hey! Hey! Back up,” he yells as he takes several steps backward back into the tall grass.

The bear acknowledges him with a look but keeps on running, making its way off the trail and into the tall grass in the opposite direction of the man. After this encounter, the man can be seen getting back onto the trail to finish his hike.

He stops for a moment and looks back to make sure the grizzly isn’t stalking him before continuing on his way. The cameraman says “Whoa, bro” to him as they both breathe a sigh of relief.

“You got bear spray?” he asks, as he pans the camera over to the bear that is now a bit further away and standing on its hind legs.

“That was a crazy charge, man,” he says, obviously still processing the encounter.

Everything You Want To Know About Muntjac Deer Face Scent Glands 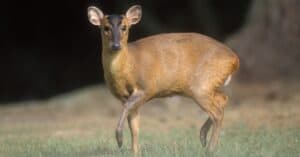