There are 8 different species! 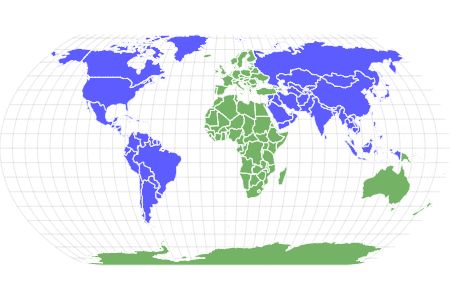 View all of our Bear pictures in the gallery.

View all of the Bear images!

Certain Asiatic bears build nests in trees similar to that of a bird.

There are eight different species of bears across the world with a conservation status ranging from vulnerable to least concern. Depending on the bear species, habitats include North America, South America, Europe, Asia, and the northern-most polar regions. While not ordinarily a threat to humans, bears are animals that can be very dangerous if startled, provoked, or approached when young bears (cubs) are present.

There are eight unique species of bears that vary in size, appearance and food preference. You can predominantly find them throughout North America, South America, Europe and Asia. The bear species types include:

The family name for the bear species is Ursidae and Ursus is the genus, which means bear in Latin. The following are the eight bear genus species of the bear family:

Bears are distinctive by their fur-based bodies and strong claws. Some climb trees and others swim. Certain bear subspecies have even more distinctive markings around the eyes and on their chest that set them apart from the others.

Various species of bears have adapted to their environments over time. For example, polar bears are white to blend in with the snow and North American black bears have versatile eating habits that include corn crops and cactus depending on their region of residence.

All bears have an acute sense of smell, hearing and sight. They often hear and smell humans before they see humans and flee as a result. Bears are solitary creatures by nature. However, mothers and cubs will travel together, and bears will travel in pairs during mating seasons.

Many species of bears will hibernate for long periods to save energy during winters when prey and other food sources are in short supply. Bear will hibernate in locations such as caves, hollowed out trees, holes they dig in the ground, and dens that bears have dug in prior years. Prior to hibernating bears will become hyperphagic, which means they’ll eat excessively to build energy reserves. For example, Himalayan black bears will reach up to 400 pounds before they hibernate. That’s significantly higher than their normal weight, which is between 200 and 265 pounds!

However, not all bear species hibernate. Panda bears will adjust their latitude throughout the year to find more abundant seasonal food rather than hibernating. Likewise, Asiatic black bears in southern climates will also skip hibernating. Finally, while polar bears do not hibernate, pregnant polar bears will construct maternity dens where they stay for long periods in a dormant state.

The geographic regions of bear species are as diverse as their appearance. Most bear species prefer to live within the canopy of a dense forest. You can find bears throughout North America, Europe, Asia and Africa. They never made it to the Antarctic or Australia. While bears are curious by nature, many times, if they hear or smell a human, they will hide up a tree. Some bears prefer higher elevations, such as the Asiatic black bear, and others prefer coastal regions, such as polar bears. You will even find bears in desert climates, including the spectacled bears and American black bears. Bear populations that are unable to adapt to new habitats are vulnerable to extinction as their current homes are destroyed for development and for lumber.

Bears have proven they can survive on almost anything. Most bears eat vegetation, such as the panda bear eats bamboo. However, many North American bears have adapted to their environments and will eat other animals and fish, including elk, caribou and salmon. The polar bear, also referred to as the maritime bear, is a carnivorous animal as they typically eat seals, as well as whales and smaller walruses on occasion. And the sloth bear survives on ants and termites.

A growing concern exists for bears eating human food as it causes them to destroy property and even break into homes to seek out more of the same. Eventually, these bears are put down as they become an increasing threat to humans. This tragic result is avoidable as long as humans do not feed wild bears. On rare occasions, bears will eat a poisonous plant by mistake and die. Other than that, bears can eat almost anything to live.

While several bear species of today are vulnerable to extinction, only a few bear species or subspecies have become extinct in recent history. This includes the Californian grizzly bear in the 1920s and the Mexican grizzly bear in the 1960s. Both became extinct due to hunting. The same is true of the Atlas bear. The Atlas bear was the only bear native to Africa. It was hunted to extinction in the 1870s.

The giant panda bear was near extinction in recent times when drastic efforts were made to save the species. Many scientists believe the polar bear is under severe threat due to climate change. Their existence may be directly connected to their ability to adapt. Thousands of years ago, it is believed that a number of bear species existed before their extinction.

The giant short-faced bear was a carnivorous animal that stood 12-feet high, ran over 40 mph, weighed over 1,500 pounds and lived in the Northern half of North America. It became extinct around the end of the Ice Age due to loss of habitat. Cave bears resided in much of Europe and became extinct around 25,000 years ago before the last Ice Age began. They were believed to weigh up to 1,500 pounds just like the short-faced bear.

Bear cubs are particularly susceptible to any number of predators, such as coyotes and wolves; however, adult bears experience very few natural predators. The primary predators that target bears are other bears and humans. Illegal bear hunting is likely their greatest predator. Some cultures poach bears for their meat and various body parts and organs to sell on the black market. Environmental change is another significant threat to bears, their natural habitats and their food sources. And human deforestation and development are also threatening many bear species and subspecies.

A courting process does occur between a male and a female bear during the spring. Male bears are promiscuous and will mate with several female bears if possible over time. Only the largest males will mate due to the high level of competition. Because of this competition, female bears will also take on several partners in their life. However, during the courting and mating process, both bears became nearly inseparable. The season of breeding and mating lasts from May to early July. Females typically give birth in January and February.

Female bears mate and experience a fertilized egg and embryos much like humans. They will give birth to between one and six bear cubs. Mother bears are quite affectionate and protective. They will care for and den with their cubs for up to three years, often less. During this time, the cubs will feed on the mother’s milk and food gathered by their mother and themselves. When it is time to separate, the cubs do not take it well. As a result, siblings often stay together for a duration after the initial separation.

The average lifespan of each bear species varies, including:

It is important to note that most bear species live longer in captivity than in the wild. The averages listed above represent the average lifespan of a wild bear. The oldest age on record is representative of any bear regardless of being wild or captive. As bears age, their health begins to decline just as with humans, including dental health, eyesight and an overall dulling of the senses. This greatly affects their quality of life and ability to survive

Are Bears carnivores, herbivores or omnivores?

Most bears select their food source by adapting to their environments. While the panda bear is primarily a herbivore, it occasionally eats rodents or birds and is therefore considered an omnivore. The sun bear, North American black bear, brown bear, and Asiatic black bears are also omnivores. The polar bear is strictly carnivorous.

What Kingdom do Bears belong to?

Bears belong to the Kingdom Animalia.

What phylum do Bears belong to?

Bears belong to the phylum Chordata.

What class do Bears belong to?

Bears belong to the class Mammalia.

What family do Bears belong to?

Bears belong to the family Ursidae.

What order do Bears belong to?

Bears belong to the order Carnivora.

What genus do Bears belong to?

Bears belong to the genus Ursus.

What type of covering do Bears have?

Bears are covered in Fur.

In what type of habitat do Bears live?

What is the main prey for Bears?

What are some distinguishing features of Bears?

Bears have large teeth and paws and strong bodies.

What are some predators of Bears?

Predators of Bears include humans, wolves, and wildcats.

What is the average litter size for a Bear?

The average litter size for a Bear is 2.

What is an interesting fact about Bears?

There are 8 different Bear species!

What is the scientific name for the Bear?

The scientific name for the Bear is Ursidae.

What is the lifespan of a Bear?

How fast is a Bear?

A Bear can travel at speeds of up to 35 miles per hour.