This Male Lion Barely Breaks a Sweat Taking Down a 1,800LB Buffalo Solo

There’s no denying that lions are one of the greatest hunters in the animal kingdom. They are close to the top of the food chain due to their intimidating stature and reputation. Generally speaking, lions pursue their prey using one of two approaches. The first is by following them around. If you own a cat or have ever seen a wildlife documentary, you’ve probably witnessed this behavior.

They primarily hunt by remaining inconspicuous for as long as possible as they get closer to their victim. The lioness has an additional benefit over the male in that their leaner bodies enable them to hide in the grass for a longer period of time. When hunting, lionesses cooperate by encircling their prey while keeping them hidden.

But ultimately the prey will hear or see the lion coming, and then it will be a pursuit for them both. When the lion catches up to the victim, it uses its sharp claws to maul it, breaking its neck and rendering it paralyzed so that it can be transported back to the lion’s den.

The alternative method of hunting by lions is a little simpler. At this point, the male lion accompanies the lionesses in the hunt. This is exactly what we see in a viral video showcasing a pair of lions hunting a massive buffalo.

Going In for the Kill

A male and female lion approach a buffalo, who quickly starts to run away. It doesn’t take much for the feisty felines to keep up with the fleeing animal. The lioness eventually steps to the side and the male lion instantly jumps on the buffalo’s behind, digging its sharp claws into its back.

The male eventually wraps his teeth around the buffalo’s neck as the female starts tearing apart his hind legs. While it’s gruesome to watch, as someone mentions in the video, “It’s nature.”

A few more lions start walking toward the fresh kill but ultimately keep their distance. One comment on the video reads, “We’re not the only ones surprised by the lion’s ability to take down the buffalo, but even the late-arrived males are so confident in their friend that they leave him alone to kill him. And they went to unload their other instincts and go after the female.”

One thing that’s shocking about this video is the background. While watching, as soon as the buffalo is on the ground, look in the distance. You can see an entire herd of buffalo watching as they stand still in shock.

Another incredible thing about this footage is that the male lion is the one to take the prey down. It’s often thought that the female does all the work. This time, the duo shared the task and it resulted in 1,800 pounds worth of dinner! 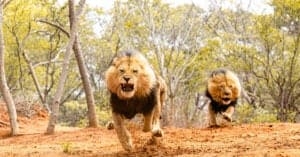 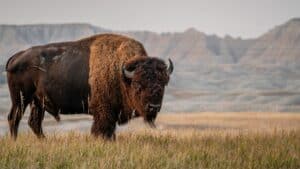 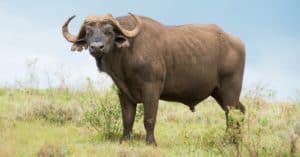 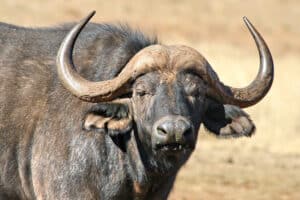 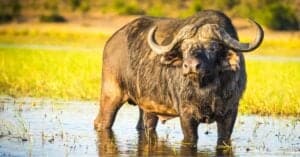 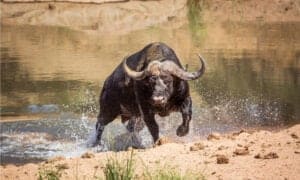 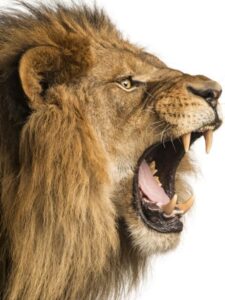