A bobcat in Pecan Island, Louisiana decided that a long jump was just another walk in the park.

A crab fisherman spotted the bobcat as it walked down a deserted pier. The supports were spaced far enough apart that the bobcat had to jump from pylon to pylon As the animal approached a long distance of open water, it climbed up on one pile on. Maybe it was trying to get a better look?

Whatever reason the bobcat had for slinking along, it used its instincts to calculate the distance of its jump with amazing precision. These animals are fierce predators that rely on their instincts.

It climbed up to the last pylon and sat on all fours, starting across the water at the next support. Bobcats are agile jumpers and this one lived up to its reputation.

The distance was easily five times the bobcat’s length. To get ready for the jump, the animal let its front feet travel down the front of the support and pushed off with its legs. It soared through the air, landing on the next support structure with ease.

Just as quickly, the bobcat jumped to the next support. And then the next one. It made a total of four jumps before it eventually settled back into a walk.

There was a long plank across some of the support structures. The bobcat walked to the end with ease, as if it was nothing to jump across open water like that. Jumping to another plank, the bobcat went into the marshy grasses to continue its day.

“We were just out fishing for blue crab in Pecan Island, LA and this huge bobcat came out across the pier,” wrote the man who shot the video. “I grabbed my phone thinking he was about to get wet, but he surprised us all.”

The video is less than a minute long but shows the power and agility of these amazing animals. 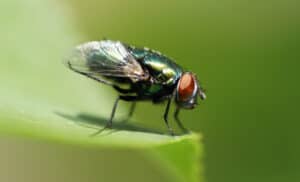 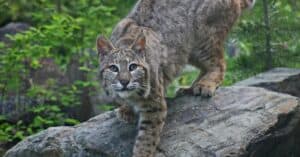