About double the size of a domestic cat!

Click through all of our Bobcat images in the gallery. 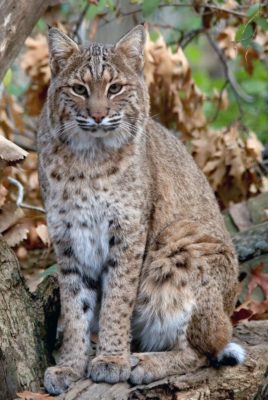 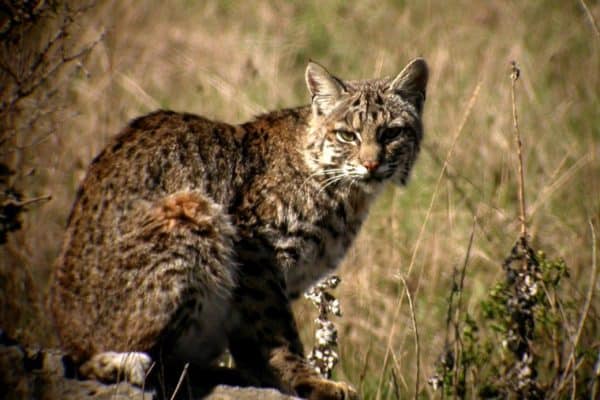 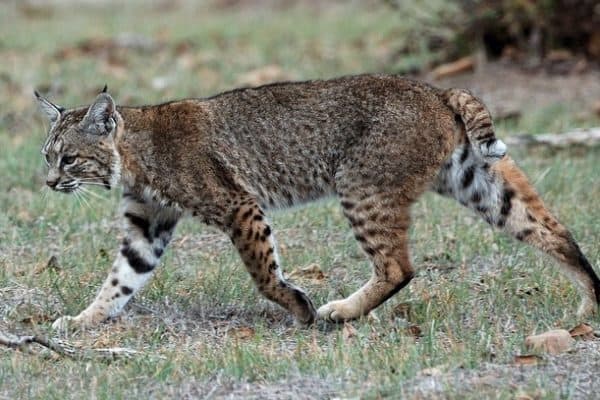 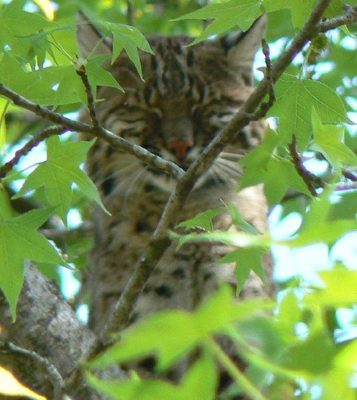 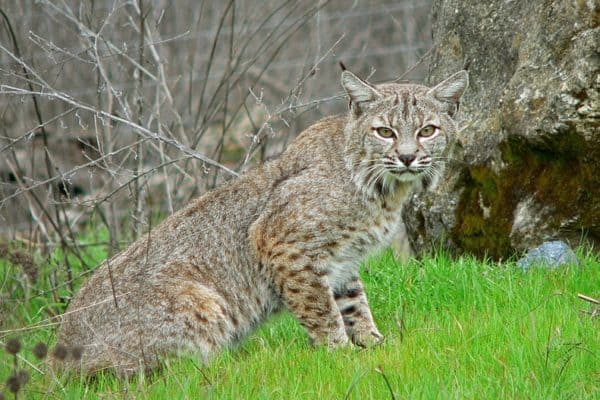 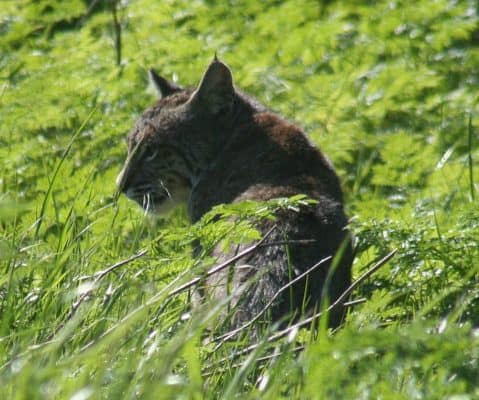 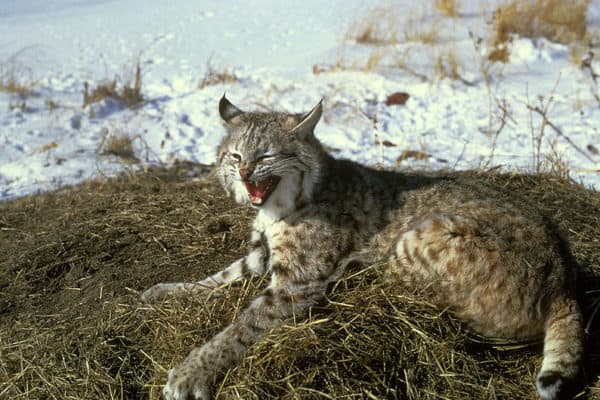 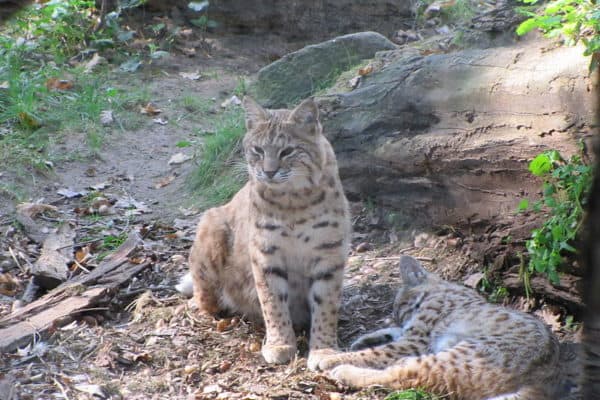 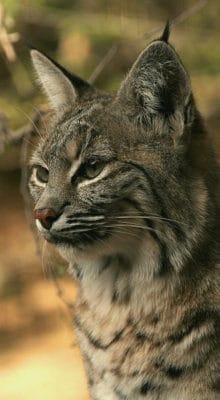 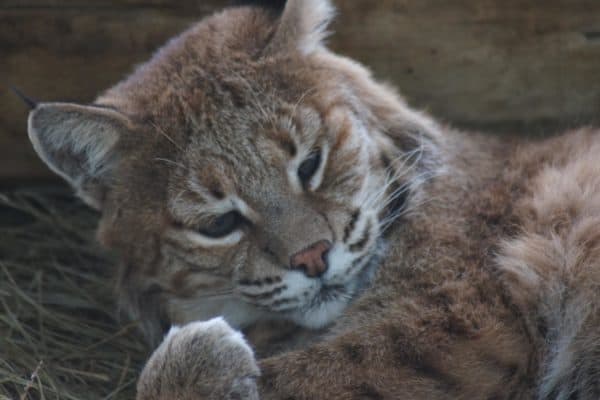 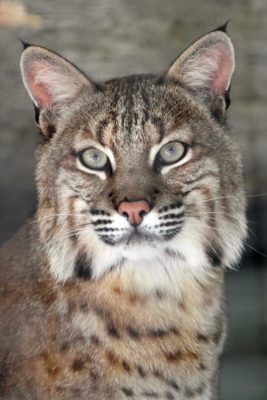 View all of the Bobcat images!

The Bobcat is a medium-sized animal that is found in a variety of habitats across the southern half of North America. They are widespread and adaptable predators that are closely related to the larger and more northerly dwelling Canadian Lynx with the biggest difference being that the Bobcat only has a small “bobbed” tail, from which it gets its name. Measuring about double the size of a domestic cat, the Bobcat has the greatest range of all North American felines but their secretive nature means that they are seldom seen by people. There are currently twelve recognised sub-species of Bobcat which vary in their colouration and geographic range, with individuals found in mountainous forest being darker with more markings than their lighter-coloured cousins that are found in more arid, semi-desert regions.

Due to the fact that the Bobcat belongs to the same family as the Lynx, these animals are similar in appearance but not at all the same. The Bobcat is smaller in size and has smaller feet and ear tufts than the Canadian Lynx, and often tends to be darker in colour. Bobcats have beige to brown or reddish fur that is mottled or spotted with the intensity of these markings depending on the individual and where it lives (those found in more open, arid areas tend to have fewer markings than those found amongst dense cover). The underside of the Bobcat is white so the darker spots are more distinctive and they also have a white tip to their short, black tail, which only grows to around 15cm in length. Like the larger Lynx, the Bobcat has ear tufts that are thought to heighten their hearing along with also having a ruff of longer fur around its face.

The Bobcat is the most widely distributed of all North American felines and is found across North America from southern parts of Canada right down to southern Mexico. They are incredibly versatile animals that have adapted to living in a variety of different habitats throughout the three different countries. Although Bobcats are animals that are known to prefer rocky hillsides that are well-vegetated, they are found in numerous different habitats throughout their natural range including mountain woodlands, coniferous forest, swampland, deserts and even in suburban areas in some places. The exact appearance of the Bobcat depends on what kind of habitat it is found in as the differing coat colours allow the individual to remain as camouflaged as possible in its surroundings. The historical range of the Bobcat once extended right across North America but the capture of them for their fur and loss of their natural habitat has led to the disappearance of them in some areas.

The Bobcat is a solitary and nocturnal animal that is most active in the darkness of night, tending to hunt most during dawn and dusk. During the day, Bobcats sleep and rest in dens in the form of a rock crevice or hollow tree with one individual having a number of dens within its home range. Bobcats are highly territorial animals and mark their ranges with scents from their urine and faeces and distinctive claw marks on trees to alert others of their presence. Males patrol a large home range which often overlaps a number of smaller female territories but the two will not interact until the breeding season which begins in the winter. At other times of the year though, Bobcats tend to avoid one another to reduce the chances of them being injured in a fight.

Bobcats can only be found together during the breeding season when both males and females can mate with multiple partners and after a gestation period that last for 8 – 10 weeks, the female Bobcat gives birth to a litter of up to 6 kittens in a safe and secluded den. Bobcat kittens are born blind and open their eyes after about 10 days, feeding on their mother’s milk until they are old enough to begin consuming meat. Most births occur in the late winter or early spring with Bobcat kittens usually remaining with their mother until the next winter when they are around eight months old and have learnt how to hunt independently. Female Bobcats tend to have a single litter every year and after mating, the male Bobcat plays no part in rearing the young.

The Bobcat is a carnivorous feline meaning that it only hunts and eats other animals in order to gain the nutrients that it needs to survive. Bobcats mainly hunt small mammals like Rabbits, Hares and Mice along with Birds close to the ground and the occasional Lizard. During the harsher winter months they are also known to hunt larger animals including Deer and will also feed on fresh carrion. The Bobcat is an incredibly elusive predator that hunts its prey by stalking it silently in the dark before pouncing on it with incredible force, and despite their size, Bobcats are known to be able to kill animals that are much larger than themselves. In areas where growing Human settlements have encroached on the Bobcat’s natural habitat, they have also been known to take occasional livestock such as poultry and sheep.

The Bobcat is a fierce and dominant predator in its natural habitat with adult Bobcats therefore being threatened by few animals, the biggest concern to them being Cougars and Wolves. The small and vulnerable Bobcat kittens however, are preyed upon by a number of predators including Coyotes and Owls that are able to hunt the kittens whilst there mother has gone off to hunt. The biggest threat to Bobcat populations throughout North America is people that have previously hunted the Bobcat to near extinction in some areas for their soft fur. In areas where Bobcats are now forced to share their natural ranges with growing numbers of people, they have also been hunted by farmers who fear for their livestock. Despite the fact that they are very adaptable animals, Bobcats are also been threatened by habitat loss with populations being pushed into smaller and more isolated regions of their once vast natural range.

The Bobcat is also known as the Red Lynx due to the fact that the two are very similar in appearance but the Bobcat tends to be much darker and richer in colour than their northern relatives. They are incredibly secretive yet powerful animals that are able to pounce on their prey from up to three meters away before delivering a fatal bite, allowing Bobcats to also hunt animals that may be up to double their own size. Although Bobcats are generally quiet and not greatly vocal animals, the fierce growls and snarls that they make when they are hiding often leads people to believe that there is a Mountain Lion in the area.

Bobcats have historically dominated a wide variety of habitats across North America with the Bobcat known to people all over the continent, having roots in Native American folklore and in tales of the first European settlers in the Northern USA and Canada. However, the beauty, softness and density of the Bobcat’s fur lead to an increased value in their pelts and therefore the hunting of them from the early to mid 1900s that completely decimated populations particularly in the mid-western and eastern USA. Although they are now internationally protected, the hunting of Bobcats still continues in some areas, particularly those with the densest populations. They are also seen as pests by farmers that hunt Bobcats to protect their livestock, particularly in Mexico where it has led to the Mexican Bobcat being listed as an Endangered species.

Today, the Bobcat is listed by the IUCN as an animal that is of Least Concern from becoming extinct in its native environment in the near future. Since the international protection of the Bobcat in the 1970s put an end to the extensive trading of their fur, populations have been able to recover and are stable throughout much of their natural range. However, in areas where there is increasing levels of Human activity, numbers are still declining due to both hunting and habitat loss. There are estimated to be between 800,000 and 1,200,000 Bobcat individuals left in the wild of North America.

View all 92 animals that start with B

Are Bobcats herbivores, carnivores, or omnivores?

Bobcats are Carnivores, meaning they eat other animals.

What Kingdom do Bobcats belong to?

Bobcats belong to the Kingdom Animalia.

What class do Bobcats belong to?

Bobcats belong to the class Mammalia.

What phylum to Bobcats belong to?

Bobcats belong to the phylum Chordata.

What family do Bobcats belong to?

Bobcats belong to the family Felidae.

What order do Bobcats belong to?

Bobcats belong to the order Carnivora.

What type of covering do Bobcats have?

Bobcats are covered in Fur.

What genus do Bobcats belong to?

Bobcats belong to the genus Lynx.

Where do Bobcats live?

In what type of habitat do Bobcats live?

What are some predators of Bobcats?

Predators of Bobcats include cougars, wolves, and coyotes.

How many babies do Bobcats have?

The average number of babies a Bobcat has is 3.

What is an interesting fact about Bobcats?

Bobcats are about double the size of a domestic cat!

What is the scientific name for the Bobcat?

The scientific name for the Bobcat is Lynx rufus.

What is the lifespan of a Bobcat?

What is a baby Bobcat called?

A baby Bobcat is called a kitten.

How many species of Bobcat are there?

There are 12 species of Bobcat.

What is the biggest threat to the Bobcat?

The biggest threats to the Bobcat are hunting and habitat loss.

What is another name for the Bobcat?

The Bobcat is also called the red lynx or wildcat.

How many Bobcats are left in the world?

How fast is a Bobcat?

A Bobcat can travel at speeds of up to 34 miles per hour.