A first glance, at this title is quite alarming! After all, who wants to see a child in danger of being injured by a shark? But we’ve done the research for you and sourced the full version of this short clip and the explanation of what was happening which is very reassuring. This incredible scene shows a child on a boogie board being pursued by a juvenile great white shark.

Because of the shark’s immaturity and behavior, we know that the child is not in danger at any time. Sharks have an unfortunate reputation but they are fascinating and curious animals as we see in this clip. At the end, this young shark loses interest in the human and swims away.

This awesome animal is found in oceans all over the world mainly in temperate and tropical coastal waters. They can grow to 16 feet in length and weigh up to nearly 5,000 pounds making them the largest predatory fish species in the world. The shark in this vid is young and therefore less dangerous. Great Whites reach sexual maturity at around 17 years old and can live for at least four decades.

The boogie boarder in this vid may not be able to see the shark at all even though we can clearly see it from above. If he is aware, he is playing it exceptionally cool! Sharks are actually very well camouflaged when they hunt by stealth at the surface.

Their skin, which is made up of tiny tooth-like structures called denticles, is a slate-grey color and this hides them when they are on the rocky shores at the coast. Their bellies are bright white – hence their name.

The light color blends in with sunlight glinting on the surface of the water and makes them even harder to see. Prey such as sea lions and seals can’t spot them very easily either!

Half of all shark attacks are down to the great white so it is useful to be able to spot one!

They have a distinctive appearance. You should be able to recognize the torpedo-shaped body with a pointed nose. The powerful and crescent-shaped tail fin is used to propel them through the water at some speed. These sharks can reach a top speed of 25 miles an hour making them the fastest swimmers in the sea.

A pair of large pectoral (side) fins stops them from sinking and their infamous dorsal (back) fin helps them to balance and change direction. The jaw is also very characteristic. It has around 300 serrated, triangular teeth which are arranged in several rows.

The myth that sharks have poor eyesight is simply not true. This great white can see the boogie boarder very well – they have just chosen not to attack!

Is it Normal for Sharks to Stalk their Prey?

Yes, it is normal for sharks to stalk their prey in the wild. Sharks circle their prey when they are hunting and spot something in the water. It may not be due to hunger, it may be due to curiousity since sharks are naturally curious creatures.

Sharks have great vision, they will often rely on their ability to detect the electric fields of hidden prey and are forced to take extra time to fully understand what they are stalking. 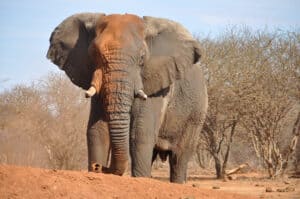