A desert is not characterized by the amount of sand that’s in it. Instead, deserts are classified by the prevailing temperature, the amount of precipitation, geographical location, and the desertification causes.

By definition, a desert is a barren area with little to no precipitation. This doesn’t mean water only, as precipitation can fall as fog, mist, or snow. Lack of precipitation results in hostile living conditions for both flora and fauna. One term often used to characterize deserts is arid. It doesn’t refer to how hot a desert is. Instead, it showcases an area’s severe lack of available water.

The name desert comes from ecclesiastical Latin and means an abandoned place. This was its initial meaning, and it’s the reason why we still find the expression deserted island. Regardless of how green the island was, it was called deserted if no humans inhabited it.

If these desert facts sparked your interest in this type of region, you should keep reading! We’ll now describe in detail how deserts form, what types are there, and then list some of the most famous (and not only) deserts worldwide.

What causes deserts to form?

[Image needed. – Caption: The formation of a desert begins with moist air that rises near the Equator.]

The formation of a desert begins with moist air that rises near the Equator. The rising air cools and transforms (via condensation) into clouds that then become rain sources. Currents of air move these clouds towards the pole. On this trip, the air within the clouds releases moisture as precipitation.

However, when the air returns, it gradually gets warmed and becomes compressed as wind currents force it to descend. As a result, air humidity falls even lower than after releasing precipitation.

In the end, certain areas are met with no clouds and no rain as the air is very dry. At the same time, dry air paired with strong (or even moderate) wind currents accelerates evaporation and turns regions arid.

This was the most common method of desert formation – but not the only one.

Deserts can be caused by the presence of mountain ridges

Mountain ridges can stop wet currents from reaching certain areas. The perfect example is the Patagonian Desert, located in the Andes. Oceanic currents that carry humidity and create clouds with precipitation are stopped by the multitude of mountain ridges in the area.

In this case, rain falls on only one side of the ridge, while the other side and the region beyond it turn arid.

Deserts can be caused by cold oceanic currents

Cold oceanic currents are a source of constant wind but little to no humidity. In most cases, the best that these currents can do is generate fog over an area. However, it would require immense amounts of fog (or a prolonged foggy period) to create the precipitation level necessary to prevent an area from turning arid.

Several coastal deserts in the world (Sechura Desert, Namib Desert) are constantly exposed to cold oceanic currents. The worst part is that these constant winds prevent vegetation from growing and keep on reshaping the landscape.

As mentioned above, multiple factors are considered when classifying deserts – from total yearly precipitation to temperature, humidity, etc. The result is five types of deserts (with some sources mentioning only four). These types account for temperature and location, as you’ll see below.

This type is also known as hot and dry deserts, as they are just like that throughout the year. In such deserts, the temperatures can get extremely high – up to 122 Fahrenheit (50 Celsius). Subtropical deserts are as arid as they can get and receive two times the normal amount of solar radiation.

Despite the aforementioned, subtropical deserts experience below-freezing temperatures during the night. This is why camping overnight in such a desert is never a good idea. The same applies to waiting for it to rain. Some deserts might receive more than 1 inch (25 mm) of precipitation a year, but the high temperatures can make raindrops evaporate before they reach the ground.

Subtropical/hot and dry deserts are the Sahara, the Kalahari, and the Simpson desert.

[Image needed. – Caption: Rain shadow deserts are bordered by mountain ranges and ridges that prevent wet currents and clouds from reaching them.]

Rain shadow deserts, unlike subtropical deserts, are only semi-arid. This means that they receive at least about 1.5 in (38 mm) of precipitation a year. At the same time, they are not as hot as subtropical deserts and have seasons. Naturally, these are long and hot summers and a couple of winter months. In rain shadow deserts, temperatures don’t usually go higher than 100 Fahrenheit (38 Celsius).

They are called rain shadow deserts because they are bordered by mountain ranges and ridges that prevent wet currents and clouds from reaching them. This type of desert is inhabited by nocturnal animals that spend their days burrowed underground.

The rain shadow deserts are the Gobi and the Patagonian desert.

[Image needed. – Caption: Interior deserts are found in the heart of land masses.]

Interior deserts are classified by their location within a continent. Just as their name implies, this type of desert is found in the heart of land masses. They can be rain shadows or subtropical deserts. This is the reason why interior deserts could be considered a subtype or a different type of classification (and why some sources mention only four types of deserts).

An interior desert is the Gobi desert.

One characteristic of coastal deserts is their heavy fog, which can last for long periods. Despite that, rainfall is still infrequent. This is because wind currents prevent moisture and wet air from reaching the actual deserted area. Coastal deserts receive, on average, 3 to 5 inches (76 to 127 mm) of precipitation per year.

Another major characteristic of this desert type is its ability to support plant life. This is because the soil is more absorbent, retaining water for various plant species such as rice grass and saltbushes.

Coastal deserts are the Namib and the Atacama deserts.

Last but not least, the Arctic and Antarctica are cold/polar deserts. The name polar is given by their position or location on earth. These two deserts are obviously cold throughout the year but still very dry. In their case, sand is replaced by snow and ice, and temperatures are the polar opposite of all other types of deserts.

Temperatures here average above and below freezing. Extreme cases and situations can create temperatures as low as -58 Fahrenheit (-50 Celsius). Polar deserts have wetter and drier seasons. During the wetter ones, they can receive up to 18 inches (457 mm) of precipitation per year. However, the average precipitation is 6-10 inches (152-254 mm).

Inhabitants of the polar deserts include seals, penguins, and polar bears.

Famous Deserts from Across the World

Despite creating hostile living conditions, deserts are a popular tourist destination. Many people enjoy the experience of trekking through the dunes, with no concrete buildings or skyscrapers on the horizon.

Here are some of the most famous deserts from across the world.

The Sahara Desert is believed to be, by many, the largest desert in the world. It has a surface area of 3.6 million sq. mi. (9.2 million km²). However, the Arctic and Antarctic Deserts are the largest, as you’ll soon see.

The desert is known for reaching across more than 10 countries and has common desert features. The Sahara is incredibly dry, features a lot of small and large dunes, and is home to various plants and animals.

What is interesting about the Sahara Desert is the fact that the region alternates between desert and savanna grassland every 20,000 years. In short, it is not a permanent desert.

[Image needed. – Caption: The Gobi Desert is home to the rarest bear in the world – the Gobi bear. ]

The Gobi is characterized by sandy and rocky parts – it is not a uniform sand area. At the same time, the Gobi Desert is undergoing constant expansion. The higher average temperatures, and the usual sand storms, push it into China.

[Image needed. – Caption: The Thar Desert is located in the northern part of India.]

Known as the Great Indian Desert, the Thar Desert is located in the northern part of India. It forms a natural border between this country and Pakistan. The desert has an area of 77,000 sq. mi. (200,000 km²), and it is the 20th-largest desert in the world.

Largest Deserts in the World

A List of the Hottest Deserts in the World 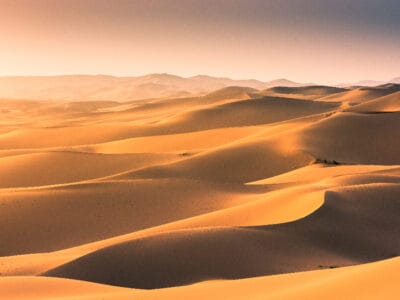 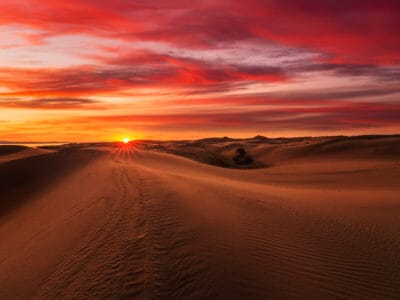 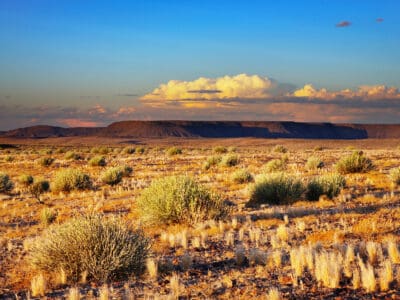 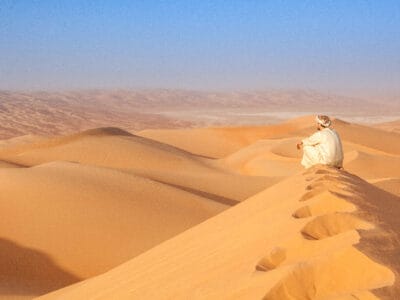 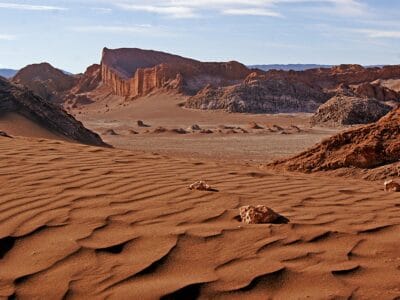 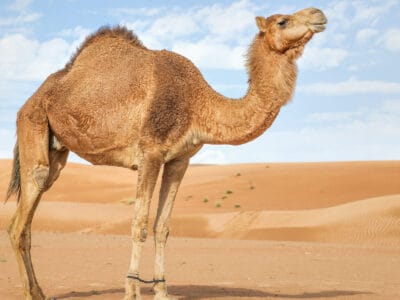 6 Incredible Survival Skills Animals Use to Live in Deserts 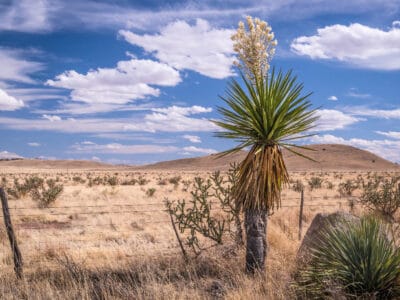 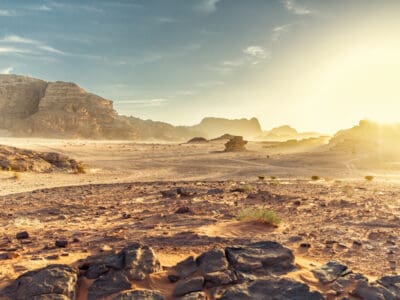 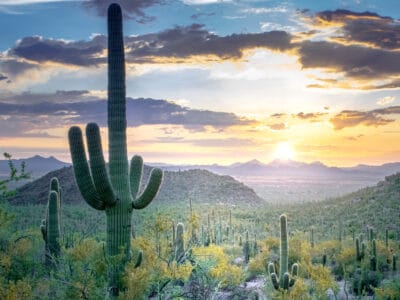 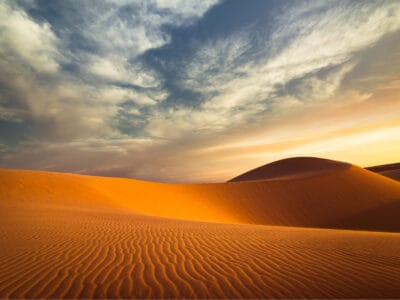